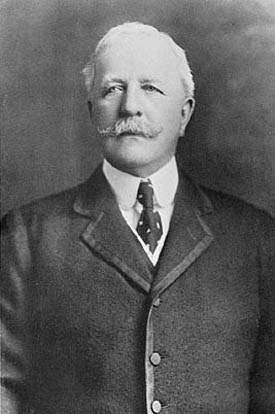 Sir Henry Vincent Meredith, 1st Baronet of Montreal ( &ndash; ), was a Canadian banker and President of the and the Royal Trust Company.

Born into 'a home rich in cultural elements' on Talbot Street, London (now the ), he was the fifth son of John Walsingham Cooke Meredith (1809-1881) J.P., of London, an Irish barrister who emigrated to Upper Canada in 1834 with Sarah (1818-1900), daughter of Anthony Pegler (1792-1871) of King's Stanley, Gloucestershire, whom he married the following year. One of Vincent's great uncles, Boyle Meredith (1788-1873), married Eliza Vincent, and it was after her family that he was given his middle name, which he preferred to use as his first. Eliza (1797-1870), was the daughter of The Rev. George Vincent (d.1850) J.P., of Shanagolden House, Co. Limerick, by his wife Eliza, the daughter of Joseph Gubbins (1742-1815) of Maidstown Castle, Co. Limerick. Vincent's well known brothers, collectively known as 'The Eight London Merediths', included and Sir .

Though the Merediths were protestant, Vincent's paternal grandmother was a Redmond of Killygowan (formerly of Redmond Hall, or 'The Hall'), Co. Wexford, a notable catholic family, and she counted amongst her first cousins three European Countesses, of the , Probentow von Wilmsdorff and Sutton-de Clonard. Vincent's father was a first cousin of Sir of Quebec, , Sir James Creed Meredith (1842-1912) of Dublin (the father of Judge also of Dublin) and John Henry O'Byrne Redmond (1825-1866) of Killoughter, Co. Wicklow, Count of the Papal States & Chamberlain to .

In 1867, Meredith joined the Bank of Montreal as a clerk and rose through the ranks to become the first Canadian born president of the bank from 1913 to 1927, when he was appointed chairman of the board. As president, his office was at the bank's headquarters at 119 St. James Street in . Amongst many other positions, Vincent Meredith was a member of the Montreal Board of Trade, a member of the of , the Royal Exchange Assurance Co., of London, England, the Royal Trust Assurance Co., of Montreal (also serving as that company's President for a time), the Assurance Company of Edinburgh and Dominion Textile. He served as Governor of , President of the , and President of the . He was created a hereditary of the by King George V for his wartime services to the nation in 1916. The Montreal Gazette said of him : cquote|Outwardly stern and commanding in appearance, he was really kind-hearted, considerate and tolerant. No situation ever deprived him of his poise. He never gave way to violent anger, preferring the rapier to the bludgeon as a weapon. A flash of his eye and a sarcastic phrase was sufficient to puncture conceit, rebuke stupidity or quell insubordination

His marriage in 1888 to (Isabella) Brenda Allan (1867-1959), the youngest daughter of Andrew Allan (1822-1901), President of the Allan Shipping Line (after his brother, ) and the Merchant's Bank etc. gave him additional wealth and powerful connections. As a wedding gift, his father-in-law gave him a parcel of land across from Ravenscrag (Sir Hugh Allan's home) on the corner of Pine Avenue and Peel Street, Montreal. In 1894 Vincent and Brenda employed the architect Edward Maxwell to build them a house there, "Ardvarna", a turreted, red brick , now known as Lady Meredith House. Maxwell had also previously designed their summer house at Mount St. Bruno, Quebec.

Brenda Meredith donated the 'Lady Meredith Cup' in 1920, the first ice hockey trophy in Canada to be competed between women in ankle-length skirts. Amongst other positions, she served as president of the Purple Cross (a service for the care of wounded and disabled horses on the battlefield during World War One), a director of the Society for the Prevention of Cruelty to Animals, vice President of the Women’s National Immigration Society, and was a high ranking member of the Imperial Order of the Daughters of the Empire. She was a member and benefactor of the .

Sir Vincent Meredith was a generous philanthropist. A founding member of the he served on its Board of Directors and was one of its benefactors. In 1909 he gave the Royal Victoria Hospital (where he solely sponsored an annual ball for the nurses) an automobile, Canada's first motor ambulance, but as with all his gifts and donations, refused to allow anything of it to be mentioned in the papers. It was also his idea to bring the famous neuro-surgeon to the Royal Victoria Hospital. At the Bank of Montreal he introduced the 'Sir Vincent Meredith Fund', which was set up for the female employees of the Bank to relieve them in a financial crisis, which is still in operation today. In his will he left just under six hundred thousand dollars to be shared between the Royal Victoria Hospital, McGill University and , Lennoxville. It was said that Sir Vincent took every opportunity to relieve suffering in Montreal and advance that city. He also donated the 'Sir Vincent Meredith Trophy' awarded to the Montreal Amateur Athletic's Association's best all round athlete.

The Merediths shared a keen interest in horses, and were said to have had a fine eye for them. Vincent rode with the Montreal Hunt and played polo in Seneville, and they both imported many fine horses from Ireland and England. His youngest brother, Llewellyn Meredith (1860-1933) J.P., was a highly respected judge at the Olympia Horse Show in England, and bred his own horses in Canada. Sir Vincent was also a keen fisherman. Both he and Lady Meredith had a great interest in music and art and were one of the most enthusiastic supporters of grand opera in Montreal. He belonged to many clubs in Montreal and England, and he was amongst the founding members of the Mount Royal Club in Montreal, the Ritz-Carlton Hotel and the Montreal Winter Club.

Sir Vincent Meredith died in 1929 without issue and as such his Baronetcy became extinct. His wife continued to live in their home until 1941 when she gifted it to the Royal Victoria Hospital to use as a s' residence. acquired the use of the property in 1975 and today it is known as "Lady Meredith House", home to the McGill Centre for Medicine, Ethics, and Law.

Sir Vincent and Lady Meredith are buried in a plot reserved for the Meredith family at Mount Royal Cemetery, Montreal. Buried there also is one of his younger brothers, (1854-1928), with his wife Elspeth Hudson Angus (1858-1936), daughter of . The other member of the family buried within the plot is a son of Vincent's father's first cousin, and a close friend of both of the brothers', (1862-1941) K.C. The members of this family in Canada and Ireland were a remarkably distinguished group, and they all remained very close to one another.