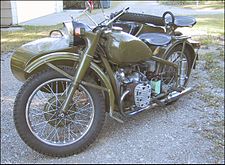 Chang Jiang (simplified Chinese: 长江; traditional Chinese: 長江; pinyin: Cháng Jiāng) is the transcribed brand name of motorcycles that were once manufactured by the China Nanchang Aircraft Manufacturing Company. It takes its name from the Chang Jiang River, also known as the Yangtze or, in English, the Long River.

The CJ750 motorcycle is based on the 1956 Soviet IMZ (Irbitski Mototsikletniy Zavod) M-72 which was derived from the 1938 BMW R71. Nearly all of them have sidecars. They are often erroneously referred to as BMW "replicas" when in fact, they are derivatives of the IMZ M-72.

Production began in the late 1950s or early 1960s. (Different sources cite different dates.) They were originally produced for the Chinese military and are powered by an air-cooled, four-stroke, opposed flat-twin engine displacing 746cc. The rear wheel is shaft-driven.

The most common models are:

The M1 which has a sidevalve (flathead) engine and a 6V electrical system. This model is a clone of the M72 and closely resembles the 1938 BMW R71.

The M1M is also a sidevalve, however it uses a 12V electrical system and is equipped with a reverse gear. It also has an electric starter where the M1 has only a kick-starter. All of these enhancements were designed by the Chinese.

The M1S (or "Super") uses an overhead-valve engine, 12V electrical system, electric starter and reverse gear. The OHV system is of Chinese design.

All three models use the same frame and sheet metal. The M1 and M1M are nearly identical in appearance, but they can be distinguished by observing certain details.

CJ technological history includes racing bikes, experimental engines and futile attempts at modernizing the appearance of a long obsolete machine. In the 1990s, China opened its markets to foreign motorcycle manufacturers which expedited the end of CJ750 mass production. Today, the marque is kept alive by interest from foreign hobbyists.

The CJ750 originated with the 1938 BMW R71, then, by way of the Soviet M72, found its way to China as the Chang Jiang. There are three popular theories that attempt to explain the technology transfer between Germany and the USSR. They are:

In 1940, the Soviets are said to have purchased several BMW R71s in Sweden. They were tested, evaluated, dismantled, and ultimately reverse engineered. Within two years, the Soviets were producing the nearly identical M72.

A Soviet aircraft engineer named Serdjukow had been an employee at BMW's Munich manufacturing plant since 1935. In 1940, he secured R71 blueprints and several bikes which were sent to Russia. The M72 appeared two years later.

Prior to the German invasion, the Soviets were building BMW R71s under license. BMW had discontinued R71 production in favor of the new R75 and other models. The R71 was considered obsolete and unsuited for military use.

In 1950, the Peoples Liberation Army Beijing No. 6 Automotive Works developed a military motorcycle by reverse engineering a German Zundapp KS500 motorcycle. The Zundapp-based machine entered production in 1951. 4,248 were built before military motorcycle production was transferred to the Hongdu and Xingjiang machinery plants. Both factories remain subsidiaries of the state-run aeronautics industry to this day.

By the mid-1950s, the Soviets considered the M72 to be obsolete. China would soon acquire all the tooling and produce their own M72s. In light of this, the Zundapp-based machine was abandoned.

The Chinese M72 was named the Chang Jiang 750. According to some sources, it entered production in November, 1957 at the state-owned Ganjiang machinery factory. Early production used Russian M72 parts. Early CJs were nearly identical to M72s.

The Chang Jiang drivetrain has been revised several times since production began. From 1957-66, CJs were equipped with so-called Type I engines and transmissions. This drivetrain was almost identical to those of the R71 and M72.

In September, 1966, production of the Type II engine and gearbox began. It was not until 1972 that the Type II engine replaced the Type I in general use. Continued use of the Type I engine in 1966-72 was the result of a surplus of Type I components. With so many Type I engines in use, parts remained in production until the early seventies. When the military serviced Type I bikes, they would replace the engines and/or gearboxes with Type II components. This was done for ease of maintenance, parts availability, and improved engine characteristics. Bikes with Type I engines often had their original gearboxes replaced with a Type II. Engines manufactured with a serial number of 661802 and higher are Type II.

In the 1960s, the factory was renamed the State-Owned Changjiang Machinery Factory.

In 1969, the CJ750 underwent some minor design changes, primarily related to sidecar frames and headlight-mounted switches. Gas tanks with built-in tool boxes appeared around this time.

In the late-1970s, the factory was merged with airplane manufacturer Guo Ying Hongdu Ji Xie Chang. At this time, a 6V OHV engine with 30 horsepower was being developed. Only a few of these engines can be found today. They were quickly replaced with a 12V, 32 horsepower version.

In December, 1980, a small number of 900cc, OHV engines were produced in response to the acquisition of BMW motorcycles by the armed police. Only a handful of these machines were built, probably less than ten. Only a few 900cc engines have been found.

The 750 OHV upgrade appeared in the mid-eighties and entered production at the Ministry of Aviation and Space Engine Factory in Nanfang, Hunan Province. This marked the introduction of the M1S model.

In 1986, the M1 model was upgraded with a 12V electrical system and a gearbox with reverse, and designated the M1M.

Although the CJ750 is no longer produced per se, many have been restored from old military stock or assembled from parts. The CJ750 has become popular with enthusiasts outside China.

Dealers outside China usually have a limited stock of the bikes. Most bikes are ordered from builders in China.

Parts and accessories are available through online dealers and auction web sites.

Importing into North America is done on a regular basis.

CJ750s are usually shipped fully assembled. Quality can vary widely, depending on a number of factors.

Owners generally perform their own maintenance since many shops either can't (or won't) service a CJ750. Because the technology is virtually the same as it was in 1938, basic tools and skills will suffice for most repairs. Technical information is widely available from online forums dedicated to these bikes.