I Want You (Savage Garden song)

I Want You (Savage Garden song)

Infobox Single
Name = I Want You 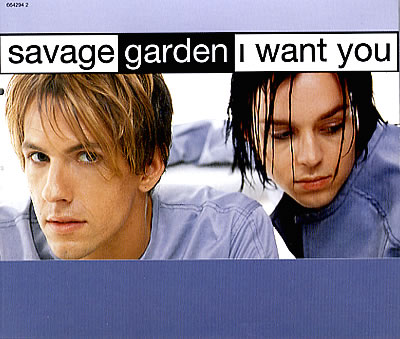 "I Want You" is the first single released by n pop group , released in in 1996 and internationally in 1997. It later appeared on their eponymous debut album "Savage Garden". The single hit number one in Canada, and peaked at number four on the U.S. and in their home country.

Two music videos were released for the song, a low-budget version in Australia and a second higher-budget version for U.S. and international release.

The single was the first to be released in the UK, reaching number 11. After the success of "" and "" (re-release) the single would see a second release in December of 1998, this time as "I Want You '98" with the Bascombe Mix being the lead track. The single charted at number 12, one place below the original, spending 3 extra weeks in the top 40 due to the Christmas period sales. Re-release CD1 came with a lyric sheet for "To the Moon and Back" and CD2 was a cardboard sleeved edition with free poster.

The U.S. version of the "I Want You" video was directed by .