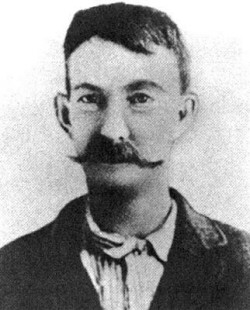 Edward Capehart O'Kelley (1858—, ) is remembered as the man who murdered ' killer, Robert Ford. A book, "Ed O'Kelley: The Man Who Killed Jesse James' Murderer", was written about him by , O'Kelley's great-great niece. O'Kelley's last name has been misspelled by historians and contemporary newspapers over the years as "Kelly" or "O'Kelly," with the letter "O" sometimes misused as his middle initial.

Little is known of O'Kelley's youth, except that his mother was Margaret Ann Capehart. He would have been a child during the vicious guerrilla warfare that divided the border region during the .

The murder of Robert Ford

Robert Ford, the man who befriended outlaw Jesse James in 1882 and then shot him in the back of the head, was operating a tent saloon in the silver mining camp of . On , , while Ford was preparing to open his saloon, O'Kelley walked into the tent with a shotgun. Ford had his back turned away from the front entrance. O'Kelley called out, "Hello Bob." As Ford turned around to see who was speaking to him, O'Kelley fired his shotgun, hitting Ford in the neck area and killing him instantly. O'Kelley did not say why he had shot him, though it was rumored that an infamous confidence man, , had convinced him he would be a hero for killing the unpopular Ford. However, this is unsubstantiated.

O'Kelley was convicted of murder on July 12, 1892 and spent ten years in prison before being released on October 14, 1902 due to health problems.

After his release, O'Kelley moved to . Shortly after his arrival in town, he was recognized by Otto Ewing of the Southern Club, a local gambling house. It is claimed that Ewing had been connected with Ford's saloon in Creede, and may even have been there when O'Kelley killed Ford. Ewing told people that O'Kelley was a dangerous man best avoided.

In December 1903, police officer Joe Burnett arrested O'Kelley as a "suspicious character". O'Kelley was staying at the Lewis Hotel, and when he had returned there after his release, he openly made threats that he was gunning for a man. Everyone knew he meant Officer Burnett. O'Kelley frequented the saloons on West 4th and 2nd Streets, which were known as the hang outs of criminals in the early years of Oklahoma City. On Wednesday, , , Edward O'Kelley was arrested by a police officer named Bunker. O'Kelley was released and went to his hotel, where he commented to others that the police had better not try to arrest him again.

On the evening of , , Joe Burnett was walking his beat on the south side of First Street, in front of the McCord & Collins building. Burnett encountered O'Kelley and greeted him politely. In reply, O'Kelley struck at the lawman and drew a revolver. O'Kelley told Burnett, "You come with me. I'll arrest you, you son of a bitch." As O'Kelley struck at the officer again, Burnett grabbed the gun with his left hand.

The two men began to wrestle in a life and death struggle. O'Kelley fired his pistol several times, trying to shoot the policeman. At the same time, O'Kelley repeatedly called Burnett foul names, saying he was going to kill him. Burnett called out for help repeatedly. O'Kelley did not hit Burnett with his gunfire, but Burnett did receive powder burns on one ear. Once out of ammunition, O'Kelley used his teeth to bite chunks out of both of the policeman's ears.

A friend of O'Kelley came to his aid and fired one shot at the policeman, but then lost his nerve and ran away. O'Kelley called out to him to come back, allegedly saying, "We will murder this fellow."

R. E. Chapin, witnessed the fight from the rear of the building on West Main Street and telephoned police headquarters. Chapin heard officer Burnett call out to several men passing by, "I am a police officer, help me!" One of the men replied, "We don't know whether you are a police officer or not."

It was then discovered just how close Burnett had come to death. There were two bullet holes in the back of his overcoat and the left hip pocket was torn by a bullet. Burnett's gloves were burned and his clothing was on fire by the time his friends reached his side.

An ambulance was called and O'Kelley's body taken to the morgue at Street and Harpers furniture store. His body had a bullet wound in his left leg just above the knee. The fatal shot entered his head just behind the left temple and exited behind the right ear.

O'Kelley's body remained at the morgue for about two weeks. A number of people identified the dead man as the killer of Robert Ford, including Otto Ewing. The warden of the Colorado State Penitentiary sent a description and photograph of O'Kelley, leaving no doubt of his identification.

On , , O'Kelley was interred at Fairlawn Cemetery in north . The casket was provided by the county at a cost to the taxpayers of $12.50.

Officer Joe Burnett continued with the , serving as a Captain and later as assistant Chief of Police.

Joe Burnett was then referred to as "The man who killed the man who killed Jesse James' murderer." Burnett died on July 20, 1917 of paralysis at St. Anthony's Hospital. Ironically, Burnett is buried in a marked grave in the same cemetery as the man he killed. His death led to the end of a line of continuous killers relating to, and starting with Jesse James.

* [http://www.findagrave.com/cgi-bin/fg.cgi?page=gr&GRid=10317 Findagrave.com] Note: Has much misinformation, such as O'Kelley never married a Younger and did not know the James brothers.
* [http://www.ericjames.org Official website for the Family of Jesse James]