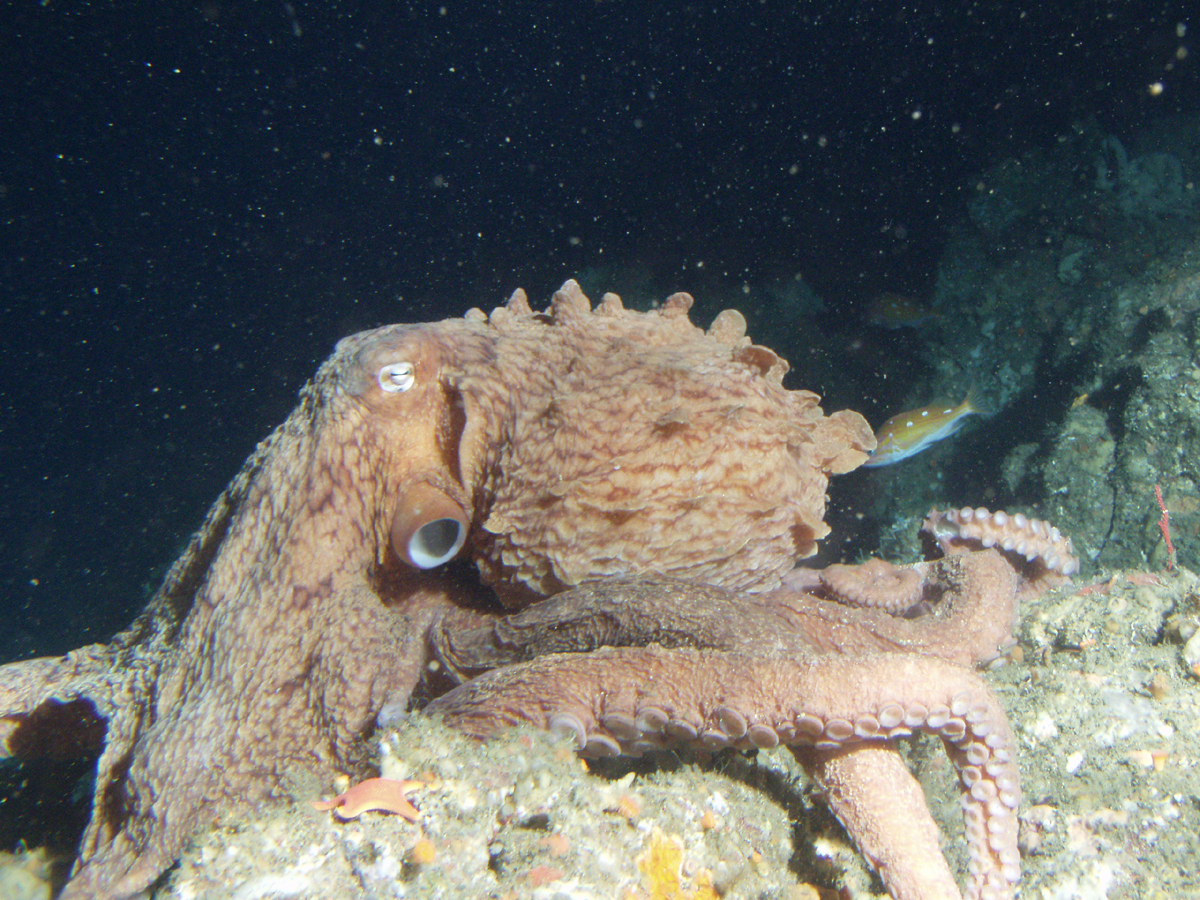 The North Pacific Giant Octopus ("Enteroctopus dofleini") is a large belonging to the genus "". It can be found in the coastal Pacific Northwest, usually around the depth of 65 meters (about 213 ft.). It can, however, live in much shallower or much deeper waters. It is arguably the largest species, based on a scientific record of a 71 kg (156.5 lb) individual weighed live. [Cosgrove, J.A. 1987. Aspects of the Natural History of "Octopus dofleini", the Giant Pacific Octopus. M.Sc. Thesis. Department of Biology, University of Victoria (Canada), 101 pp.] The alternative contender is the based on a 61 kg (134 lb) carcass estimated to have a live mass of 75 kg (165 lb). [O'Shea, S. 2004. The giant octopus "Haliphron atlanticus" (Mollusca : Octopoda) in New Zealand waters. "New Zealand Journal of Zoology" 31(1): 7-13.] [O'Shea, S. 2002. "Haliphron atlanticus" — a giant gelatinous octopus. "Biodiversity Update" 5: 1.] However, there are a number of questionable size records that would suggest "E. dofleini" is the largest of all octopus species by a considerable margin.

The North Pacific Giant Octopus, or the Giant Pacific Octopus, are distinguished from other species by their sheer size. Adults usually weigh around 15 kg (33 lb), with an arm span of up to 4.3 m (14 ft).

Giant Pacific Octopuses are considered extremely intelligent for invertebrates, capable of solving complex puzzles. Among other things, some species of octopus have been reported to unscrew jar lids to retrieve food and mimic the behaviors of other octopuses .Fact|date=January 2008

This species of octopus commonly preys upon shrimp, crabs, scallops, abalones, clams, and fish. It procures food with its suckers, which is then crushed with its tough "beaks" of chitin. They have also been observed catching sharks of 3-4 feet in length. [http://video.google.com/videoplay?docid=-7004909622962894202]

Marine mammals such as the , , and depend upon the North Pacific Giant Octopus as a source of food. The octopus is also commercially fished in the United States.

The North Pacific Giant Octopus is considered to be short-lived for an animal its size, with life spans that average only 3-5 years in the wild. To make up for its relatively short life span, the octopus is extremely prolific. It can lay up to 100,000 eggs which are intensively cared for by the females. Hatchlings are about the size of a grain of rice, and only a very few survive to adulthood.

During reproduction, the male octopus deposits a spermatophore (or sperm packet) more than 1 meter long. Large spermatophores are characteristic of octopuses in this genus.

Very little is known about the population of this solitary creature and the North Pacific Giant Octopus is not currently under the protection of CITES or the . However, this is an animal sensitive to water pollution and may depend upon conservation efforts for future survival.