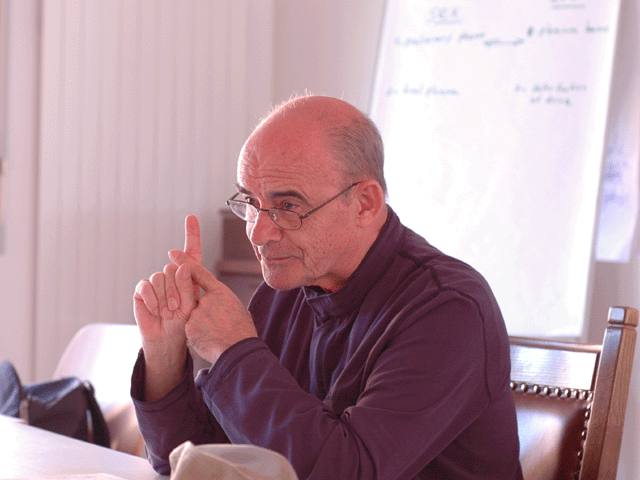 Jean-Luc Nancy graduated in philosophy in 1962 in . He taught for a short while in before becoming an assistant at the "Institut de Philosophie" in 1968. In 1973, he received his with a dissertation on Kant under the supervision of Paul Ricœur. Nancy was then promoted to "Maître de conférences" at the "Université des Sciences Humaines de Strasbourg". In the 1970s and 1980s, Nancy was a guest professor at universities all over the world, from the to the "Freie Universität" in . He has been invited as a cultural delegate of the French Ministry of External Affairs to speak in , Britain and the . In 1987, Nancy received his "Docteur d'état" from the "Université de Toulouse-Le-Mirail" under the supervision of and a jury including and Jacques Derrida. It was published as "L'expérience de la liberté" (1988).

In the late 1980s and early 1990s, Nancy suffered serious medical problems. He underwent a and his recovery was made more difficult by a long-term fight with cancer. He stopped teaching and quit participating in almost all of the committees with which he was engaged, but continued to write. Many of his best known texts were published during this time. An account of his experience, "L'intrus" ("The Intruder"), was published in 2000.

Nancy is Professor of Philosophy at the .

Filmmaker has made at least two movies inspired by Jean-Luc Nancy and his works. Many other artists have worked with Nancy as well, such as and Soun-gui Kim. Nancy has written about the filmmaker and featured prominently in the film "The Ister".

In 1980, Nancy and Lacoue-Labarthe organized a conference in Cerisy-la-Salle on Derrida and politics entitled "Les Fins de l'homme" ("The Ends of Man"). The conference solidified Derrida’s place at the forefront of contemporary philosophy, and was a place to begin an in-depth conversation between philosophy and contemporary politics. Further to their desire to rethink the political, Nancy and Lacoue-Labarthe set up in the same year the "Centre de Recherches Philosophiques sur la Politique" (Centre for Philosophical Research on the Political). The Centre was dedicated to pursuing philosophical rather than empirical approaches to political questions, and supported such speakers as and Jean-François Lyotard. By 1984, however, Nancy and Lacoue-Labarthe were dissatisfied with the direction work at the centre was taking, and it was closed down. [For more detail on the reasons for the closure, see Lacoue-Labarthe & Nancy, "Chers Amis": A Letter on the Closure of the Political," in Lacoue-Labarthe & Nancy, "Retreating the Political" (London & New York: Routledge, 1997), pp. 143–47.]

Nancy’s first book on the question of , "La Communauté désœuvrée" ("The Inoperative Community", 1982), is perhaps his best-known work. This text is an introduction to some of the main philosophical themes Nancy continued to work with. Nancy traces the influence of the notion of community to concepts of , , and the , and argues that it has dominated modern thought. Discarding popular notions, Nancy redefines community, asking what can it be if it is reduced neither to a collection of separate individuals, nor to a hypostasized communal substance, e.g., . He writes that our attempt to design according to pre-planned definitions frequently leads to social violence and , posing the social and political question of how to proceed with the development of society with this knowledge in mind. "La Communauté désœuvrée" means that community is not the result of a production, be it social, economic or even political (nationalist) production; it is not "une œuvre", a "work of art" ("œuvre d'art", but "art" is here understood in the sense of "").

"La communauté inavouable" ("The Unavowable Community", 1988), a short work by Maurice Blanchot, was a response to Nancy’s work on community (and inspired as well by Georges Bataille, whose work on is discussed in "La communauté désoeuvrée"). The dialogue between Nancy and Blanchot would continue until Blanchot's death.

Nancy's dissertation for his "Docteur d'etat" looked at the works of Kant, Schelling, Sartre and Heidegger, and concentrated on their treatment of the topic of freedom. It was published in 1988 as "L'Expérience de la Liberté" ("The Experience of Freedom"). Since then, Nancy has continued to concentrate on developing a reorientation of Heidegger’s work. Nancy treats freedom as a of the individual or collectivity, and looks for a "non-subjective" freedom which would attempt to think the or origin for every freedom. Nancy argues that it is necessary to think freedom in its finite being, because to think of it as the property of an infinite subject is to make any finite being a limit of freedom. The existence of the other is the necessary condition of freedom, rather than its limitation.

Nancy addresses the world in its contemporary global configuration in other writings on freedom, justice and sovereignty. In his 1993 book "Le sens du monde" ("The Sense of the World"), he asks what we mean by saying that we live in one world, and how our sense of the world is changed by saying that it is situated within the world, rather than above or apart from it. To Nancy, the world, or , is our ontological responsibility, which precedes political, judicial and moral responsibility. He describes our being in the world as an exposure to a naked existence, without the possibility of support by a fundamental metaphysical order or cause. Contemporary existence no longer has recourse to a divine framework, as was the case in feudal society where the meaning and course of life was predetermined. The of our naked existence as an ontological question is the main challenge of our existence in contemporary global society.

In his book "Être singulier pluriel" ("Being Singular Plural", 2000), Nancy tackles the question of how we can speak of a plurality of a "we" without making the "we" a singular identity. The premise of the title essay in this book is that there is no being without "being-with," that "I" does not come before "we" (i.e., "Dasein" does not precede "Mitsein") and that there is no existence without co-existence. In an extension from his thoughts on freedom, community, and the sense of the world, he imagines the "being-with" as a mutual exposure to one another that preserves the freedom of the "I", and thus a community that is not subject to an exterior or pre-existent definition.

The five essays that follow the title piece continue to develop Nancy’s philosophy through discussions of sovereignty, and , identity, the and . Nancy’s central concern in these essays remains the "being-with", which he uses to discuss issues of , politics and , looking at notions of "self" and "other" in current contexts.

Nancy has also written for art catalogues and international art journals, especially on contemporary art. He also writes poetry and for the theatre and has earned respect as an influential philosopher of art and culture. In his book "Les Muses" published in 1994 ("The Muses", 1996), he begins with an analysis of Hegel’s thesis on the death of art. Among the essays in "The Muses" is a piece on , originally a lecture given at the . In this essay, Nancy looks for a different conception of where painting is not a representation of the world, but a presentation of the world, of sense, or of existence. Nancy has published books on and , as well as texts on the problem of representation, on the statute of , on and , and on the work of , , and .

He has written extensively on film, including "The Evidence of Film," a short work on .

Nancy appears in the film "The Ister", based on Martin Heidegger's 1942 lectures on Friedrich Hölderlin's poem "Der Ister" (published as ""). The film focuses on the relation of politics, technology and myth.

* [http://www.iep.utm.edu/n/Nancy.htm Internet Encyclopedia of Philosophy entry] .
* [http://www.egs.edu/faculty/jeanlucnancy.html Faculty profile at the European Graduate School] , includes bibliography, quotations, and video clips.
* [http://www.littlemag.com/jul-aug01/nancy.html Between Story and Truth] , by Nancy.
* [http://www.lacan.com/lacinkXXX7.htm To the Exhausting Nude... On Jacques Damez] , by Nancy.
* [http://www.atopia.tk/index.php?option=com_content&task=view&id=41&Itemid=53&lang=en The real outside is "at the heart" of the inside] , 2007 interview with Nancy.
* [http://www.usc.edu/dept/comp-lit/tympanum/4/nancy.html The Technique of the Present] , lecture given by Nancy in January 1997 at the "Nouveau Musée" during the exposition of On Kawara's work.
* [http://web.archive.org/web/20030430044125/http://www.uwo.ca/modlang/ailc/old32/current/B~Nancy~patrick.htm Review of "The Sense of the World"] , by David Patrick.
* [http://jcrt.org/archives/06.3/kotsko.pdf Review of "La Déclosion: Déconstruction du christianisme, 1"] .
*fr icon [http://ciepfc.rhapsodyk.net/article.php3?id_article=70 Review of "Au ciel et sur la terre. Petite conférence sur « Dieu »"] , by Elie During.