The King Island Emu or Black Emu[2] (Dromaius novaehollandiae ater) is an extinct sub-species of emu which occurred on King Island between mainland Australia and Tasmania.[1] It is known from 19th century descriptions of live birds, as well as subfossil bones and one museum specimen. It is the smallest known Emu. 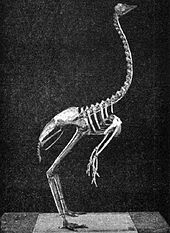 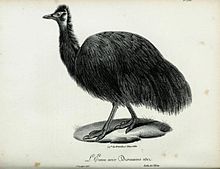 Illustration of the Paris specimen from 1834

The King Island Emu was first mentioned in January 1802 in exploration surveys of King Island, as part of Nicolas Baudin's expedition, which described ‘woods full’ of emu and other animals.[3] Soon after the emu went extinct, and it was not recognised as different from mainland emus at the time.[4][5]

In December 1802 François Péron, a French naturalist who was part of Baudin's expedition, visited the island and was the last person to record descriptions of the King Island Emu.[6] The little we know today about the King Island Emu stems from interviews Péron conducted with sealers.

There was long confusion regarding the taxonomic status and geographic origin of the King Island Emu, particularly with respect to their relationship to Kangaroo Island Emu, which were also transported to France as part of the same expedition. The expeditions logbooks failed to clearly state where and when dwarf emu individuals were collected. This led to both taxa being interpreted as a single taxon and that it originated from Kangaroo Island. More recent finds of sub-fossil material and subsequent studies on King and Kangaroo Island Emu, notably by Shane A. Parker in 1984, confirm their separate geographic origin and distinct morphology.[7]

Based on morphology it was long believed to be a distinct species of Dromaius, but a genetic study showed that it was conspecific with the emus of the Australian mainland, and was reclassified as a subspecies of Dromaius novaehollandiae. Its smaller size was due to insular dwarfism.[8]

It was much smaller than other emus, with only half the weight of the mainland birds. It was about 140 cm (55 in) tall and weighed 23 kg (51 lb). It reported to have had darker plumage, but this has come into question due to a genetic study not finding genes associated with melanism. The juveniles were grey, while the chicks were striped like other emus. They ate berries, grass and seaweed,[2] and they reportedly liked the shady area of lagoons and the shoreline.[9] Additional traits that supposedly distinguish thhis bird from the mainland Emu have previously been suggested to be the distal foramen of the tarsometatarsus, and the contour of the cranium. However, the distal foramen is known to be variable in the modern Emu showing particular diversity between juvenile and adult forms and is therefore taxonomically insignificant.[10] The same is true of the contour of the cranium, which is more dome-shaped in the King Island Emu but is in fact also seen in juvenile modern Emu.

Two or three individuals were brought back to France in 1804 and were kept in captivity in the Jardin des Plantes, the last one dying in 1822. One of these last birds remains today as the sole surviving skin in the Muséum national d'Histoire naturelle.[11] Soon after this bird was discovered, English sealers settled on the island because of the abundance of elephant seals. At the time of the death of the last captive bird, the species was long gone from King Island, having been killed off by hunting and, apparently, fires started by visiting sailors. The interviews with the sealers suggested why this bird did not survive for long. Péron described how dogs were purpose-trained to hunt down emu and a variety of cooking recipes are mentioned; one of the sealers even claimed to have killed no fewer than 300 emu. Today we know that several King Island Emu specimens were sent to France as part of Baudin's expedition[12][13], several of which survive as specimens in museums throughout Europe today.