The Old Colony Lines are branches of the MBTA Commuter Rail system, connecting downtown Boston, Massachusetts with the South Shore and cranberry-farming country to the south and southeast. The Middleborough/Lakeville Line winds south through Holbrook, Brockton, Bridgewater, Lakeville and Middleborough and the Plymouth/Kingston Line heads southeast from Braintree, roughly following Route 3 toward Weymouth, Abington, Whitman, Hanson, Halifax, Kingston and Plymouth. The Greenbush Line, part of the original Old Colony system but restored separately, heads east from north of Braintree station towards Hingham, Cohasset, and Scituate. In fiscal year 2010, the Middleborough/Lakeville line averaged 9,930 riders per weekday and the Plymouth/Kingston Line 9,238 riders for a combined daily ridership of 19,168.[1] 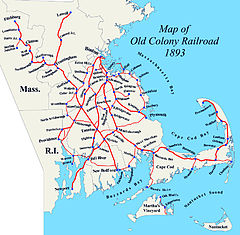 Historically, train service extended beyond the current terminus of the three branches. Greenbush service continued on a now-abandoned right-of-way to Kingston, where it joined the Plymouth line. The Plymouth line extended into downtown Plymouth, and a branch connected to Middleborough. Trains continued southeast from Middleboro to four different termini on Cape Cod: Woods Hole, Hyannis, Chatham and Provincetown. Another major branch continued southwest to New Bedford, and another to Newport via Fall River

A number of minor branches also extended off the main lines. These included branches to Hull, East Bridgewater, West Bridgewater, North Hanover, and Fairhaven. None of those branches is currently operational.

The Old Colony under the New Haven

Passenger service along the Old Colony Railroad was discontinued in 1959. Despite high ridership, this line had been a source of problems for the New Haven Railroad, which leased the system. In 1935, the bankrupt New Haven attempted to default on its lease and return ownership of the line to the Old Colony stockholders, however, this drove the Old Colony, which had not run trains in over thirty years, to bankruptcy in one day and the New Haven was forced to run the trains by court order, with a provision that if losses exceeded a certain amount they could abandon the line. The Old Colony Division enjoyed a brief renaissance in the early 1950s under the pro-commuter term of President Frederick C. Dumaine, Jr., however this was not to last. The New Haven's accountants used somewhat dubious practices to shift a greater amount of debt to the Old Colony Division, and the railroad announced that all passenger service would end in 1958. An emergency subsidy was approved by the Commonwealth of Massachusetts for another year, and service finally ended in 1959 with the opening of the Southeast Expressway, which runs alongside the Old Colony right-of-way in many sections.

As congestion and pollution became issues on the Expressway, projects were undertaken to revive service on these railways. In 1971, the South Shore Branch of the Red Line opened to Quincy Center, and in 1980 it was extended to Braintree. The line, with state-of-the-art park-and-ride stations, proved an instant success, leading proposals to restore commuter rail service past Braintree to gain strength.

In 1997, the Middleborough and Plymouth lines were reopened with the aim of relieving automobile traffic within the region. The first trains ran on September 26th, 1997, with full service on the 29th.[2]

The third leg of the project, the Greenbush Line, was planned to reopen at the same time. However, this line faced a number of different challenges. Unlike the other two, the line had been entirely abandoned by the 1970s, without even freight service running, so the right-of-way had to be completely rebuilt. In addition, the line had many more grade crossings than the other two, and some residents voiced concerns about the noise and disruption caused by the train running on the old right-of-way through downtown Hingham. After a number of lawsuits, the MBTA and Hingham came to an agreement to build a tunnel underneath the downtown area, which allowed the project to again progress. Revenue service began on October 31, 2007.

In May 2010, the MBTA announced a plan to temporarily stop all weekend service and to replace non-peak weekday service with buses. The shutdowns are for the purposes of replacing defective concrete ties, which have begun failing far earlier than expected, with wooden ones.[3] Tie replacement started in March 2011 and was substantially complete by September, although the full project - which includes grade crossing and bridge work - is expected to take until the summer of 2012.[4]