In Classical Latin it was a general noun referring to any divine figure. In Late Latin, it came to be used mostly of the Christian God. It is inherited directly in the Romance languages, as French dieu, Spanish dios, Portuguese deus, Italian dio, etc.

In ancient Sanskrit, the word used for 'God' or a deity is Dev/Deva/Devta/देव/देवता which also means "[He/She] who gives or provides". [1] 'Dev' is a very commonly used word and also can be used for anything Divine or of God. [2] Many etymologists believe that the Sanskrit word 'Dev' is the root of Deus.[3]

The word "Deus," through "Dei," is the root of deism, pandeism, panendeism, and polydeism, ironically all of which are theories in which any divine figure is absent from intervening in human affairs. This curious circumstance originates from the use of the word "deism" in the 17th and 18th centuries as a contrast to the prevailing "theism", belief in an actively intervening God:

The new religion of reason would be known as Deism. It had no time for the imaginative disciplines of mysticism and mythology. It turned its back on the myth of revelation and on such traditional "mysteries" as the Trinity, which had for so long held people in the thrall of superstition. Instead it declared allegiance to the impersonal "Deus".[4]

Followers of these theories, and occasionally followers of pantheism, may sometimes refer to God as "Deus" or "the Deus" to make clear that the entity being discussed is not a theistic "God". Arthur C. Clarke picks up this usage in his novel 3001: The Final Odyssey. William Blake said of the Deists that they worship "the Deus of the Heathen, The God of This World, & the Goddess Nature, Mystery, Babylon the Great, The Druid Dragon & hidden Harlot".[5]

In Cartesian philosophy, the phrase deus deceptor is sometimes used to discuss the possibility of an evil God that seeks to deceive us. This character is related to a skeptical argument as to how much we can really know if an evil demon were attempting to thwart our knowledge. Another is the deus otiosus ("idle god"), a theological concept used to describe the belief in a creator god who largely retires from the world and is no longer involved in its daily operation. A similar concept is that of the deus absconditus ("hidden god") of Thomas Aquinas. Both refer to a deity whose existence is not readily knowable by humans through either contemplation or examination of divine actions. The concept of deus otiosus often suggests a god who has grown weary from involvement in this world and who has been replaced by younger, more active gods, whereas deus absconditus suggests a god who has consciously left this world to hide elsewhere. 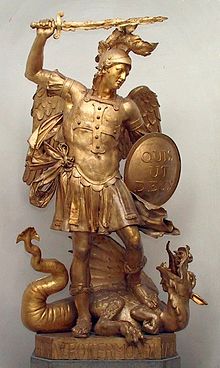 Statue of Archangel Michael slaying Satan represented as a dragon. Quis ut Deus? ("Who is like God?") is inscribed on his shield.

Nobiscum deus ("God with us") was a battle cry of the late Roman Empire and of the Byzantine Empire. The name Amadeus translates to "for love of God". The genitive/dative dei occurs in such phrases as Roman Catholic organization Opus Dei (work of God), Agnus Dei (Lamb of God) and Dei Gratia (By the Grace of God).