Pyruvate dehydrogenase complex (PDC) is a complex of three enzymes that transform pyruvate into acetyl-CoA by a process called pyruvate decarboxylation. Acetyl-CoA may then be used in the citric acid cycle to carry out cellular respiration, and this complex links the glycolysis metabolic pathway to the citric acid cycle. Pyruvate decarboxylation is also known as the "pyruvate dehydrogenase reaction" because it also involves the oxidation of pyruvate.

The reaction catalysed by pyruvate dehydrogenase complex is: 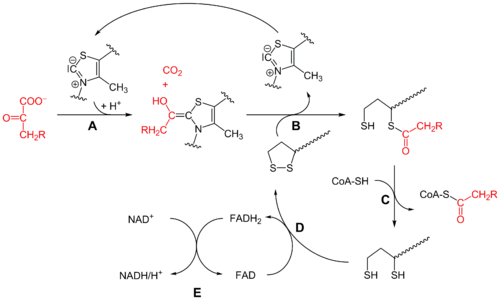 Initially, pyruvate and thiamine pyrophosphate (TPP or vitamin B1) are bound by Pyruvate dehydrogenase subunits. The thiazolium ring of TPP is in a zwitterionic form, and the anionic C2 carbon performs a nucleophilic attack on the C2 (ketone) carbonyl of pyruvate. The resulting hemithioacetal undergoes decarboxylation to produce an acyl anion equivalent (see cyanohydrin or aldehyde-dithiane umpolung chemistry, as well as benzoin condensation). This anion attacks S1 of an oxidized lipoate species that is attached to a lysine residue. In a ring-opening SN2-like mechanism, S2 is displaced as a sulfide or sulfhydryl moiety. Subsequent collapse of the tetrahedral hemithioacetal ejects thiazole, releasing the TPP cofactor and generating a thioacetate on S1 of lipoate. The E1-catalyzed process is the rate-limiting step of the whole pyruvate dehydrogenase complex.

At this point, the lipoate-thioester functionality is translocated into the dihydrolipoyl transacetylase (E2) active site, where a transacylation reaction transfers the acetyl from the "swinging arm" of lipoyl to the thiol of coenzyme A. This produces acetyl-CoA, which is released from the enzyme complex and subsequently enters the citric acid cycle. E2 can also be known as lipoamide reductase-transacetylase.

The dihydrolipoate, still bound to a lysine residue of the complex, then migrates to the dihydrolipoyl dehydrogenase (E3) active site where it undergoes a flavin-mediated oxidation, identical in chemistry to disulfide isomerase. First, FAD oxidizes dihydrolipoate back to its lipoate resting state, producing FADH2. Then, a NAD+ cofactor oxidizes FADH2 back to its FAD resting state, producing NADH.

Pyruvate dehydrogenase is inhibited when one or more of the three following ratios are increased: ATP/ADP, NADH/NAD+ and acetyl-CoA/CoA.

Products of the reaction act as allosteric inhibitors of the PDC, because they activate PDK. Substrates in turn inhibit PDK, and thus, reactivating PDC.

During starvation, PDK increases in amount in most tissues, including skeletal muscle, via increased gene transcription. Under the same conditions, the amount of PDP decreases. The resulting inhibition of PDC prevents muscle and other tissues from catabolizing glucose and gluconeogenesis precursors. Metabolism shifts toward fat utilization, while muscle protein breakdown to supply gluconeogenesis precursors is minimized, and available glucose is spared for use by the brain.

Calcium ion has a role in regulation of PDC in muscle tissue, because it activates PDP, stimulating glycolysis on its release into the cytosol - during muscle contraction.

In prokaryotes, which have no mitochondria, this reaction is either carried out in the cytosol, or not at all.

PDC is a large complex composed of multiple copies of 3 or 4 subunits depending on species.

In Gram-negative bacteria, e.g. Escherichia coli, PDC consists of a central cubic core made up from 24 molecules of dihydrolipoyl transacetylase (E2).

Eukaryotes also contain 12 copies of an additional core protein, E3 binding protein (E3BP). The exact location of E3BP is not completely clear. Cryo-electron microscopy has established that E3BP binds to each of the icosahedral faces in yeast.[3] However, it has been suggested that it replaces an equivalent number of E2 molecules in the bovine PDC core.

Up to 60 E1 or E3 molecules can associate with the E2 core from Gram-positive bacteria - binding is mutually exclusive. In eukaryotes E1 is specifically bound by E2, while E3 associates with E3BP. It is thought that up to 30 E1 and 6 E3 enzymes are present, although the exact number of molecules can vary in vivo and often reflects the metabolic requirements of the tissue in question.