See also: History of the telescope

Newton’s idea for a reflecting telescope was not a new one. Galileo Galilei and Giovanni Francesco Sagredo had discussed using a mirror as the image forming objective soon after the invention of the refracting telescope,[3] and others, such as Niccolò Zucchi, claimed to have experimented with the idea as far back as 1616.[4] Newton may even have read James Gregory's 1663 book Optica Promota which described reflecting telescope designs using parabolic mirrors[5] (a telescope Gregory had been trying unsuccessfully to build).[6] 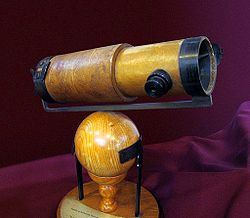 A replica of Newton's second reflecting telescope that he presented to the Royal Society in 1672.[7]

Newton built his reflecting telescope because he suspected that it could prove his theory that white light is composed of a spectrum of colors.[8] Color distortion (chromatic aberration) was the primary fault of refracting telescopes of Newton's day, and there were many theories as to what caused it. During the mid 1660s with his work on the theory of colour, Newton came to the conclusion that this defect was caused by the lens of the refracting telescope behaving the same as prisms he was experimenting with, breaking white light into a rainbow of colors around bright astronomical objects.[9][10] If this was true, then chromatic aberration could be eliminated by building a telescope that did not use a lens – a reflecting telescope.

In late 1668 Isaac Newton built his first reflecting telescope. He chose an alloy (speculum metal) of tin and copper as the most suitable material for his objective mirror. He later devised means for shaping and grinding the mirror and may have been the first to use a pitch lap[11] to polish the optical surface. He chose a spherical shape for his mirror instead of a parabola to simplify construction; even though it would introduce spherical aberration, it would still correct chromatic aberration. He added to his reflector what is the hallmark of the design of a Newtonian telescope, namely a secondary diagonally mounted mirror near the primary mirror's focus to reflect the image at a 90° angle to an eyepiece mounted on the side of the telescope. This unique addition allowed the image to be viewed with minimal obstruction of the objective mirror. He also made the tube, mount, and fittings. Newton's first version had a mirror diameter of 1.3 inches and a focal ratio of f/5.[12] He found that the telescope did work without color distortion and that he could see the four Galilean moons of Jupiter and the crescent phase of the planet Venus with it. Newton's friend Isaac Barrow showed a second telescope to a small group from the Royal Society of London at the end of 1671. They were so impressed with it that they demonstrated it to Charles II in January of 1672. Newton was admitted as a fellow of the society in the same year.

Like Gregory before him, Newton found it hard to construct an effective reflector. It was difficult to grind the speculum metal to a regular curvature. The surface also tarnished rapidly; the consequent low reflectivity of the mirror and also its small size meant that the view through the telescope was very dim compared to contemporary refractors. Because of these difficulties in construction, the Newtonian reflecting telescope was initially not widely adopted. It wasn't until 50 years later in 1721 that John Hadley showed a much-improved model to the Royal Society.[13] Hadley had solved many of the problems of making a parabolic mirror. His Newtonian with a mirror diameter of 6 inches (~15 cm) compared favorably with the large aerial refracting telescopes of the day.[14] The aperture of reflecting telescopes would subsequently grow rapidly, with designs doubling in aperture about every 50 years.[15]

Advantages of the Newtonian design

Disadvantages of the Newtonian design

A large Newtonian reflector from 1873 with structure to access the eyepiece.