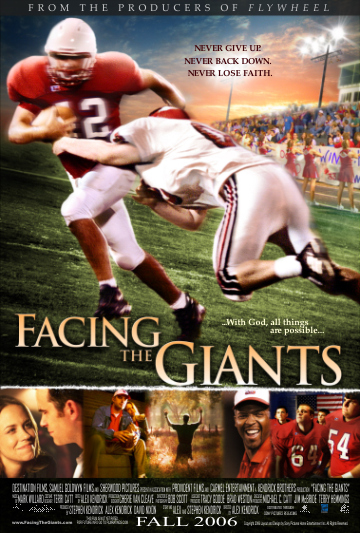 "Facing the Giants" is a 2006 American directed by and starring . The cast was made up of volunteers from a local church. The actors included Shannon Fields, James Blackwell, Bailey Cave, and Tracy Goode.

The plot follows a classic story about with an evangelical Christian worldview. This movie was shot in .

The film made its debut on September 21st, 2008 on . [cite web |url=http://www.ceganmo.com/2008/09/making-of-fireproof-facing-giants-and.html |title=The Making of Fireproof, Facing the Giants, and Flywheel this week on TBN |publisher=CEGAnMo.com |accessdate=2008-09-20 ]

Coach Grant Taylor at Shiloh Christian Academy has never had a winning football season. His car breaks down frequently, his house is falling down around him, and he and his wife are unable to have children. When he overhears school parents plotting to have him fired, he reaches a crisis point and prays. The turning point for Coach Taylor is shortly after an intensive time of prayer. An older man who walks the halls of the school praying for the students shows up unexpectedly in the coach's office with a message of encouragement. The timing of that message overcomes the Coach's reluctance to change focus.

As a result, Shiloh's 0-3 season took a 180-degree turn of a sudden: they won their next 7 games, and found themselves in the playoffs. They lost a close game, and thought their season was over. But the next day, they found out that their opponent had been disqualified for playing overage players.

The Eagles win their next two games to advance to the state championship against the defending three time champion Giants. Unlike the shallow bench that Shiloh is stuck with, the Giants boasts almost 3 times as many players. With bigger, faster players, and the ability to substitute, the Giants had what seemed an insurmountable advantage.

A sub-plot involves a short weak boy, David Childers (Bailey Cave), who hopes to play despite the fact his school only offers football. His paraplegic father encourages him to play football only as a kicker, and David is at first reluctant. David's best kick is barely 35 yards. When the team's regular kicker is injured by a broken collar bone during the state championship game, David is called upon to kick a field goal 51 yards, and with two seconds left in the game - into the wind, to boot. His father (Steve Williams) successfully stands and holds onto a fence through monumental physical effort, and says a small prayer. Just before the kick takes place, the wind miraculously shifts direction. With the wind at his back, David threw all of himself into the kick, falls flat on his back - and connects with the winning three points.

Another sub-plot involves a rebellious but talented transfer student, Matt Prater (James Blackwell). His father hopes for a football scholarship for his son, but the son constantly disrespects and disregards his father. After the entire school experiences a revival, and Matt gives his life to Christ, he feels the need to address his father during the school day. Coach Taylor provides the needed ride to Matt's father's office, and Matt apologizes to his father for disrespecting his authority.

, head football coach at the University of Georgia, makes a cameo. As presented in the film, Coach Taylor played college football under Richt. As Coach Taylor was at SCA for six years, it would have been impossible for him to play college football at the University of Georgia after 2000, when Coach Richt became head coach. From 1990 to 2000 Mark Richt was the offensive coordinator for , so it is presumable that Coach Taylor played football under him at FSU. Also, a news report from features then-sports anchor Kevin McDermond in a brief cameo.

The movie was shot on high definition digital video tape (using the Panasonic Varicam) and transferred to film.

Third Day's distributor is , which is associated with Provident Films, and Samuel Goldwyn Pictures. The latter eventually distributed the film nationally. A routine request for permission led to the national release of the film.

In its first weekend, the film opened on 441 screens nationwide in the United States.

The film only earned a 9% approval rating at with 3 positive reviews out of 23 reviews counted and a 38/100 score at .

Counter to the foregoing, "the script unfortunately devolves into cliché and cant, other aspects of the movie are quite good &mdash; so good, in fact, that "Facing the Giants" shames the efforts of a lot of better-financed moviemakers."

In May 2006, the producers of "Facing the Giants" received notice from the () that the film would be receiving a "Parental Guidance Suggested" rating, or "PG" rating.

According to the film's producers, they were originally told the motion picture received a "PG" rating because of its strong religious themes and because it elevated one religion over another. The MPAA later countered that "Facing the Giants" contains football violence and also deals with the mature topics of infertility and depression, thus warranting the higher rating and initially denied that religious themes were an issue. The Kendrick brothers expected the "PG" rating because of the movie's mature themes and did not appeal the board's rating.

The MPAA, which oversees the rating board, received more than 15,000 email messages within a week because of their decision and the media attention it drew, ten times more than they had ever received for any previous film.