Nomenclature of Territorial Units for Statistics

For each EU member country, a hierarchy of three NUTS levels is established by Eurostat; the subdivisions in some levels do not necessarily correspond to administrative divisions within the country. A NUTS code begins with a two-letter code referencing the country, which is identical to the ISO 3166-1 alpha-2 code (except UK instead of GB for the United Kingdom). The subdivision of the country is then referred to with one number. A second or third subdivision level is referred to with another number each. Each numbering starts with 1, as 0 is used for the upper level. In case the subdivision has more than nine entities, capital letters are used to continue the numbering. A similar statistical system is defined for the candidate countries and members of the European Free Trade Association, but they are not technically part of NUTS governed by the regulations.

In addition to the full three levels for the European Union countries, all other countries have a NUTS code with a two-letter code for a continent and two numbers for the country, and for the USA, Canada and Australia the states, provinces, and territories are numbered separately. There are some anomalies: for example, Gibraltar is listed as being outside the EU with the code EO21; while French Guiana is listed twice, once in France as FR930 and once in South America as AS13. NUTS is thus in some extent similar to the ISO 3166-2 standard, as well as the FIPS 10-4 standard of the United States. 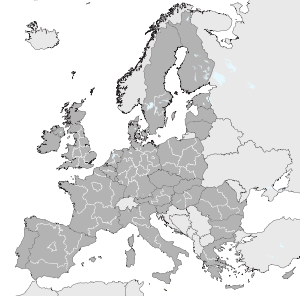 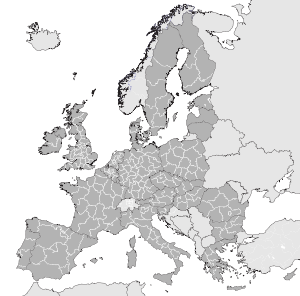 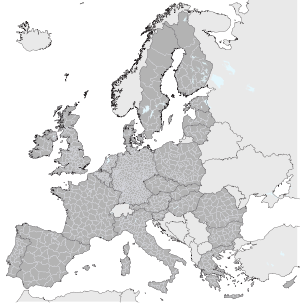 There are three levels of NUTS defined, with two levels of local administrative units (LAUs) below. These were called NUTS levels 4 and 5 until July 2003, but were officially abolished by regulation, although they are sometimes still described as such. Note that not all countries have every level of division, depending on their size. One of the most extreme cases is Luxembourg, which has only LAUs; the three NUTS divisions each correspond to the entire country itself.

The NUTS-region are based on the existing national administrative subdivisions. In countries where only one or two regional subdivisions exist, or where the size of existing subdivisions is too small, a second and/or third level is created. This may be on the first level (ex. France, Italy, Greece, and Spain), on the second (ex. Germany) and/or third level (ex. Belgium).[12] In smaller countries, where the entire country would be placed on the NUTS 2 or even NUTS 3 level (ex. Luxembourg, Cyprus, Ireland), levels 1, 2 and/or 3 are identical to the level above and/or to the entire country.

The thresholds in the table below are used as guidelines for establishing the regions, but they are not applied rigidly. For example, both Cornwall, population 531,600 in 2007, and Lombardy, with a population of nearly ten million, are NUTS 2 regions.