Constitution of the People's Republic of Poland

Constitution of the People's Republic of Poland

The constitution was amended 24 times, with the most known amendment being that of 10 February 1976. This amendment declared that Poland was a socialist country, the PZPR party was the leading force in the building of socialism and Poland was an eternal friend of the Soviet Union. This amendment caused the protest resulting in the Letter of 59.

For more details on this topic, see Sejm.

The Sejm of the People's Republic of Poland started with 425 members, and at first the number was declared to represent 1 deputy per 60,000 citizens. However, as the population grew in 1960, that connection was dropped from the constitution stabilizing the Sejm at 460 deputies. An article in the constitution stated that deputies were responsible to the people and could be recalled by the people, although this article was never used. Instead of the Five-point electoral law, a four-point version was used (not proportional).

Legislation was passed with majority voting. The Sejm would vote on the budget as well as on national plans. The Sejm deliberated in sessions, and the sessions were called by the State Council.

The Sejm would also choose a 'Prezydium' body from its members, with the marshal of the Sejm always being a member of the Zjednoczone Stronnictwo Ludowe party. During its first session the Sejm would also nominate the Prime Minister together with other ministers (Council of Ministers) and members of the State Council. The Sejm would also choose many other government officials, including the head of The Supreme Chamber of Control (Najwyższa Izba Kotroli, NIK), members of The State Tribunal (Trybunał Stanu) and Constitutional Tribunal (Trybunał Konstytucjny) as well as the Ombudsman (Rzecznik Praw Obywatelskich) (the latter three institutions were created in the 1980s).

Note that the Senate of Poland was abolished by the Polish people's referendum, 1946 and the Sejm became the sole legislative body in Poland. 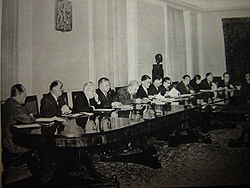 A meeting of the Council of State during the 1960s

Executive power was held by the Council of Ministers and State Council. The State Council was elected on the first session of the sejm for a four-year period, and could be composed of both deputies and non-deputies; they were usually chosen from the 'party key' (with party being the Polish United Workers' Party) although occasionally it contained non-party members. The council acted as the Head of State (in practice usually through the President of the State Council) and thus represented the People's Republic of Poland in foreign relations and the ratification of international treaties; the Council also had the vote in matters related to the military. It granted citizenship and could invoke pardon. The council had no legislative initiative, but could issue decrees. However, they had to be confirmed by the Sejm in its next session. The council also defined the judicial interpretation.

Note that the State Council replaced the previous Polish head of the state, president of Poland (the last one being Bolesław Bierut).

The Supreme Court was the overseer of all other courts, which were divided into regional, voivodeship and particular (administrative and military). In 1980, the Supreme Administrative Court was introduced, and in 1982, the State Tribunal (which also existed in the Second Polish Republic), Constitutional Tribunal and the Ombudsman were introduced.

During its 45 years of service, the Constitution of the People's Republic of Poland was subject to many changes, with its text amended 24 times.

The most known amendment was that of 10 February 1976. This amendment declared that Poland was a socialist country, the PZPR party was the leading force in the building of socialism and Poland was an eternal friend of the Soviet Union. This amendment caused the protest resulting in the Letter of 59.

Some of the biggest changes which took place with the beginning of the fall of communism in 1989 were:

This article incorporates information from the revision as of 23 June 2006 of the equivalent article on the Polish Wikipedia.