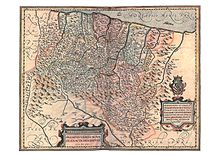 The Duchy of Urbino was a sovereign state of northern Italy.

The first lords of Urbino were the Montefeltro, who obtained the title of counts from Emperor Frederick II in 1213. The first Duke was Oddantonio, who received the title from Pope Eugene IV in 1443. The duchy's territories occupied approximately the northern part of the modern region of Marche: they were bordered by the Adriatic Sea at east, the Republic of Florence at west and by the Papal States southwards.

In 1523 the capital was moved to Pesaro. After the short rule by Cesare Borgia in 1502–08, the dukedom went to the Della Rovere papal family, who held it until 1625, when Pope Urban VIII annexed to the Papal States as Legazione del Ducato di Urbino (later Legazione di Urbino).