Her Majesty's Coastguard is the service of the government of the United Kingdom concerned with co-ordinating air-sea rescue.

HM Coastguard is a section of the Maritime and Coastguard Agency responsible for the initiation and co-ordination of all civilian maritime Search and Rescue (SAR) within the UK Maritime Search and Rescue Region. This includes the mobilisation, organisation and tasking of adequate resources to respond to persons either in distress at sea, or to persons at risk of injury or death on the cliffs or shoreline of the United Kingdom. The chief executive of the Maritime and Coastguard Agency is Sir Alan Massey. Operational control of the service is the responsibility of the Chief Coastguard. 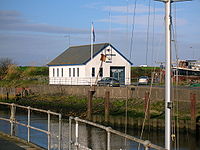 In 1809 the Preventative Water Guard was established and can be regarded as the immediate ancestor of HM Coastguard. Its primary objective was to prevent smuggling, but it was also responsible for giving assistance to shipwrecks.

Each Water Guard station was issued with Manby's Mortar which was invented by Captain George William Manby. The mortar fired a shot with a line attached from the shore to the wrecked ship and was used for many years.

In 1821 a committee of enquiry recommended that responsibility for the Preventative Water Guard be transferred to the Board of Customs. The Treasury agreed and in a Minute dated 15 January 1822, directed that the preventative services, which consisted of the Preventative Water Guard, cruisers, and Riding Officers should be placed under the authority of the Board of Customs and in future should be named the Coast Guard.

In 1829 the first Coast Guard instructions were published and dealt with discipline and directions for carrying out preventative duties. They also stipulated that when a wreck took place, the Coast Guard was responsible for taking all possible action to save lives, to take charge of the vessel and to protect property.[1]

The Coastguard has a museum at Sewerby Hall near Bridlington to commemorate the 200 year history of the agency. HRH The Prince of Wales is an honorary Commodore of HM Coastguard.

NB: Assistant District Officers are all full-time, but some work as Coastguard 'Watch Managers', whilst others supervise the volunteer coast rescue service as 'Sector Managers'. 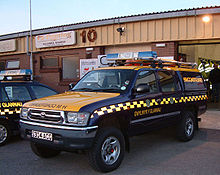 The Maritime and Coastguard Agency (MCA) is an executive agency responsible throughout the UK for implementing the Government’s maritime safety policy. That includes co-ordinating search and rescue at sea through Her Majesty’s Coastguard, checking that ships meet UK and international safety rules and preventing coastal pollution.

Typical emergencies to which the Coastguard is summoned include: 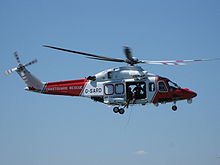 Ships in distress or the public reporting an accident should make a Mayday call on MF radio, marine VHF radio channel 16, or by dialling 999 or 112 on a telephone. The Coastguard continuously monitors all the maritime distress frequencies (including the international VHF distress frequency 156.8 MHz) and has access to Satellite based monitoring systems. The Coastguard then co-ordinates the emergency response. This normally involves requesting the launch of a local RNLI lifeboat (the RNLI being an independent organization), launching an independent lifeboat, deploying a local Coastguard unit, or a search and rescue helicopter. On occasions, the Coastguard has called on warships of the Royal Navy to assist with incidents. Depending on the circumstances of each incident, the Coastguard may also arrange for other emergency services to be deployed to the incident or to meet other units returning from the incident, for example in the case of a medical emergency. A full list of 'Declared Assets' is below:

Declared Assets are Facilities that have given a declaration to the Coastguard of a certain level of availability or training. Other assets that may be tasked to assist with any incident include; Mountain Rescue, Military Police, The Fire and Rescue Service and Volunteer Lifeguards. In addition, various 'Memorandums of Understanding' exist between the Coastguard and other Emergency Services to establish priority when working in each others areas. For example, police officers needing to carry out a search of the shoreline.

HM Coastguard operates out of bases or Maritime Rescue Co-ordination Centres which are divided into three group areas: [2]

Wales and West of England Region

Until 2001 stations were also operated in Tynemouth, Oban and Pentland.

The MCA operates various Pacific 32 rigid-hulled inflatable boats (RHIBs). From 1993 through 2011 the MCA chartered the United Kingdom's emergency towing vessel fleet from Klyne Tugs of Lowestoft, the Anglian Prince, Anglian Sovereign, Anglian Monarch and Anglian Princess. The MCA also charters the UK's Emergency tow vessel fleet, set up in 1993, but to be disbanded in September 2011.[3][4][5]