Ding-Dong! The Witch Is Dead

Ding-Dong! The Witch Is Dead 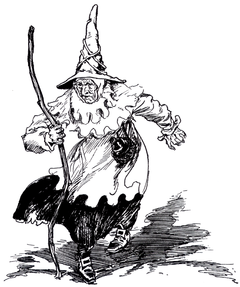 The Wicked Witch of the East as pictured in The Tin Woodman of Oz by L. Frank Baum

"Ding-Dong! The Witch Is Dead" is the centrepiece of several individual songs in an extended set-piece performed by the Munchkins, Glinda (Billie Burke) and Dorothy Gale (Judy Garland) in the 1939 film The Wizard of Oz. It was composed by Harold Arlen, with the lyrics written by E.Y. Harburg.

The group of songs celebrate the death of the Wicked Witch of the East after Dorothy "dropped a house on her", though actually this was caused by the tornado.

The sequence starts with Glinda encouraging the fearful Munchkins to "Come Out, Come Out, Wherever You Are" and meet Dorothy, who "fell from a star" named Kansas, so that "a miracle occurred."

Dorothy begins singing, modestly explaining through descriptive phrasing that it "It Really Was No Miracle"; it was the wind that brought the apparent miracle. The Munchkins soon join in and sing joyfully, perhaps not really understanding how she got there, but happy at the result.

Like several of the songs in the film's track, this one makes extensive use of rhyming wordplay, containing as many Hays Office-approved words rhyming with "witch" as the composers could think of: "itch", "which", "sitch"-uation, etc.

After a short interval in which two Munchkins present a bouquet to Dorothy, Glinda tells the Munchkins to spread the news that "the wicked old witch at last is dead!"

The Munchkins then sing the march-style number "Ding-Dong! The Witch Is Dead." After its one verse, there is another interruption, as the city officials need to determine if the witch is "undeniably and reliably dead." The coroner (Meinhardt Raabe) avers that she is, and the mayor reiterates Glinda's advice to the Munchkins to spread the news. The Munchkins oblige, and sing "Ding Dong the Witch Is Dead" again.

As the Munchkin soldiers march, looking vaguely like toys, some trumpeters issue a fanfare very similar to the fanfare at the beginning of the "March of the Toys" from Babes in Toyland. This has a notable though perhaps unintended subtlety. In 1903, the operetta had been written to compete with an early and successful Broadway rendition of The Wizard of Oz. In addition, in 1934, there had been a film version of Babes in Toyland, which was presumably still recent in the memories of the audience.

In the next interval, three Munchkin girls in ballet outfits and dancing en pointe sing "We Represent the Lullaby League," and welcome Dorothy to Munchkinland. Immediately after, three tough-looking Munchkin boys sing "We Represent the Lollipop Guild," actually the same tune as "Lullaby League," and they similarly welcome Dorothy to Munchkinland, the center Munchkin (Jerry Maren) giving her a large round all-day sucker. The boys fade back into the crowd as they all come forward and begin singing and dancing "We Welcome You to Munchkinland."

The Munchkins sing and dance merrily, with "Tra-la-la-la-la-la-las," until the Wicked Witch of the West (Margaret Hamilton), the other witch's sister, bursts onto the scene in fire and brimstone, putting a sudden stop to the Munchkins' revelry, as her own well-known, sinister-sounding instrumental theme plays on the track.

There was to have been a reprise of the song, beginning "Hail Hail the Witch Is Dead", sung by the leader of the Winkies (the witch's guards) after the Wicked Witch of the West had been killed and the spell over them was broken, and the lead Winkie had given Dorothy the witch's broomstick. It was to be continued by the townspeople of the Emerald City, who would sing it in a medley along with a reprise of "The Merry Old Land Of Oz".

This song and its scenes were cut from the film, which instead jumps directly from the witch's castle (minus the singing Winkie) to the Wizard's throne room. Parts of the song's recording survived and were included in the Deluxe CD soundtrack. The film footage of the celebration is lost, with the exception of a short clip that was actually in the film's original theatrical trailer, though it had been cut from the film.

Nearly all of the Munchkin voices were dubbed in by uncredited voice actors, who sang in their normal voices at a specific tempo, and the recordings were sped up to create the unique Munchkin "voices". The Deluxe CD includes the actual voices of the three "Lollipop Guild" on-screen performers for contrast. According to the CD liner notes, the uncredited voice actors for certain segments were:

Bletcher and Colvig had previously performed voice work notably in Three Little Pigs, and would go on to do a significant amount of voice work for the Warner and Disney cartoon studios. Bletcher himself was a short man, at 5 feet 2 inches, though notably taller than the Munchkins he voiced.

In The Goon Show it was often used as the closing theme tune, and was played live onstage by the Wally Stott Orchestra.

Its composer Harold Arlen recorded a duet of it with Barbra Streisand for his 1966 Columbia Records album, Harold Sings Arlen (with a Friend)[1] Columbia included the duet on Streisand's 2002 CD, Duets.[2]

Ella Fitzgerald sang it on her 1961 album Ella Fitzgerald Sings the Harold Arlen Songbook, and Sammy Davis, Jr. sang it live with Buddy Rich on The Sounds of '66.

In 1967, The Fifth Estate charted their biggest hit with a cover of the song interpolating the bourée from Michael Praetorius's Terpsichore. For over forty years, it has been the highest charting version of all time of any Harold Arlen or Wizard of Oz song by any artist since the modern chart era began in 1940.[3]

Klaus Nomi performed a cover which was released as a single in 1982.

The British band Hefner ends their song "The Day That Thatcher Died" with children singing "Ding Dong, the witch is dead" in reference to former British prime minister, Margaret Thatcher.

It was also briefly parodied in the Lizzie McGuire episode 'The Rise and Fall of Kate' by Miranda Sanchez (LaLaine) & Gordo (Adam Lamberg) as a method of celebrating Kate Sanders (Ashlee Brillaut) fall from power...(in case people forgot about it)

In the season 3 premiere of the hit Fox TV series Glee, cast members Lea Michele and Chris Colfer sing a duet version, identical to the one performed by Barbra Streisand and Harold Arlen in 1966.