Big Bear or Mistahi-maskwa (c.1825 – 17 January 1888[1]) was a Cree leader notable for his involvement in the North-West Rebellion and his subsequent imprisonment.

Big Bear was born in the Canadian Northwest, probably near Fort Carlton in Saskatchewan.[1] Although he may have been Saulteaux, he was raised among the Plains Cree bands who wintered along the North Saskatchewan River.[1]

By 1862, according to Hudson's Bay Company (HBC) records, Big Bear was leading a large number of Cree near Fort Carlton, but soon moved to the area near Fort Pitt where he lived with a much smaller group.[1]

He participated in the 1870 Battle of the Belly River, and would later find conflict again in 1873, this time with Métis leader Gabriel Dumont. Canadian government records indicate that as of 1874, Big Bear led 65 lodges (approximately 520 people).[1]

Conflict with the Canadian government

In the 1870s, the newly created Canadian government began to investigate signing treaties with the Indigenous peoples of the Great Plains, and sent gifts to encourage friendship. While some leaders accepted the gifts, Big Bear was not interested, declaring "when we set a fox-trap we scatter pieces of meat all round, but when the fox gets into the trap we knock him on the head; We want no bait; let your chiefs come like men and talk to us."[1]

When representatives of Canadian government came to negotiate a series of numbered treaties for the return of land to the native peoples, Big Bear, one of the chief negotiators during Treaty 6, refused to sign, believing that the treaty was unfair and biased towards Canadian settlers. He campaigned against the Canadian government, preaching to other Native bands that the treaties were unfair.

Big Bear initially attempted to make alliances with other Natives, so that when the treaties were signed, they could all take their reserve land next to each other, effectively creating a First Nations country within Canadian borders. When the Canadian government heard of this plan, they immediately disallowed it, even though the treaties had previously stated that the Natives could take the reserve land wherever they wished. To further his cause, Big Bear even formed an uneasy alliance with his longtime rival, Crowfoot, Chief of the Blackfoot people.

Despite his opposition to the treaty and his mistrust of the governments intentions and methods, the dwindling of the buffalo herds ultimately prevented his people from continuing to rely on this traditional food source and pushed the Cree to the point of starvation in less than a decade. This desperate circumstance compelled Big Bear to finally accept Treaty 6 in order to obtain minimal food supplies for his people from the Canadian government. 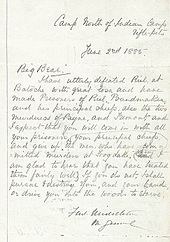 A letter from General Fred Middleton to Big Bear, urging him to surrender

When the Métis initiated the North-West Rebellion of 1885 under Louis Riel and Gabriel Dumont, Big Bear and his supporters played a minimal role in the overall uprising, but warriors from among Big Bear's people under the command of Wandering Spirit killed nine white men at Frog Lake in an incident that became known as the Frog Lake Massacre. Although Big Bear himself personally attempted to prevent the killings and subsequently expressed regret for the actions of the younger Cree warriors, the events at Frog Lake alarmed the Dominion Government. When 6,000 troops were sent to Batoche, Saskatchewan to smash the Métis resistance, the Canadian government used the Frog Lake Massacre as a reason to put down the Cree as well. Despite evidence of Big Bear's efforts to actually prevent the killings at Frog Lake, he was convicted for participation in the rebellion with a request from the jury for mercy. In 1885 the sixty year old chief was sentenced to three years in Stony Mountain Penitentiary, but was released from prison before serving his complete sentence as a result of failing health, and died shortly afterward.