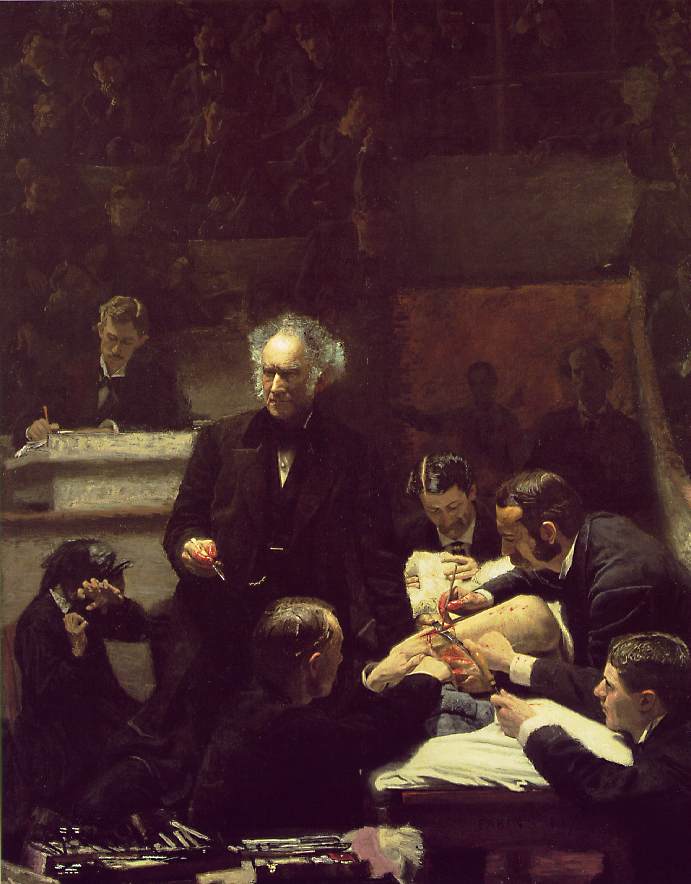 "The Gross Clinic" is an 1875 painting by . It is oil on and measures 8' by 6'6". Dr. , a seventy-year-old professor dressed in a black frock coat, lectures a group of students. Included among the group is a self-portrait of Eakins, who is seated to the right of the tunnel railing, sketching or writing. Seen over Dr. Gross' right shoulder is the clinic clerk, Dr. Franklin West, taking notes on the operation. Eakins's signature is painted into the painting, on the front of the surgical table.

Admired for its uncompromising realism, "The Gross Clinic" has an important place documenting the history of medicine—both because it honors the emergence of as a healing profession (previously, surgery was associated primarily with amputation), and because it shows us what the surgical theater looked like in the nineteenth century. The painting is based on a surgery witnessed by Eakins, in which Gross treated a young man for of the . Gross is pictured here performing a conservative operation as opposed to an amputation (which is how the patient would normally have been treated in previous decades). Here, surgeons crowd around the anesthetized patient in their frock coats. This is just prior to the adoption of a hygienic surgical environment (see ). "The Gross Clinic" is thus often contrasted with Eakins's later painting "The Agnew Clinic", which depicts a cleaner, brighter, surgical theater. In comparing the two, we see the advancement in our understanding of the prevention of infection.

Interestingly, the sex of the patient is not established by anything concrete in the painting itself. This fact makes "The Gross Clinic" somewhat unique, as it presents the spectator with a body that is naked and exposed, and yet is not entirely legible as male or female. Another intriguing element of this painting is the lone woman in the painting, seen in the middle ground of the painting, cringing in distress. She can be read as a female relative of the patient, acting as a chaperone. Her dramatic figure functions as a strong contrast to the calm, professional demeanor of the men who surround the patient. This bloody and very blunt depiction of surgery was shocking at the time it was first exhibited, and remains so for many viewers of the painting today.

The painting was submitted for the 1876 in , but was rejected. When it was eventually displayed, a critic for the "" wrote that it was "one of the most powerful, horrible, yet fascinating pictures that has been painted anywhere in this century...but the more one praises it, the more one must condemn its admission to a gallery where men and women of weak nerves must be compelled to look at it, for not to look at it is impossible." Controversy about the painting has centered on its violence, and on the melodramatic presence of the woman. Contemporary scholars have suggested that the painting may be read in terms of castration anxiety and fantasies of mastery over the body (e.g. ), and that it documents Eakins's ambivalence about representing sex difference (e.g. ). The painting has also been understood to be drawing an analogy between painting and surgery and as identifying the work of the artist with the emergence of surgery as a respected profession.

In 2002 an art critic for The New York Times called it "hands down, the finest 19th-century American painting."

After its purchase for $200 at the time of the Centennial Exhibition, the painting was housed in the College Building of , in Philadelphia until it was moved in the mid-1980s to Jefferson Alumni Hall. On , , the Thomas Jefferson University voted to sell the painting for $68 million to the in Washington and the new , now under construction in . The sale would represent a record price for an artwork made in the United States prior to World War II.

The proposed sale was seen as a secretive act