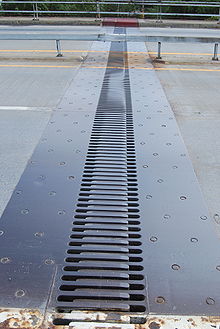 Expansion joint on a bridge

An expansion joint or movement joint is an assembly designed to safely absorb the heat-induced expansion and contraction of various construction materials, to absorb vibration, to hold certain parts together, or to allow movement due to ground settlement or earthquakes. They are commonly found between sections of sidewalks, bridges, railway tracks, piping systems, ships, and other structures.

Throughout the year, building faces, concrete slabs, and pipelines will expand and contract due to the warming and cooling through seasonal variation, or due to other heat sources. Before expansion joint gaps were built into these structures, they would crack under the stress induced.

The expansion joint can be as simple as a caulked separation between two sections of the same materials. More recently, expansion joints have been included in the design of, or added to existing, brick exterior veneer walls for similar purposes. In concrete and concrete block ("CMU") construction, the term applied is control joint, but serves a similar purpose. 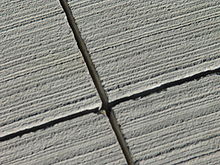 Control joints (often confused with expansion joints) are cut into the concrete or asphalt, and are different from expansion joints as shown in the photo. The joints are cut into the structure at regular intervals allow cracking to occur in a controlled fashion. Road control joints can be sealed with hot tar, cold sealant (such as silicone), or compression sealant (such as rubber). 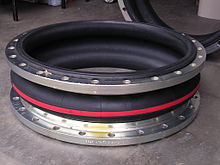 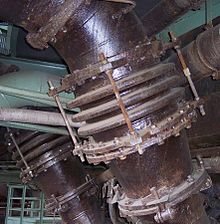 Pipe expansion joints are necessary in systems that convey high temperature commodities such as steam or exhaust gases, or to absorb movement and vibration. A typical type of expansion joint for pipe systems is a bellows which can be manufactured from metal (most commonly stainless steel), plastic (such as PTFE), fabric (such as glass fibre) or an elastomer such as rubber. A bellow is made up of a series of one or more convolutions, with the shape of the convolution designed to withstand the internal pressures of the pipe, but flexible enough to accept the axial, lateral, and/or angular deflections. Expansion joints are also designed for other criteria, such as noise absorption, anti-vibration, earthquake movement, and building settlement. Metal expansion joints have to be designed according to rules laid out by EJMA, while for fabric expansion joints only guidelines and a state-of-the-art description exists by the Quality Association for Fabric Expansion Joints.

Pipe expansion joints are also known as compensators, as they 'compensate' for the thermal movement.

Expansion joints are often included in industrial piping systems to accommodate movement due to thermal and mechanical changes in the system. When the process requires large changes in temperature, metal components change size. Expansion joints with metal bellows are designed to accommodate certain movements while minimizing the transfer of forces to sensitive components in the system.

Pressure created by pumps or gravity is used to move fluids through the piping system. Fluids under pressure occupy the volume of their container. The unique concept of pressure balanced expansion joints is they are designed to maintain a constant volume by having balancing bellows compensate for volume changes in the bellows (line bellows) which is moved by the pipe. An early name for these devices was “pressure-volumetric compensator”.[1]

Rubber expansion joint are mainly manufactured by manual wrapping of rubber sheets and fabric reinforced rubber sheets around a bellow shaped product mandrel. Besides rubber and fabric reinforced rubber sometimes also steel wires or metal rings are added for additional reinforcement. After the entire product is build up on the mandrel it is covered with a winding of (nylon) peel ply to pressurize all layers together before pressurization. Because of the labor intensive production process large part of the production has moved to eastern Europe and Asian countries.

Some types of rubber expansion joints are made with a molding process. Typical joints that are molded are medium sized expansion joints with bead rings which are produced in large quantities. These rubber expansion joints are manufactured on a cylindrical mandrel, which is wrapped with bias cut fabric ply. At the end the bead rings are positioned and the end sections are folded inwards over the bead rings. This part is finally placed in a mold and molded into shape and vulcanized. This is a highly automated solution for large quantities of the same type of joint.

Lately new technology has been developed to wind rubber and reinforcement layers on the (cylindrical or bellow shaped) mandrel in an automated fashion using industrial robots instead of manual wrapping. The automated production with a robot is fast and accurate which provides a repeatable high quality. Another aspect of using industrial robots for the production of rubber expansion joints is the possibility to apply an individual reinforcement layer instead of using pre-woven fabric. The fabric reinforcement is pre-woven and cut at the preferred bias angle. With individual reinforcement it is possible to add more or less fiber material at different sections of the product by changing the fiber angles over the length of the product. [2]

Internal liners can be used to either protect the metallic bellows from erosion or reduce turbulence across the bellows. They must be used when purge connectors are included in the design. In order to provide enough clearance in the liner design, appropriate lateral and angular movements must be specified by the designer. When designing an expansion joint with combination ends, flow direction must be specified as well.[3]

External covers should be used to protect the internal bellows from being damaged. They also serve a purpose as insulation of the bellows. Covers can either be designed as removable or permanent accessories. [4]

In systems that have a media with significant particulate content (i.e. flash or catalyst), a barrier of ceramic fiber can be utilized to prevent corrosion and restricted bellows flexibility resulting from the accumulation of the particulate. Purge connectors may also be utilized to perform this same function. Internal liners must also be included in the design if the expansion joint includes purge connectors or particulate barriers.[5]

Limit rods may be used in an expansion joint design to limit the axial compression or expansion. They allow the expansion joint to move over a range according to where the nut stops are placed along the rods. Limit rods are used to prevent bellows over-extension while restraining the full pressure thrust of the system in the case that a main . Bellows Catalog: Limit Rod], U.S. Bellows, Inc. (retrieved 31 August 2010)

Expansion joints are required in large ducted air systems to allow fixed pieces of piping to be largely free of stress as thermal expansion occurs. Bends in elbows also can accommodate this. Expansion joints also isolate pieces of equipment such as fans from the rigid ductwork thereby reducing vibration to the ductwork as well as allowing the fan to “grow” as it comes up to the operating air system temperature without putting stress on the fan or the fixed portions of ductwork.

An expansion joint is designed to allow deflection in the axial (compressive), lateral (shear), or angular (bending) deflections. Expansion joints can be non-metallic or metallic (often called bellows type). Non-metallic can be a single ply of rubberized material or a composite made of multiple layers of heat and erosion resistant flexible material. Typical layers are: outer cover to act a gas seal, a corrosion resistant material such as Teflon, a layer of fiberglass to act as an insulator and to add durability, several layers of insulation to ensure that the heat transfer from the flue gas is reduced to the required temperature and an inside layer.

A bellows is made up of a series of one or more convolutions of metal to allow the axial, lateral or angular deflection required(Note: If required).