Call on Me (Eric Prydz song)

Call on Me (Eric Prydz song)

Infobox Single
Name = Call on Me 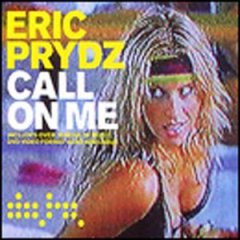 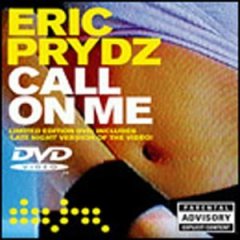 
"Call on Me" is a song performed by Swedish DJ and producer . The single received moderate sales success and topped several s. "Call on Me" is known for its , which features women performing in a sexually suggestive manner.

"Call on Me" is a track based on a re-recorded sample of 's song "Valerie". Winwood collaborated with Prydz on the song by re-recording his vocals. The original version of "Call on Me" was initially mistaken as a release by Together (a collaboration between and DJ Falcon), due to Falcon's use of the song in DJ sets and an advance pressing credited to Falcon and Bangalter. [ [http://www.thedjlist.com/djs/ERIC_PRYDZ/ Eric Prydz] at thedjlist.com. Retrieved on .]

The song reached number 1 in the at a time when the chart was experiencing low sales, due to the facing increasing popularity from the which at the time was not an eligible format in the chart. Until January 2005, Eric Prydz held the record for selling the lowest number of singles for a number-one chart position in the UK in any particular week: "Call on Me" sold 23,519 copies when it returned to the top of the charts on , . This record was broken once again by himself only a week later on , , with the single selling 21,749 copies that week. Nevertheless, it was the fourth biggest selling single of 2004 in the UK, selling 335,000 copies that year - including a with the uncut video - and staying five weeks at number-one on the UK Singles Chart, the longest run of any single that year.

The song entered the German singles chart at number one in early November 2004, and also repeated this feat in the . In , "Call on Me" debuted and peaked at #2.

The music video for "Call on Me" is directed by Huse Monfaradi and features an class of women wearing 1980s styled aerobics outfits performing sexually suggestive gym routines led by dancer and choreographer , much to the enjoyment of the sole man in the group, played by . The video was filmed in the Laban centre in , and spoofs a scene in the film "Perfect" starring and . [cite web |url=http://www.ilovecallonme.com/aboutthevideo.html |title=I LOVE ERIC PRYDZ - CALL ON ME |accessdate=2008-08-10]

While being interviewed by Chris Evans for UK Radio Aid, a 12-hour fundraising broadcast for tsunami victims, ex-UK Prime Minister said: "The first time it came on, I nearly fell off my rowing machine." [cite web|url=http://www.femalefirst.co.uk/health/1462004.htm|title=Femalefirst.co.uk] Many politicians and family groups have pushed for the video to be banned,Fact|date=February 2008 but there are actually two videos — an edited one shown in daylight hours and a late night version which is uncut and features the dancers rubbing their breasts and one dancer slapping her buttocks.

The video was the highest-downloaded music video of all time in Australia, downloaded over 35,000 times through "3 Mobile mobile phones with technology in association with the Rage music television show. presented the '3 Mobile' phone provider with the mobile equivalent of a gold record in April 2005.

Due to the popularity and high demand for the video, a feature length aerobics DVD was later released, titled "Pump It Up - The Ultimate Dance Workout", which featured the dancers from the "Call on Me" video performing aerobics routines to various popular dance music songs.

In 2006, as tribute to the "Call on Me" video, a sequel was created with the same principal dancers in "The Hughes Corporation" techno remix of 's 1983 "".

The video spun off a parody version called "(Don't) Call on Me" [cite web|url=http://www.ifilm.com/video/2681864|title=ifilm.com] where four young men dance in a very feminine way. This parody has had some success: since October 2005, it has been viewed close to 90,000 times on the website.

In April 2008, inspired by the video, several artists in Houston, Texas began a series of guerrilla art performances which they call sexyATTACK. [cite web|url=http://sexyattack.blogspot.com|title=sexyATTACK ] The artists perform a modified version of the dance sequence for unsuspecting audiences in various public spaces including libraries, parks, museums, and grocery stores.

End of the year charts