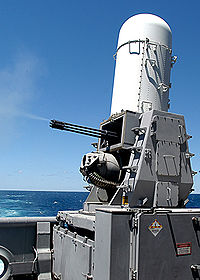 A close-in weapon system (CIWS), often pronounced sea-whiz, is a naval shipboard point-defense weapon for detecting and destroying at short range incoming anti-ship missiles and enemy aircraft which have penetrated the outer defenses.

Nearly all classes of modern warship are equipped with some kind of CIWS device.

A gun based CIWS usually consists of a combination of radars, computers, and multiple barrel rapid-fire medium-calibre guns placed on a rotating gun mount. Examples of gun based CIWS products in operation are:

Missile systems do not have the same limitations of gun systems. Because of their greater range, a missile-CIWS can also be dual-used as a short-ranged area-defense anti-air weapon, eliminating the need for a second mount for this role.

After an inertial guidance phase, a CIWS missile relies on infra-red, passive radar/ESM or semi-active radar terminal guidance, or a combination of these. The ESM-mode is particularly useful since most long-range anti-ship missiles use radar to home in on their targets. Some systems allow the launch platform to send course-correction commands to the missile in the inertial guidance phase.

CIWS are also used in a land based anti-mortar and missile defense role to protect fixed and temporary bases and other facilities.[6][7]

On a smaller scale, active protection systems are used in some tanks, and several are in development. The Drozd system was deployed on Soviet Naval Infantry tanks in the early 1980s, but later replaced by explosive reactive armour. Other systems are available or under development are the Russian (Arena), Israeli (Trophy), American (Quick Kill) and the South African-Swedish (LEDS-150).