The Beretta 92 (also Beretta 96 and Beretta 98) is a series of semi-automatic pistols designed and manufactured by Beretta of Italy. The model 92 was designed in 1972 and production of many variants in different calibers continues today. The United States armed forces replaced the M1911 .45 ACP pistol in 1985 with the military spec Beretta 92F, the M9.

Although only 5000 copies of the original design were manufactured from 1975 to 1976, the design is currently produced in four different configurations (FS, G, D and DS) and four calibers:

The Beretta 92 pistol evolved from earlier Beretta designs, most notably the M1922 and M1951. From the M1922 comes the open slide design, while the alloy frame and locking block barrel (originally from Walther P38) were first used in the M1951. The grip angle and the front sight integrated with the slide were also common to earlier Beretta pistols.

The Beretta 92 first appeared in 1975[1] and was designed by Carlo Beretta, Giuseppe Mazzetti and Vittorio Valle, all experienced firearms designers on the Beretta design team.

In order to meet requirements of some law enforcement agencies, Beretta modified the Beretta 92 by adding a slide-mounted combined safety and decocking lever, replacing the frame mounted manual thumb safety. This resulted in the 92S which was adopted by several Italian law enforcement and military units. The later relocation of the magazine release button means these models (92 & 92S) cannot necessarily use later magazines, unless they have notches in both areas.

The extremely rare 92SB, Initially called the 92S-1, was specifically designed for the USAF (US Air Force) trials (which it won), the model name officially adopted was the 92SB. It included the changes of the 92S, added a firing pin block (thus the addition of the "B" to the name), and relocated the magazine release catch from the bottom of the grip to the lower bottom of the trigger guard.

Beretta modified the model 92SB slightly to create the 92SB-F (the "F" added to denote entry of the model in U.S. Government federal testing) and, later, the 92G for French Government testing, by making the following changes:

The FS has an enlarged hammer pin that fits into a groove on the underside of the slide. The main purpose is to stop the slide from flying off the frame to the rear if it cracks. This was in response to reported defective slides during U.S. Military testing.

The Beretta 92's open slide design ensures smooth feeding and ejection of ammunition and allows easy clearing of obstructions. The hard-chromed barrel bore reduces barrel wear and protects it from corrosion. The falling locking block design provides good accuracy and operability with suppressors due to the in-line travel of the barrel. This is in contrast to the complex travel of Browning designed barrels. The magazine release button is reversible with simple field tools. Reversing the magazine release makes left-handed operation much easier.

The 92 also spawned several variants of similar internal design. The Beretta 90two is a full-size variant of the 92-series with a redesigned slide and a polymer frame that has an internal recoil buffer, user changeable grips and an accessory rail.

The Beretta 92 is available in many configurations each with a distinct model name. Combining the various options results in more than 50 different configurations, but the major variants are defined by their operation caliber (92/96/98), operation (F/G/D) and combination of optional items (Inox/Brigadier slide/Compact length):

Each model name starts with two digits identifying the caliber:

F Models
Also known as the 92SB-F, the model 92 F (adopted by the US Army as the M9 Pistol) has a double-action first trigger pull, followed by a single-action trigger pull for subsequent rounds. The "F" and "FS" models have a safety lever that also functions as a decocking lever.
G Models
The G models (designed for the French "Gendarmerie Nationale") were adopted by the French Military as PAMAS ; they feature a manual decocking lever only instead of the safety-decocking lever of the 92 FS. When the decocking lever is released, it automatically returns to the ready to fire position. There is no manual safety.
DS Models
The DS models are "double action only" pistols: the hammer always follows the slide forward to come to rest in the double action position (the hammer never stays cocked). The hammer spur has been removed, and is flush with the rear of the slide. The manual safety lever on the slide provides the same function as it does on the 92 FS.
D Models
The D models are also "double action only" pistols. They are identical to the DS models but without the manual safety (the lever has also been eliminated).
Centurion Models
These pistols offer the frame (and same magazine capacity) of the basic 92 FS model and the reduced length of the Compact version. Special G Centurion, DS Centurion and D Centurion models are available in some countries.
Competition Conversion Kit Models
The standard model can be converted with a special conversion kit into a competition target pistol. The kit includes a 7.3 in (190 mm) barrel with counterweight and elevated front sight, a fully adjustable target rear sight and ergonomic walnut grips.
Target Models
Designed for competition shooting, these models meet all U.I.T.S. standards for large caliber pistols (P.G.C.). They differ from basic 92 FS in the following aspects: 150 mm (5.9 in) barrel, with aluminum counterweight sleeve, fully adjustable target rear sight, ergonomic walnut grips with "orange peel" anti-slip finish.
Inox Models
The Inox models (from the Italian "inoxidable" meaning non-oxidizing) feature the following parts made in stainless steel: the barrel, the slide (including the extractor, the safety and the right-side manual safety lever), the trigger (and trigger pin), and slide stop lever. 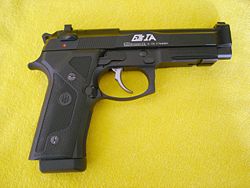 Elite I
(1999–2001)
Pistols with this option include the heavier Brigadier bruniton slide with front serrations and Elite designation, Inox finish (silver) stainless barrel, thin skeletonized hammer, and bevel of the magazine well. A flat hammer spring cap was standard as well as the decock only (G-Model) feature and dovetailed front sight. It was introduced in 1999 and replaced by the Elite II option in 2001.
Elite IA
(2001–2006)
This option is essentially a black Vertec with a bruniton Brigadier G slide having the Elite 1A designation and a thicker skeleton hammer. The 4.7 in (120 mm) stainless barrel with Inox finish was also changed to the blackened stainless version like black Vertecs.
Elite II
(2001–2006)
This option replaced the Elite I option in 2001 and includes the same features as the original Elite plus removable Novak type sights, extended magazine release catch, checkered front/rear grip strap, thicker (than Elite I) skeletonized hammer, and lighter D-spring. This option is available only with the stainless G-Model slide, also with front serrations. The stainless barrel for the Elite II has a target crown.

Inox
(present)
Stainless barrel and slide (frame anodized to match color). Can have either black or stainless controls.
Compact L
(1992–)
Shorter barrel, slide, and more compact frame (13-round magazine capacity).
Compact Type M
(1992–)
Similar to the Compact L, but has a slimmer grip that accepts only a single stacked 8-round magazine.
Centurion
(1992–1998)
Shorter barrel and slide (like "Compact"), but with standard-sized frame that has a slightly shorter dust cover.
CB
(1992–1993)

To keep in line with the introduction of laws in some locations restricting magazines that hold more than 10 rounds, Beretta now manufactures magazines that hold fewer than the factory standard 15 rounds. These magazines have heavier crimping (deeper indentations in the side) to reduce the available space while still keeping the same external dimensions and ensuring that these magazines can be used on existing firearms.

Italian magazine manufacturer Mec-Gar now produces magazines in blue and nickel finishes with a 18 round capacity, which fit flush in the magazine well on the 92 series. Mec-Gar also produces an extended 20 round blued magazine that protrudes below the frame by 3⁄4 inches (19 mm). These magazines provide users in unrestricted states with an even higher capacity.

The Beretta 93R is a significantly redesigned 92 to provide the option of firing in three-round bursts. It also has a longer ported barrel, heavier slide, fitting for a shoulder stock, extra forward grip, and an extended magazine. Unlike other Berettas in the 90 series it is single-action only, does not have a decocker, and very few are around today.

The Beretta 92 was designed for sports and law enforcement use and, due to its reliability, was accepted by military users in South America. A large contract for the Beretta 92 was with the Brazilian army, for which Beretta set up a factory in Brazil. This factory was later sold to the Brazilian gunmaker Taurus (Forjas Taurus S/A ). Taurus makes these pistols (called the PT92) without the need for a license from Beretta since their design is based on the original Beretta 92, whose patents have since expired. The PT92 can be distinguished from its modern Beretta counterpart primarily by having the safety mounted on the frame as opposed to on the slide like the Beretta. Though mechanically similar to the original, the PT92s differ from the early 92s by having a trigger guard similar to the modern 92s (the originals were rounded) and a magazine release in the same place as the modern 92s (the originals were at the bottom of the grip.)

The Turkish company MKEK - Makina ve Kimya Endustrisi Kurumuhas - been manufacturering a copy of the Beretta 92F as the Regard MC. There has been speculation that these were being made under contract from Beretta. Some of these pistols were imported into the United States by the company American Tactical Imports as the American Tactical 92 or AT-92. 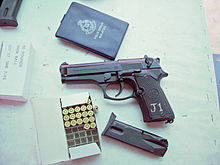