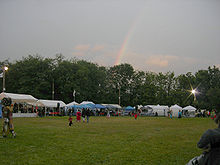 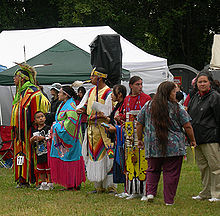 Dancers in regalia during the grand entry of the 2007 Seafair Indian Days Pow Wow.

The Daybreak Star Cultural Center is a Native American cultural center in Seattle, Washington, described by its parent organization United Indians of All Tribes as "an urban base for Native Americans in the Seattle area." Located on 20 acres (81,000 m²) in Seattle's Discovery Park in the Magnolia neighborhood, the center owes its existence to Bernie Whitebear and other Native Americans, who staged a generally successful self-styled "invasion" and occupation of the land in 1970 after most of the Fort Lawton military base was declared surplus by the U.S. Department of Defense. "The claim [Whitebear and others made] to Fort Lawton was based on rights under 1865 U.S.-Indian treaties promising reversion of surplus military lands to their original owners."[1][2]

The existing building, a work of modern architecture incorporating many elements of traditional Northwest Native architecture, designed by Arai Jackson Architects and Planners, dates from 1977. In 2004, plans were approved to supplement it with a complex of three more related buildings, to be known as the People's Lodge, which was Bernie Whitebear's final dream project before he died of cancer in 2000[3] However, in 2006, after agreements had been reached between the tribes, the city and nearby residents to reduce the originally-planned size to one all parties agreed to, a decision was made to postpone construction indefinitely for lack of funds.

Daybreak Star, a major nucleus of Native American cultural activity in its region, functions as a conference center, a location for pow wows, the location for a Head Start school program, and an art gallery. The center's permanent art collection includes a variety of large art works by and about Native Americans, notably "Blue Jay", a 30 foot (9 m) wide, 12 foot (3.7 m) high sculpture by Bernie Whitebear's brother Lawney Reyes, which came to the Center in 2004 after hanging prominently for over 30 years at the Bank of California building in downtown Seattle. (The Bank of California merged with Union Bank in 1996 to form Union Bank of California.) Also included in that donation was a major oil painting by Guy Anderson based on a traditional Northwest Native representation of a whale.

In 1970, it became clear that the U.S. federal government would be giving up much of the grounds of Fort Lawton. The state's two U.S. Senators, Henry M. "Scoop" Jackson and Warren G. Magnuson managed to amend the U.S. Land and Water Conservation Act of 1965, reducing the previous 50-100 percent cost of acquiring surplus federal government property to 0-50 percent, making it feasible for someone other than a wealthy developer to acquire the property. At the same time, many of Seattle's urban Indians were concerned to gain a land base within the city. A group arose, initially called "Kinatechitapi", Blackfoot for "All Indians"; the name was a nod of respect to the Indians Of All Tribes (IAT) who were then occupying Alcatraz Island in San Francisco Bay.[5] Joe DeLaCruz, leader of the Quinault, networked out to every tribe in Washington State to try to gain their support.[6]

Kinatechitapi's first efforts to open discussions with the City of Seattle in advance of the turnover of the land failed. The City, under mayor Wes Uhlman, said it would not open discussions until it had the land, and referred them to the Bureau of Indian Affairs (BIA).[5] As Whitebear later wrote, "This action displayed their ignorance of both the BIA's restricted service policy, which excluded urban Indians, and also the disregard and disfavor urban Indians held for the BIA."[5] The City further asserted that the then-current Indian Center in a former church near Stewart Street was an adequate facility for Seattle's Indians. Furthermore, the Magnolia Community Club, a group with significant political clout, were opposed to an Indian presence on the Fort Lawton land.[7]

The Kinatechitapi split between a faction that called for direct action and one that preferred to wait until the land was in city hands and then attempt negotiation.[8] Prominent among those who preferred to wait was Pearl Warren, founder of the American Indian Women's Service League, who was concerned that a militant attitude would undercut the existing city-funded services.[9] It was peaceably agreed that those who wished to take more extreme action would not use the name "Kinatechitapi",[8] but the resulting tensions led to Warren losing the next election for the Service League presidency to Joyce Reyes, leading to a united front among all significant Seattle Indian organizations.[10]

The more militant faction, led by Bernie Whitebear, soon adopted the name "American Indian Fort Lawton Occupation Forces".[8] Also in that faction was Bob Satiacum, initially a rival to Whitebear for the leadership role. That matter was quickly settled by a group vote that went overwhelmingly in Whitebear's favor.[9] Some of the Indians of All Tribes came in from Alcatraz, including Richard Oaks, leader of that action; other activists came from Canada. Another arrival was Grace Thorpe, daughter of athlete Jim Thorpe.[11] A plan was formed to invade the base from two directions, with one group scaling the bluffs from Elliott Bay while another scaled the fence near the Lawton Wood community on the north side of the base. The group committed itself that its invasion would be nonviolent.[12]

Meanwhile, ongoing protests around nearby Fort Lewis, including by American Indian soldiers, were tying native rights to opposition to the Vietnam War. At the behest of the Fort Lewis coalition, Jane Fonda was in town when the invasion took place.[11] According to Whitebear, her presence "captured the imagination of the world press. American Indians were attacking active military forts along with one of the nation's leading opponents of United States involvement in the Vietnam War." Her presence transformed "an effort to secure a land base for urban Indians" into "a bizarre, ready-for-prime-time, movie scenario, complete with soldiers, modern-day Indians, and anti-war activists. Without really appreciating it at the time, the Indian movement had achieved through Jane Fonda's presence, a long-sought credibility which would not have been possible otherwise."[13]

On the evening of March 7, 1970, at a pow-wow held at the Filipino Community hall in south Seattle, invasion plans were announced. The following day, March 8, 1970, about 100 "Native Americans and sympathizers" confronted military police in riot gear at the fort, while about 500 supporters staged a legal protest outside the gates. Some of the invaders managed to get as far as the base chapel, where a Sunday service was in progress, but in general, skirmish lines were quickly formed and the invasion was contained.[11][14] Some of the invaders failed to stick to the original plan of non-violence, especially when confronted by what Whitebear characterized as "overly aggressive handling by the MPs". MPs (Military Police), aided by regular Army troops and Seattle Police, initially placed the invaders in the stockade, then ejected them from the fort, but they were able to establish a tipi encampment outside the fort.[11] Mayor Uhlman and Senator Jackson held a press conference about the Fort Lawton property, promising a city park. They made no mention of the Indians.[15]

Organizing as the United Indians of All Tribes Foundation with Whitebear as executive director, the Indians used tactics ranging from politicking to occupation of land to celebrity appearances.[15] There were three months of what Whitebear would later describe as "Invasion, arrests, jailings, letters of expulsion from military property, physical escort off the fort, re-invasion." The Army cordoned off the fort with concertina wire, brought in two companies of troops from Fort Lewis, and even dug foxholes.[8]

By this time over 40 non-Indian organizations in King County supported the Indians' efforts. Gary and Beverly Beaver, Randy Lewis, Grace Thorpe, Douglas Remington, and Bernie Whitebear appeared before a congressional committee chaired by Morris Udall, and received support from Seattle congressman Brock Adams.[16] Whitebear forged a relationship with Tom McLaughlin, deputy regional director of the United States Department of Health, Education, and Welfare and through him with Buck Kelley, the regional director. UIATF, which had previously avoided dealing with the BIA, now went through the National Congress of American Indians to approach the BIA and request a freeze on plans to transfer land at Fort Lawton until the issue between UIATF and the City was resolved. BIA commissioner Louis Bruce did impose such a freeze for a time, but eventually backed off at the behest of the Department of the Interior. When the federal government officially put the land up for offers, UIATF filed to acquire a portion of the fort directly from the federal government. Thanks to Whitebear's maneuvering, UIATF's application to acquire part of the land was technically filed prior to the City's application for the whole parcel.[15][16]

The federal General Services Administration ultimately insisted that the City and UIATF come up with a joint plan. Negotiations culminated in November 1971 to give them a 99-year lease on 20 acres (81,000 m²) in what would become Seattle's Discovery Park, with options for renewal without renegotiation.[11][14][17][18] In addition, the City gave $600,000 to the American Indian Women' Service League for a social services center.[11]

Whitebear was soon elected CEO of the UIATF,[19] where he successfully oversaw fundraising (including a million dollar grant from the state) and construction. Whitebear's brother Lawney Reyes joined with architects Arai Jackson to design the facility, which opened in 1977.[20][21]

In the same era when Daybreak Star was being constructed, Whitebear served on the Seattle Arts Commission, from whom he obtained an $80,000 arts grant for the center.[22]