Firedamp is a flammable gas found in coal mines. It is the name given to a number of flammable gases, especially methane. It is particularly commonly found in areas where the coal is bituminous. The gas accumulates in pockets in the coal and adjacent strata, and when they are penetrated, the release can trigger explosions.

Firedamp is explosive at concentrations between 4% and 16%, with most violence at around 10%, and caused much loss of life in coal mines before the invention of the Davy lamp.[1] The invention was prompted by the Felling mine disaster near Newcastle upon Tyne claiming 92 lives on 25 May 1812. Davy experimented with iron gauze, determining the minimum size of the gaps and the optimum wire thickness to prevent a flame passing through the gauze. If a naked flame was thus enclosed totally by such a gauze, then methane could pass into the lamp and burn safely above the flame. He did not patent his invention.

Even after the safety lamps were brought into common use, firedamp explosions could still occur from sparks produced when coal contaminated with pyrites was struck with metal tools. The presence of coal dust in the air increased the risk of explosion with firedamp, and indeed could cause explosions itself. 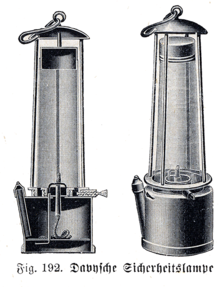 The Tyneside coal mines in England had the deadly combination of bituminous coal contaminated with pyrites, and a great number of lives were lost in accidents due to firedamp explosions, including 102 dead at Wallsend in 1835.[1] A continuous flame was produced at Whitehaven sometime before 1733, described as being "a yard wide and two yards long." The miners dealt with it by piping it to the outside.[2]

Rather than the Davy lamp, Tyneside miners used a Geordie lamp, a similar safety lamp designed by George Stephenson. After the widespread introduction of the safety lamp, explosions continued because the early Davy lamps were fragile and easily damaged. The iron gauze for example only needed to lose one wire to become unsafe. The light was also very poor, and there were continuous attempts to improve the basic design. The height of the cone of burning methane in a flame safety lamp can be used to estimate the concentration of the gas in the local atmosphere. It was not until the 1890s that safe and reliable electric lamps became available in collieries.

Gases (other than air) in coal mines in England were collectively known as "damps". This comes from the German word Dampf (meaning "vapour"), and was probably introduced when German miners and mine engineers were brought to England in the 17th century to help in the development of deep mining[3]. This is not certain, however, as the technical term for gases (air and others) among German miners is Wetter (literally "weather").