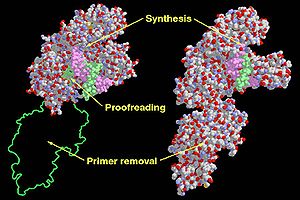 Functional domains in the Klenow Fragment (left) and DNA Polymerase I (right).

DNA Polymerase I (or Pol I) is an enzyme that participates in the process of DNA replication in prokaryotes. It is composed of 928 amino acids, and is an example of a processive enzyme - it can sequentially catalyze multiple polymerisations. Discovered by Arthur Kornberg in 1956,[1] it was the first known DNA polymerase (and, indeed, the first known of any kind of polymerase). It was initially characterized in E. coli, although it is ubiquitous in prokaryotes. In E. coli and many other bacteria, the gene which encodes Pol I is known as polA.

In the replication process, DNA Polymerase I removes the RNA primer (created by Primase) from the lagging strand and fills in the necessary nucleotides of the Okazaki fragments (see DNA replication) in 5' -> 3' direction, proofreading for mistakes as it goes. It is a template-dependent enzyme - it only adds nucleotides that correctly base pair with an existing DNA strand acting as a template. Ligase then joins the various fragments together into a continuous strand of DNA.

Despite its early characterisation, it quickly became apparent that Polymerase I was not the enzyme responsible for most DNA synthesis — DNA replication in E. coli proceeds at approximately 1,000 nucleotides/second, while the rate of base pair synthesis by Polymerase I averages only between 10 and 20 nucleotides/second. Moreover, its cellular abundance of approximately 400 molecules per cell did not correlate with the fact that there are typically only two replication forks in E. coli. Moreover, it is insufficiently processive to copy an entire genome, as it falls off after incorporating only 25-50 nucleotides. Its role in replication was proven when, in 1969, John Cairns isolated a viable Polymerase I mutant that lacked the polymerase activity.[2] Cairns' lab assistant Paula De Lucia created thousands of cell free extracts from E.coli colonies and assayed them for DNA-polymerase activity. The 3,478th clone contained the polA mutant, which was named by Cairns to credit "Paula" [De Lucia].[3] It was not until the discovery of DNA polymerase III that the main replicative DNA polymerase was finally identified.

DNA polymerase I obtained from E. coli is used extensively for molecular biology research. However, the 5' -> 3' exonuclease activity makes it unsuitable for many applications. Fortunately this undesirable enzymatic activity can be simply removed from the holoenzyme to leave a useful molecule called the Klenow fragment, widely used in molecular biology. Exposure of DNA polymerase I to the protease subtilisin cleaves the molecule into a smaller fragment, which retains only the DNA polymerase and proofreading activities.