Nationwide Building Society is a British building society, and is the largest in the world. It has its headquarters in Swindon, England, and maintains significant administration centres in Bournemouth and Northampton. Until mid-2009, when it announced the withdrawal of the service, it had been the only UK financial institution to offer completely fee-free transactions (both electronic and cash withdrawals) worldwide with its VISA debit cards. Nationwide was by far the largest British building society that did not convert to a bank in the wave of demutualisations that occurred from the late 1980s to the late 1990s. As of 2008, it is larger than all the other remaining British building societies combined, measured by total assets.[1] It is a member of the Building Societies Association and the Council of Mortgage Lenders.

Nationwide Building Society provides financial services both directly, and through around 700 branches. Nationwide is a major provider of both mortgage loans and savings in the UK, as well as personal banking such as loans, credit cards, bank accounts and insurance products. Nationwide.co.uk is the main website and sells most products and has around 4.5 million monthly visitors and 1.9 million active internet bankers.

The Society's origins lie in Wiltshire (1846), Northampton (1848) and within the co-operative movement in London (1883).[2] Over a hundred mergers later — most notably the merger between the Nationwide and the Anglia Building Society in 1987 — they are now the UK's third largest mortgage lender and savings provider. More significantly, it is the largest building society in the world and committed to staying mutual. The society is keen to emphasise that it does not have shareholders, it has members.

In August 2007 the Society merged with Portman Building Society, creating a mutual body with assets of more than £160bn.

In the financial crisis of 2007–2010, the Nationwide has acted to safeguard the mutual sector, acquiring the ailing Cheshire and Derbyshire building societies in September 2008[3][4][5][6] and the Dunfermline Building Society on 30 March 2009.[7] No member votes were taken, and no windfall benefit were given to society members. The Derbyshire, Cheshire and Dunfermline brand names will continue as separate trading arms of the Nationwide group.

In October 2011, Moody's Analytics downgraded the credit rating of 12 UK financial firms, including Nationwide, because of a reduced likelihood of government support for smaller institutions in any financial crisis.[8] 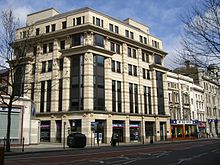 A high-street branch of Nationwide Building Society in Peterborough, Cambs.

"Sponsored by you" logo

The company is the former title sponsor of the Football League, the Football Conference and the FA Women's Premier League. Nationwide also sponsored the four national teams of the United Kingdom: England, Wales, Scotland and Northern Ireland until 2010 and also the football teams Northampton Town and Swindon Town until 2007 when the contracts were terminated. Nationwide has offices in both towns.

The company used to be the sponsor of the Nationwide Mercury Music Prize until March 2009. The prize is currently presented by BarclayCard.

It also has the following divisions: