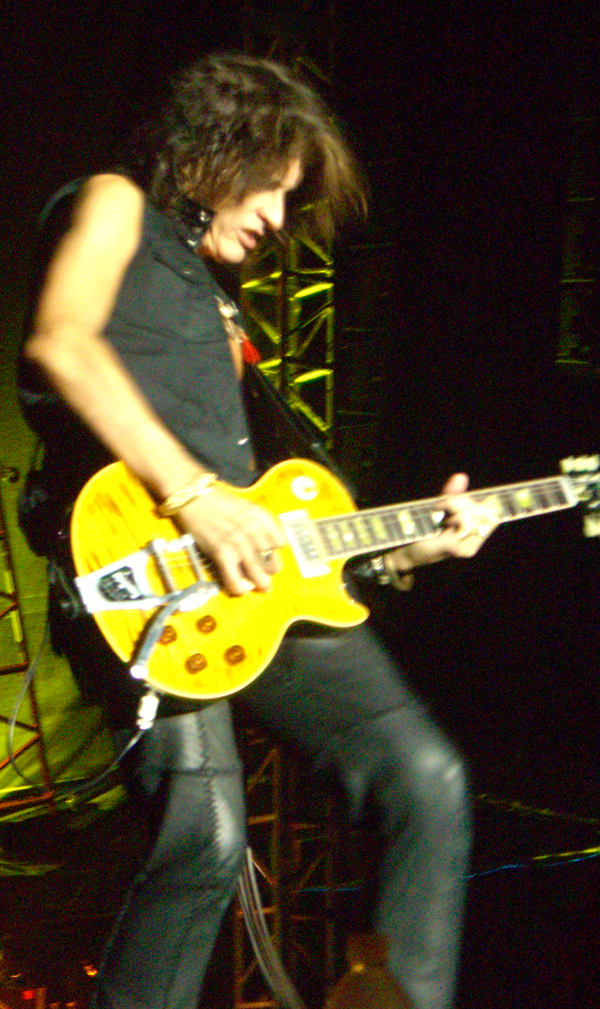 Anthony Joseph "Joe" Perry (Born , in ) is the lead , backing and occasional lead vocalist, and contributing songwriter for the rock band . He was ranked 48th in the ""s list - "The 100 Greatest Guitarists of All Time".

The paternal side of Perry's family are Portuguese, originally from . His grandfather changed the family's name from Pereira to Perry upon arriving in the . His side is Italian, more specifically . [cite web|url=http://www.imdb.com/name/nm0675128/bio|title=Joe Perry (I)|accessdate=2008-07-05|publisher=imdb.com]

Perry grew up in the small town of . There, his father was an accountant and his mother a high school gym teacher and later an aerobics instructor. She later retired to Arizona when Perry's father died in 1975. Perry also attended the prep school , a boarding school of about 230 students in .

During Joe Perry's early years he formed a band with Tom Hamilton called The Jam Band. After meeting with , Joe & Tom would go on to form Aerosmith with him. While initially dismissed as knock-offs, the band came into its own during the mid-1970s with a string of hit records. Chief among these successes were "Toys in the Attic" (1975) and "Rocks" (1976), thanks largely to the prevalence of free-form, album-oriented . The group also managed hit singles on the AM dial with songs like "Dream On," "," "" and "."

During this time, Perry and vocalist became known as the "" for their notorious hard-partying and drug use. Hard core drug dealers made a cash grab following Aerosmith around the country knowing there would be an unlimited supply of customers. Aerosmith's crowd in these days earned the nickname "The Blue Army". So called by the band after the seemingly endless amount of teenagers in the audience wearing blue denim jackets and blue jeans. The audience was abundantly male with extremely long hair, one of the loudest of its day.

Following "Rocks", the group began to stumble - drug use escalated and the creative process became hampered by strained relationships within the band. They managed another hit record in 1977 with "", on which Perry sang lead vocals on the track "Bright Light Fright," considered by some to be one of the album's highlights. A fall of '77 tour was scheduled, but as the crowds got more dangerous, violence followed. An m-80 was thrown onstage in at The Spectrum in October 1977, injuring both Perry and Tyler.

Summer of 1979 saw the band headline over , , and Foreigner during the world music festival concerts. An argument backstage in Cleveland resulted in Joe Perry's wife throwing a glass of milk at Tom Hamilton's wife. This would prove to be the turning point that saw Perry quit Aerosmith, taking a collection of unrecorded material with him, which would later become the basis of his "" album.

By the end of the year, Perry had formed his own band - . Their debut record, "", reached #47 on the Billboard album charts, selling 250,000 copies domestically. While sales and reviews were respectable the group mainly thrived as a live act. It managed to do so even after its second album, "", went largely ignored.

In the end, the Project never solidified a lineup; all three studio releases would feature a different lead vocalist and the entire roster was replaced before their final effort (1983's "".) Even a brief stint with fellow Aerosmith exile, rhythm guitarist , failed to ignite things again and the group found themselves with minimal label support by 1984.

A compilation album, "", was released by an Australian Indie Record label in .

Return to the spotlight

Equipped with a new record label () and three new band members in singer , bassist Danny Hargrove and drummer Joe Pet, the band released "Once a Rocker, Always a Rocker" in 1983. The album met the same fate as its predecessor, selling a meager 40,000 copies without any promotion whatsoever. Despite the poor sales, The Project went out on a final tour in support of the album, adding then ex-Aerosmith guitarist Brad Whitford to the line-up. During this tour, The Project performed in a series of co-bills with . The following year, both Perry and Whitford would rejoin Aerosmith for a very successful reunion.

In 1986, Perry and Tyler collaborated with in a remake of their 1975 hit "Walk This Way," which brought their band renewed mainstream attention.

After completing drug rehabilitation, Aerosmith went on to collaborate with various big-name songwriters and producers to launch their true comeback. Another string of successful albums (most notably the triple-platinum "" in 1989) and many hit singles followed. Perry and Tyler resumed their tight friendship, again co-writing songs and performing very close together on stage.

In 1998, Perry helped conceive the group's first number one single, "I Don't Want to Miss a Thing," with pop songwriter . It appeared on the soundtrack to the hit film "".

From 2001 to present, Aerosmith has been heavily active in the music scene, and has toured every year.

In 2006, Perry performed alongside Steven Tyler for a three-song medley ("Dream On", "", "") with the as part of a nationally-televised event to celebrate the in .

Perry released his first solo record, the self-titled "Joe Perry", in May 2005. Recorded at his home studio (The Boneyard) in suburban Boston, with every instrument but the drums played by Perry himself. Critics also responded favorably; "" magazine crowned it with three-and-a-half (out of five) stars, declaring "A Joe Perry solo joint? about time!" He was also nominated for "Best Rock Instrumental" at the 2006 for the track "Mercy" but lost to .

Perry was married to Elyssa Jerret from 1975-1985, a union that gave him a son, Adrian. The couple had a turbulent relationship,Fact|date=July 2008 and she once bit him in the face during an .Fact|date=July 2008 Perry is now married to Billie Paulette Montgomery Perry; they have two children together, Tony and Roman, and she has a son from a previous relationship, Aaron. They married in 1985 after meeting on the set of his "Black Velvet Pants" video in 1983. Billie appears on one of Joe's guitars, which is dubbed "The Billie Perry Guitar." Tony and Adrian Perry are both founding members of the band TAB the Band.Perry's first grandchild, Austin, was fathered by his stepson Aaron, who is also the CEO for the "Joe Perry's Rock Your World" hot sauce brand.

Joe's sister-in-law is [http://www.poolcues.net/dminor/ Diana Minor] , a well-known pool player. Perry is one of her sponsors.

Perry is also known to bring his entire family with him on several of Aerosmith's concert tours in the recent past.

The main guitar associated with Joe Perry is the . He has used many different types of Les Pauls since the 70s, including Les Paul Juniors, Les Paul Standards, and Les Paul Customs. In the 1990s and early 2000s, Gibson issued a Joe Perry signature Les Paul guitar; this guitar was customized with an active mid-boost control, black chrome hardware, and a translucent black finish. However, in 2004, this model was replaced by another Joe Perry signature Les Paul, the Joe Perry Boneyard Les Paul. This guitar is characterized by Perry's custom "Boneyard" logo on the headstock and a figured maple top with a green tiger finish, and is available with either a stopbar tailpiece or a Bigsby tailpiece; Perry typically uses a Bigsby-equipped Boneyard model in Aerosmith and solo live shows. The Gibson Joe Perry was a present from his wife Billie and then he was allowed to manufacture it. Perry has also endorsed an affordable replica version of the Boneyard guitar made by Epiphone that carries the same USA made Burstbucker pickups as the Gibson model.

Perry also uses other Gibson models. Another model he uses frequently is a customized Gibson B.B. King "Lucille" guitar; however, instead of the black finish and "Lucille" signature on the headstock, Perry's guitar features a white finish, a "Billie Perry" signature on headstock and an image of Billie Perry on the front of the guitar. He has also used Gibson SGs, Firebirds, ES-175s, ES-335s, and ES-350s at various points in his career.

Perry has been known to play guitars of other luthiers and manufacturers. In the late 1970s and 1980s, Perry frequently used various Fender Stratocasters; many of these guitars were left-handed Strats turned upside-down and appropriately restrung. One of these "upside-down" models is still played occasionally by Perry onstage, usually for "". Perry also uses Fender Telecasters, some modified with neck humbuckers. In the late 1970s and early 1980s, Perry (along with fellow Aerosmith guitarist Brad Whitford) endorsed B.C. Rich guitars, and frequently used the Mockingbird (such as in the performance of "" in the film "Sgt. Pepper's Lonely Hearts Club Band") and 10-string B.C. Rich models. He has also been photographed playing what looks like, judging by the headstock logo, a custom built Spector guitar during the 80s.

The six-string bass guitar is a trademark of Perry's guitar sound; instead of playing it like an ordinary bass guitar, he uses it like a regular guitar, playing riffs, chords, and solos. The six-string bass helped to create the characteristic growl of Aerosmith's "", "Combination", and "Draw the Line". In the past, Perry used and Danelectro six-string basses; he also used a Gibson EB-6 for the bass solo on "King of the Kings" on the Joe Perry Project's "Once a Rocker, Always a Rocker" album (as indicated by the album's liner notes). Perry currently uses an Ernie Ball MusicMan six-string bass onstage.

For slide work, Perry typically uses a Dan Armstrong Lucite guitar, such as for "Draw the Line".

Joe has also been known to use a Distortion Pedal, a Klon Centaur overdrive, a talkbox, a Crybaby wah and a Digitech Whammy pedal.

Joe Perry currently has a collection of over 600 guitars.Fact|date=July 2008

Joe Perry has spearheaded the creation of an entire line of hot sauces entitled "Joe Perry's Rock Your World Hot Sauces", which are featured widely in the marketplace. A quesadilla featuring a flavor of the namesake hot sauce is available as an appetizer at . Additionally, Perry was featured in a television episode of "" with on a recent stop on Aerosmith's tour, in which he prepared a meal, displayed his passion for knives, discussed his hot sauce brand and cooking, and gave insight into what goes into meal preparation on Aerosmith tours.

Perry, along with Aerosmith band member and other partners, until recently co-owned Mount Blue, a restaurant in .

*He is a huge fan of early , particularly their first lead guitarist, Peter Green, which explains the occasional inclusion of the FM classics "Stop Messin' Round" and "Rattlesnake Shake" in 's sets. Steven Tyler has even mentioned that hearing Perry play "Rattlesnake Shake" brought them together.
*He is also a huge fan of guitarist and looked at him as one of his influences. Beck played onstage with Aerosmith in 1976, as a 'birthday present' for Perry.
*Perry was also strongly influenced by as evidenced in particular by some of the playing on the track song "The Mist Is Rising", and his covering the Hendrix classic "Red House" both with the Project and later with Aerosmith.
*He was a huge influence on Slash, Slash first heard Rocks by Aerosmith and that is what made him want to play guitar instead of race BMX bikes, in fact Slash owned Perry's old 59 Les Paul, but later returned it as a birthday present.

*Played on the 1978 solo album by Gene Simmons.
*Played on two tracks of the 1978 debut solo album by David Johansen.
*Perry is one of the few non-Kiss members to guest on stage with the masked band, as he wore a pair of 's boots and jammed in the song "Strutter" during a date of an Aerosmith/Kiss tour. Pictures can be viewed [http://www.rosshalfin.co.uk/kiss/kiss05.php# here] .
*Perry played on the guitar super-ensemble CD with his own track , the album also features Rush's , , , and others.
*He played the guitar solo in 's "", Joe Perry liked the use of sample and said once "It's great. The song lives again in another form."
*He also appeared in the video "#1"
*He performed a duet of "" with on "American Idol 6". [ [http://ca.entertainment.yahoo.com/s/12032007/6/entertainment-aerosmith-rock-india-first-time.html The top Entertainment news and headlines from Yahoo! Canada News ] ]
*He played with Tom Jones and later in a duet of Tom Jones and in the on July 1, 2007.
* He was part of an all-star lineup--including and 's -- that recorded the 2006 version of the theme song with