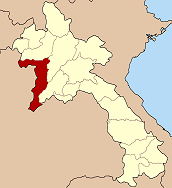 Xaignabouli (Lao ໄຊຍະບູລີ) is a province of , located in the northwest of the country.

The province is located in the northwest of the country, and covers all the area west of the river. It is bordered by to the north, Louangphabang and to the east, and (from the south clockwise) the Thai provinces Loei, Phitsanulok, Uttaradit, Nan and Phayao.

In 1904 the area of the province was ceded from Siam to the colony. In 1941 it was annexed by Thailand again under the name Lan Chang Province, but returned to the pre-war status in 1946.

The Xaignabouli province is home to Laos’ majority of domesticated . Approximately 75% of the nation’s 560 domesticated elephants work in Xaignabouli [Elefantasia 2008, "Who we are", 22 April 2008, http://www.elefantasia.org/spip.php?rubrique1&lang=en] . Their main work duties are within the logging industry, which causes a loss in both wild and domestic elephant habitat [Norachack, B 2002, 'The care and management of domesticated Asian elephants in Lao PDR', in Baker I & Kashio, M (eds), "Giants On Our Hands: Proceedings of the International Workshop on the domesticated Asian elephant,"FAO Regional Office for Asia and the Pacific, Bangkok, pp 172-180.] . The Xaignabouli province is also home to the annual [http://www.elefantasia.org/spip.php?article31&lang=en Elephant Festival,] organised in partnership by the Lao PDR National Tourism Authority,, provincial and district authorities.

The province is made up of the following districts: