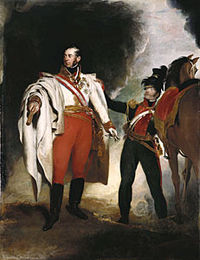 Karl Philipp was born 15 April 1771 in Vienna,[2] the son of Johann Nepomuk Anton of Schwarzenberg and Marie Eleonore Countess of Öttingen-Wallerstein.[citation needed]

He entered the imperial cavalry in 1788, fought in 1789 under Lacy and Loudon against the Turks, distinguished himself by his bravery, and became major in 1792. In the French campaign of 1793, he served in the advanced guard of the army commanded by Prince Josias of Coburg, and at Le Cateau-Cambrésis in 1794 his impetuous charge at the head of his regiment, vigorously supported by twelve British squadrons, broke a whole corps of the French, killed and wounded 3,000 men, and brought off 32 of the enemy's guns. He was immediately decorated with the Knight's Cross of the Military Order of Maria Theresa.[2]

After taking part in the battles of Amberg and Würzburg in 1796 he was raised to the rank of General-Major, and in 1799 he was promoted Feldmarschal-Leutnant. At the Battle of Hohenlinden he led a division in the right wing, and was almost the only Austrian general who emerged from that debacle with distinction.[3] During the retreat, his promptitude and courage saved the right wing of the Austrian army from destruction, and he was afterwards entrusted by the Archduke Charles of Austria with the command of the rearguard.[2] In 1804, Prince Karl Philipp was created Fürst zu Schwarzenberg in a title identical to, but separate from, that of his brother, Joseph, Prince of Schwarzenberg.[citation needed] In the war of 1805 he held command of a division under Mack, and when Ulm was surrounded by Napoleon in October he was one of the brave band of cavalry, under the Archduke Ferdinand of Austria-Este, which cut its way through the hostile lines. In the same year, he received the Commander's Cross of the Order of Maria Theresa and in 1809 he was awarded the Order of the Golden Fleece.[2] 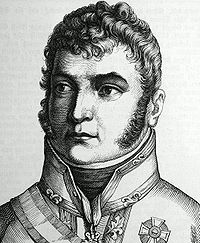 When in 1808, in view of a new war with France, Austria decided to send a special envoy to Russia, Schwarzenberg, who was persona grata at the Court of St Petersburg, was selected. He returned, however, in time to take part in the Battle of Wagram, leading a cavalry division in the Reserve Corps.[4] and was soon afterwards promoted General of Cavalry. After the peace of Vienna, he was sent to Paris to negotiate the marriage between Napoleon and the Archduchess Marie Louise of Austria. The prince gave a ball in honour of the bride on 1 July 1810, which ended in the death of many of the guests, including his own sister-in-law, in a fire.[2]

Napoleon held Schwarzenberg in great esteem, and it was at his request that the prince took command of the Austrian auxiliary corps in the Russian campaign of 1812. The part of the Austrians was well understood to be politically rather than morally hostile, and Schwarzenberg gained some minor successes by skilful manoeuvres without a great battle. Afterwards, under instructions from Napoleon, he remained for some months inactive at Pultusk.[5]

In 1813, when Austria, after many hesitations, took the side of the allies against Napoleon, Schwarzenberg, recently promoted to Feldmarschall, was appointed commander-in-chief of the allied Grand Army of Bohemia. As such, he was the senior of the allied generals who conducted the campaign of 1813-1814.[6] Under his command, the Allied army was mauled by Napoleon at the Battle of Dresden on 26–27 August and driven back into Bohemia. However, his army defeated pursuing French forces at the Battle of Kulm. Returning to the fray, he led the Allied army north again and played a major role in Napoleon's decisive defeat at the Battle of Leipzig on 16–18 October. During the invasion of France in 1814, he beat a French force at the Battle of Bar-sur-Aube in late February. He repelled an attack by Napoleon in the Battle of Arcis-sur-Aube on 20–21 March and overcame the last barrier before Paris by winning the Battle of Fère-Champenoise on March 25. His capture of the French capital on 31 March after the Battle of Paris resulted in the overthrow of Napoleon.[citation needed] 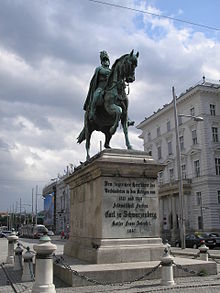 It is the fashion to accuse Schwarzenberg of timidity and over-caution, and his operations can easily be made to appear in that colour when contrasted with those of his principal subordinate, the fiery Blücher, but critics often forget that Schwarzenberg was an Austrian general first of all, that his army was practically the whole force that Austria could put into the field in Central Europe, and was therefore not lightly to be risked, and that the motives of his apparent pusillanimity should be sought in the political archives of Vienna rather than in the text-books of strategical theory. In any case his victory, however achieved, was as complete as Austria desired, and his rewards were many, the Grand Crosses of the Order of Maria Theresa and of many foreign orders, an estate, the position of President of the Hofkriegsrath, and, as a specially remarkable honour, the right to bear the arms of Austria as an escutcheon of pretence. But shortly afterwards, having lost his sister Caroline, to whom he was deeply attached, he fell ill. A stroke disabled him in 1817, and in 1820, when revisiting Leipzig, the scene of the Völkerschlacht that he had directed seven years before, he suffered a second stroke. He died there on 15 October.[6] 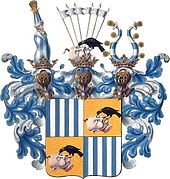 Coat of arms of Prince Schwarzenberg

His eldest son, Friedrich, Prince of Schwarzenberg (1800–70), had an adventurous career as a soldier, and described his wanderings and campaigns in several interesting works, of which the best known is his Wanderungen eines Lanzknechtes (1844–1845). He took part as an Austrian officer in the campaigns of Galicia 1846, Italy 1848 and Hungary 1848, and as an amateur in the French conquest of Algeria, the Carlist Wars in Spain and the Swiss civil war of the Sonderbund. He became a major-general in the Austrian army in 1849, and died after many years of well-filled leisure in 1870. The second son, Karl II Borromäus Philipp (1802–1858), was a Feldzeugmeister; the third, Edmund Leopold Friedrich (1803–73), a field marshal in the Austrian army. Of Schwarzenberg's nephews, Felix Schwarzenberg, the statesman, is separately noticed, and Friedrich Johann Josef Coelestin (1809–1885) was a cardinal and a prominent figure in papal and Austrian history.[6]

His successors lived in Orlík castle in Bohemia, and after the creation of Czechoslovakia were its citizens, speaking Czech. The present head of the family, Karel VII Schwarzenberg (*1937), lived abroad (Swiss citizen) during Czechoslovakia's communist period of 1948-1989. He supported Czechoslovakian political exiles and was president of the International Helsinki Federation for Human Rights in 1980s. He returned after the Velvet Revolution, was the chancellor from 1990-1992 during the Presidency of Václav Havel, and was elected a member of the Senate of the Czech Republic in 2004. Between 2007 and 2009, he served as the 6th Minister of the Foreign Affairs of the Czech Republic.[citation needed]