Flight Simulator X marks the tenth version of the popular line of flight simulators. It was officially released to the US market on October 17, 2006. According to Microsoft's Web site for the game, a standard edition features everything from navaids to GPS and airways. It also includes 18 planes, 28 detailed cities, and over 24,000 airports with a deluxe version featuring 24 aircraft, and 38 cities.

Flight Simulator X was officially unveiled at the 2006 International Consumer Electronics Show (CES) as a gaming showcase for Microsoft Windows Vista and is now also compatible with Windows 7. Microsoft released screenshots as well as a list of frequently asked questions as a press release on Microsoft Flight Simulator Insider,[2] and numerous flight simulator communities. This also included mission-based gameplay with mission specific aircraft as well as an upgraded rendering engine capable of increased detail. Following the Electronic Entertainment Expo (E3) in May 2006, Microsoft published new screenshots, videos and an official trailer. The overall reaction by the community was quite positive,[citation needed] and the graphical quality of the simulator has greatly increased.

On 22 January 2009, it was reported that development team behind the product was being heavily affected by Microsoft's ongoing job cuts, with indications that the entire Flight Simulator team would be laid off.[3][4] The news was later confirmed by Microsoft officials stating they were committed to the Flight Simulator franchise, with expectations to continue product releases in the series, but had nothing specific to announce at that time.[5] On 17 August 2010, Microsoft announced Microsoft Flight, a new simulation game that boasts a further improved graphics engine, and enhanced simulation features. [6]

A screenshot showing the Cessna 172 with G1000 cockpit flying in a multiplayer session. Note the Boeing 747 traffic and traffic readout on the right screen. FSX. 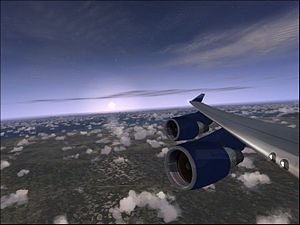 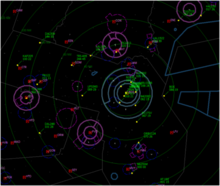 A screenshot of the FSX multiplayer radar crowded with airplanes.

Flight Simulator X was released in three editions: Standard, Deluxe, and later Gold. The Deluxe Edition incorporates additional features, including an on-disc software development kit (SDK), three airplanes with the Garmin G1000 Flightdeck, and the ability for the player to act as Air Traffic Control (ATC) for other online users with a radar screen.[7][dead link] 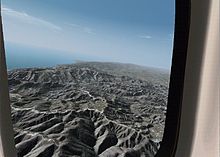 A screenshot demonstrating the high resolution terrain capacity of FSX. In this example, payware scenery is used.

The new features in Flight Simulator X include:

In a few missions, extra AI aircraft are included but aren't available to the player in Free Flight. These aircraft include:

FSX ships with several, fictional airlines. The only real airline is Kenmore Air. The airlines are as follows.

Any player aircraft may be used with the callsign of any of these airlines.

The inclusion of Missions adds a new facet to the simulation, adding task oriented goals, and encouraging users to fly worldwide, rather than just from their home field. Although a similar concept was available in previous versions, the new implementation of multipath & event oriented situations substantially extends the potential for user interaction.

Pilots earn Rewards for completing various missions, and reaching specific accomplishments throughout the game, (in 'Free Flight'). Some of the rewards exist as hidden "easter eggs" to be discovered by pilots.[12] Some missions have multiple and hidden rewards, receipt being dependent on performing additional actions.

Some hidden rewards include:

In each mission description, a map is included with it. It notes that they are for entertainment purposes. The maps and charts are supplied by Jeppesen.

This is a list of all missions in Flight Simulator X ( Standard, Deluxe Edition and Acceleration missions are included).

Artificial intelligence (AI) aircraft are non-playable aircraft built only for scenery and ambience. They sometimes also play a key role in missions. Three aircraft, the McDonnell Douglas MD-83, the Piper Cherokee and the DeHavilland Dash 8 have been supplied as AI only by Microsoft, but several addons from flightsim websites allow these aircraft to be flyable within the simulator.

Flight Simulator X is notable for being the first product in Microsoft's Flight Simulator series to have a game demo, which contains a subset of features of the retail product (including a limitation to the duration of a flight) and requires Windows XP Service Pack 2 or Windows Vista for installation.

The first limited demo of Flight Simulator X was released to the public on August 9, 2006, and put up for download on the website. Even though playable, the August demo represented a beta release of the product, and had a number of bugs, some of which were recognized in the official installation's README file. On October 2, 2006, the demo was superseded by a newer release, which, while having fewer bugs[citation needed], is almost identical to the first demo. The DHC-2 Beaver was removed in favor of a Learjet 45. Both the demos feature St. Maarten, Netherlands Antilles and the surrounding area only, as opposed to the entire world. The main airport featured is Princess Juliana International Airport. Current Demo Aircraft:

Microsoft released the first service pack (SP1) for Flight Simulator X on May 15, 2007 to address:

Microsoft released another service pack for Flight Simulator X about the same time as its expansion pack (below). The update is primarily for Vista users that have DirectX 10 (DX10) compatible graphics adapters. The DX10 version takes advantage of DX10's improved shader model and more pixel pipelines and increased performance for Vista, approaching overall FSX performance on XP. It also adds the capability for players who do not have the expansion pack to participate in multiplayer activities with users of the expansion pack, along with support for multi-core processors.[14][15] FSX-SP2 also fixes some more bugs over the original release of Flight Simulator X. SP1 is not compatible with SP2 or Acceleration in Multiplayer. People with SP1 cannot enter a session with players who have SP2 or Acceleration in Multiplayer. According to the documentation users are required to install service pack 1 before installing service pack 2.

Microsoft released their first expansion pack for Flight Simulator in years, called Flight Simulator X: Acceleration, to the US market on October 23, 2007 rated E - E10+ for mild violence, and released to the Australian market on November 1, 2007 rated G.[16] Acceleration introduces new features, including multiplayer air racing, new missions, and three all-new aircraft, the F/A-18A Hornet, EH-101 helicopter and the P-51D Mustang. In many product reviews, users complained of multiple bugs in the initial release of the pack. One of the bugs, that occurs only in the Standard Edition, is the Maule Air Orion aircraft used in the mission has missing gauges and other problems, as it is a Deluxe Version-only aircraft.

The new scenery enhancements cover Berlin, Istanbul, Cape Canaveral and the Edwards Air Force Base, providing high accuracy both in the underlying photo texture (60 cm/pix) and in the detail given to the 3D objects.

The expansion pack includes code from both service packs, thus installing them is unnecessary.[18][19]

A common criticism of FSX is its apparent requirement for very high performance hardware, and generally being more dependent on a computer with a higher CPU clock speed, with relatively poor utilization of mutliple processing cores. Furthermore, the original stated system requirements for the game are grossly inaccurate, with many users reporting poor performance on average home hardware.

Microsoft announced in early 2010 that there was currently a shortage of the game in retailers, after receiving complaints. They expressed that they had not stopped manufacturing the popular simulation game, but that there was currently a shortage of available product activation keys. As a result they needed to make an engineering change which resulted in reduced output. New copies of the game returned to shelves around May 2010.