A chādor or chādar (Persian: چادر‎) is an outer garment or open cloak worn by many Iranian women and female teenagers in public spaces. Wearing this garment is one possible way in which a Muslim woman can follow the Islamic dress code known as ḥijāb. A chador is a full-body-length semicircle of fabric that is split open down the front, with a head-hole in the top. This cloth is tossed over the woman's or girl's head, but then she holds it closed in the front. The chador has no hand openings, or any buttons, clasps, et cetera, but rather it is held closed by her hands or by wrapping the ends snugly around her waist.

Traditionally a light coloured or printed chador was worn with a headscarf (rousari), a blouse (pirahan), and a long skirt (damaan); or else a blouse & skirt or dress over pants (shalvar), and these styles continue to be worn by many rural Iranian women, in particular by older women. Historically in urban locations, the female's face was covered with a long, rectangular white veil (a ruband, see also called a niqab) extending down from immediately below her eyes. On the other hand, in Iran the chador does not require the wearing of a veil. Inside the home, particularly for urban women, both the chador and the veil have been discarded and there women and teenagers wore cooler and lighter garments; while in modern times, rural women continue to wear a light-weight printed chador inside the home over their clothing during their daily activities. The chador is more commonly worn by Shia (Shiite) Muslims. 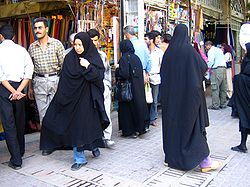 Before the modern revival of the chador, the color black was disdained for everyday wear because of its connotations concerning death and funerals. White or printed fabrics were preferred for everyday wear. Some women still prefer to wear happier, lighter colors. Contemporary older rural women have disdained the modern fashions, and some young women indulge in colored chadors.

During the reign of the Shah of Iran, such traditional Islamic clothing was largely discarded in favor of modestly worn Western clothing, such as the case in more Westernized countries like Algeria, Egypt, Iraq, Jordan, Kuwait, Lebanon, Morroco, Tunisia, and Turkey. However, in recent years, most of the women in those countries began to wear hijab again. In countries like Lebanon and Turkey, young women even wear bikinis and other such swimwear to the beaches and public swimming pools. Iran does in fact allow women to wear bikinis and other swimsuits as long as they are in the female section of a pool/beach, and some Iranian women do so.

Iranian women are not required to wear chadors. Many, if not most do so, as wearing for respectability and Islamic piety. However, other women also fulfill the government requirements by wearing a combination of a headscarf and a long overcoat which conceals her arms and legs. The overcoat is known by a French word, manteau. Some women wearing manteaus would also wear them for religious reasons. Wearing of chadors often depends on where the person was raised, for example in liberal North Tehran, chador wearing is uncommon, while in conservative Southern Tehran, the overwhelming majority of women wear chadors.

Like the hijab, the chador has become popular among women in Islamist movements wishing to visibly identify themselves as Muslims and as an assertion of dignity and Islamic culture.[1]

The History of Iranian women's clothing

Fadwa El Guindi, in her book on the history of hijab, locates the origin of the Persian custom in ancient Mesopotamia, where respectable women veiled, and servants and prostitutes were forbidden to do so. The veil marked class status, and this dress code was regulated by sumptuary laws.

This custom seems to have been adopted by the Persian Achaemenid rulers, who are said by the Graeco-Roman historian Plutarch to have hidden their wives and concubines from the public gaze.

The barbarous nations, and amongst them the Persians especially, are extremely jealous, severe, and suspicious about their women, not only their wives (hai gamētai), but also their bought slaves and concubines (pallakai), whom they keep so strictly that no one sees them abroad; they spend their lives shut up within doors (oikoi) and when they take a journey, are carried in closed tents, curtained on all sides, and set upon a wagon (harmamaxai).[2]

Note, however, that the wives are hidden in wagons and litters, that is, by purdah, not by chadors. There is no pictorial evidence for the chador before Islamic times. Wolfgang Bruhn and Max Tilke, in their 1941 A Pictorial History of Costume, do show a drawing, said to be copied from an Achaemenid relief of the 5th century BCE, of a woman with her lower face hidden by a long cloth wrapped around her head. This is evidence of veiling, but not of a chador.[3]

It is likely that the custom of veiling continued through the Seleucid, Parthian, and Sassanid periods, though there is little in the way of pictorial evidence for this. Upper-class Greek and Byzantine women were also secluded from the public gaze. El-Guindi believes that the Islamic hijab is a continuation of this ancient Mediterranean and Middle Eastern custom. Muslim women were to be veiled or secluded because it marked them as respectable, see Sex segregation and Islam.

It is not clear when the chador took the form in which it is currently known. European visitors of the 18th and 19th centuries have left pictorial records of women wearing the chador and the long white veil, but it is likely that the garment was worn long before that.

The 20th century Pahlavi ruler Reza Shah banned the chador and all hijab in 1936, as incompatible with his modernizing ambitions. According to Mir-Hosseini as cited by El-Guindi, "the police were arresting women who wore the veil and forcibly removing it." This policy outraged the Shi'a clerics, and ordinary men and women, to whom "appearing in public without their cover was tantamount to nakedness." Many women refused to leave the house in fear of being assaulted by Reza Shah's police. However, she continues, "this move was welcomed by Westernized and upperclass men and women, who saw it in liberal terms as a first step in granting women their rights." However, for regular, non-activist women, it amounted to torture and desecration of their religion and themselves. A few even committed suicide.[4]

Eventually rules of dress code were relaxed, and after Reza Shah's abdication in 1941 the compulsory element in the policy of unveiling was abandoned, though the policy remained intact throughout the Pahlavi era. According to Mir-Hosseini, 'between 1941 and 1979 wearing hejab [hijab] was no longer an offence, but it was a real hindrance to climbing the social ladder, a badge of backwardness and a marker of class. A headscarf, let alone the chador, prejudiced the chances of advancement in work and society not only of working women but also of men, who were increasingly expected to appear with their wives at social functions. Fashionable hotels and restaurants sometimes even refused to admit women with chador, schools and universities actively discouraged the chador, although the headscarf was tolerated. It was common to see girls from traditional families, who had to leave home with the chador, arriving at school without it and then putting it on again on the way home'.[5]

Beginning in 1980, a year after the revolution, the new government of Iran began to enforce wearing of hijab, but not the niqab (face veil). Iranian morality police enforced the hijab laws. The code was enforced most strictly in the years immediately following the revolution. With the cooling of revolutionary enthusiasm and increasing popular disenchantment with the theocratic regime, the rules of hijab have been largely eroded, in many ways only being a technicality among some women, who wear headscarves so far back on their heads it barely covers it, and often combined with makeup.