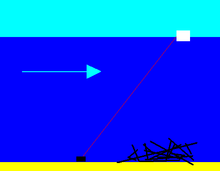 Diagram of a diving shot upcurrent of a dive site

A diving shot is an item of diving equipment consisting of a weight, a line and a buoy. The weight is dropped on the dive site. The line connects the weight and the buoy and is used by divers to move between the surface and the dive site more safely and more easily.

The shot has several purposes. The line is useful for divers in conditions of low visibility or strong tides where underwater navigation between the surface and the dive site is difficult or on deep dives where a navigation error would dramatically reduce useful underwater time.[1] Divers can use the line to help buoyancy control, to ease long decompression stops and to prevent drift when ascending in a current. 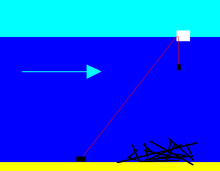 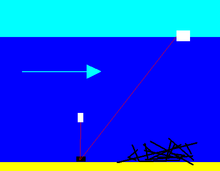 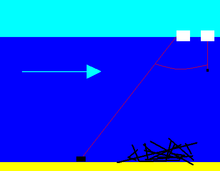 Diagram of a lazy diving shot attached to another shot

Typically the weight is lead and weighs around 20 kg (44 lb). To prevent the assembly sinking and being lost, the buoy should provide more buoyancy than is required to make the complete system float. For example, if a 20 kg/44 lb weight is used, the buoy must provide more than 20 kg buoyancy: it needs to be at least 20 litres/4.4 gallons in volume.

The line should be longer than the depth of the dive site and at least 10 mm (0.4 inch) in diameter. A thick line is used because the shot weight is often lifted by pulling the line by hand and the pressure of a thin line causes pain and damage to the skin and the hands.

Floating line, such as polypropylene, although cheap, can foul the propellers of boats if it is allowed to accumulate near the surface. There are several ways of avoiding this:

A "lazy shot" is a second shot which is connected to the first shot at a depth deeper than the deepest decompression stop. It is used for decompression and frees the main shot for other divers. The lazy shot's line does not need to be longer than the decompression depth and it only needs a weight heavy enough to provide diver buoyancy control.[2]

The shot is deployed, generally from a boat, after the dive site is located using position fixing such as GPS and an echo sounder.

In a current, the buoy may be dragged under the surface by water resistance of the divers holding the line as they ascend and reach shallow water. If this happens divers will not want to descend with the buoy and will prefer to release the shot line and be swept away from the shot. In strong currents divers often decompress on decompression buoys instead of using a shot.

Sometimes, a lifting bag is attached to the weight and used to help raise the weight at the end of the dive.