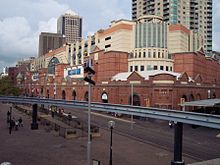 Opera House Market. The Market, which has been running for over 12 years, has up to 40 stalls with Australian made products including art and craft works, jewellery, paintings, fragrances, clothing and souvenirs. The market has now closed due to renovations.

Paddy's Market. Paddy's Markets are located at Haymarket (near Chinatown) and as part of Sydney Markets at Flemington (near Sydney Olympic Park). The markets cater for both locals and tourists and is home to over 1,000 stalls that sell almost everything from fashion and accessories, sporting goods, fresh fruit and vegetables, pets supplies, clothing, electrical goods to arts and crafts and souvenirs.

The Rocks Market. Located at the north end of George Street, nestled in the heart of The Rocks and under the shadow of the Sydney Harbour Bridge is The Rocks Market, which has a distinctive amount of arts and crafts. It has recently been expanded to include a large weekend market and a farmers market (Friday nights, Saturdays and Sundays). 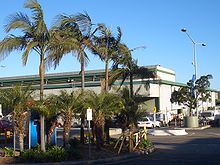 Balmain Markets are located in the grounds of St Andrews church every Saturday, on the corner of Darling and Curtis Road, Balmain.[1]

Bondi Markets are open every Sunday in the grounds of Bondi Beach Public School at Bondi Beach.[2]

Bundeena Markets are held on the first Sunday of every month at Horderns Reserve Bundeena in the south of Sydney.[3]

Centennial Park Markets are held on the fourth Sunday of every month at Centennial Parklands, Oxford Street, Woollahra in Sydney.

Glebe Markets can be found at Glebe Public School each Saturday in Glebe Point Road, Glebe.

Kirribilli General Market is held on the fourth Saturday of the month from January to November, and on the first and third Saturdays of December at Bradfield Park, on the corner of Alfred St and Burton St, Milsons Point, just outside Milsons Point Station.[4]

Manly Village Public School Markets are held on the third Saturday of every month in the grounds of the school on the corner of Darley Road and Wentworth Street, Manly.

Manly Markets are held every Saturday and Sunday just off Manly Corso at Sydney Road, Manly.[6]

Mona Vale Twilight Markets are held on the first Friday of the month during March, April, September, October and December at Village Park, Park Street, Mona Vale from 5pm-9pm. Bring a picnic rung, enjoy tasty food and listen to live music. There's a jumping castle for the kids too! [7]

Narrabeen Markets are held on the third Sunday of every month in the grounds of [Berry Reserve] off Pittwater Road near Wakehurst Parkway, Manly.[8]

Newtown Designers Markets were found at the Newtown Neighbourhood Centre on the third Sunday of each month from 9am until 3pm featuring handmade designer products, Newtown. (Closed May 2009)[9]

North Rocks Markets are held every Sunday morning at North Rocks Institute for deaf and blind children 361-365 North Rocks Road. An eclectic mix of old and new with many secondhand stalls ranging from antiques to clothing and toys. There is a very good coffee stall, bakery stall and generally a great mix of second hand items to choose from. The markets are run by the local Rotary club and a coin donation is expected upon entry with all proceeds going to charity.

North Sydney Markets are held on the second Saturday of each month in Civic Park, North Sydney. The market has over 120 stalls including original art, handmade jewellery, second hand clothes and accessories, CDs and books, bric-a-brac, honeys and jams as well as food on site and live music. [10]

Northside Produce Markets are held on the third Saturday of each month in Civic Park, North Sydney. The market is home to a wide variety of fresh produce including organic meat and vegetables, artisan cheeses, sourdough and spelt breads, fresh pasta, seafood, smallgoods, cider, wine and coffee. At the SMH Good Food Shopping Guide Awards 2011 the Northside Produce Market won the award for Best Market.[11]

Paddington Market are in the grounds of the historical Paddington Uniting Church on Oxford Street, Paddington. Up to 250 stalls of bustle and vibrancy, selling everything from clothes, art works, bric-a-brac, books, jewellery, pottery, fragrances and produce.[12]

Palm Beach Market 2011 Markets will be held on Sundays 27 March, 24 April, 22 May, 25 September, 23 October and 11 December. They run from 9am until 3pm at Governor Phillip Park, Barrenjoey Road Palm Beach (next to Dunes Restaurant). Browse stalls for unique gifts, fashion, jewellery and homewares.[13]

Riverside Market is held on the second Saturday of the month at Riverside Girls High School, corner of Victor Road and Huntleys Point Road at Huntleys Point (next to the Gladesville Bridge).

South Sydney Industrial Markets are at 75-85 O'Riordan Street, Alexandria and open every Sunday 10am - 3pm bringing the community together at Alexandria's industrial park.

Surry Hills Markets are held in Shannon Reserve, on the first Saturday of every month, at the corner of Crown and Collins Streets, Surry Hills.[16]

The Sydney Markets are in the western suburb of Flemington. The market has a wholesale sales section that caters to larger business and general sales to the public. The market is the central marketplace for Sydney farmers to sell their products. Sydney Markets feature a number of divisions including produce, flowers, growers, fresh food, motor, swap & sell, Paddy's Markets and Sydney Markets Plaza.[17]