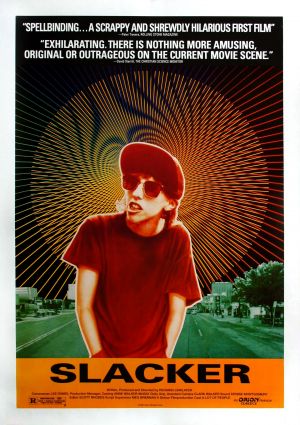 "Slacker" (1991) is an influential American written and directed by , who also appears in the film. "Slacker" was nominated for the Grand Jury Prize - Dramatic at the in 1991.

"Slacker" is a uniquely-structured and seemingly plotless film, following a single day in the life of an ensemble of mostly twenty-something bohemians and misfits in Austin. The film follows various characters and scenes, never staying with one character or conversation for more than a few minutes before picking up someone else in the scene and following them. The characters include Linklater as a miscreant who just steps off a bus, a UFO buff who insists the U.S. has been on the since the 1950s, a JFK conspiracy theorist, an elderly who befriends a man trying to burglarize his house, a serial collector and a woman trying to sell a Madonna . The woman selling the pap smear appears on the movie poster, and was played by drummer . [ [http://www.salon.com/ent/movies/feature/2006/07/05/slacker/index2.html Slackers: 15 Years Later] ]

The movie was released to worldwide on . A two-disc Criterion Collection boxed-set edition was released on , in the USA and Canada only. The set has many "extras", including a book on the film and Linklater's first feature film, "", on DVD for the first time. A different book (also titled "Slacker") containing the screenplay, interviews, and writing about the film was published by in 1992.

The release of the film is often taken as a starting point (along with the earlier "") for the independent film movement of the 1990s. Many of the independent filmmakers of that period credit the film with inspiring or opening doors for them, perhaps most famously , who has said on numerous occasions that the film was the inspiration for "" The movie also popularized the use of "" to describe "a person regarded as one of a large group or generation of young people (especially in the early to mid 1990s) characterized by apathy, aimlessness, and lack of ambition". [ [http://dictionary.oed.com/cgi/entry/50226892?query_type=word&queryword=slacker&first=1&max_to_show=10&single=1&sort_type=alpha Definition] ] Linklater, however, has said that he wanted the word to have positive connotations.