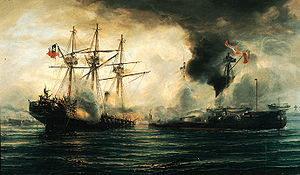 The term combat (French for fight) typically refers to armed conflict between military forces in warfare, whereas the more general term "fighting" can refer to any violent conflict between individuals or nations. Combat violence can be unilateral, whereas fighting implies at least a defensive reaction. However, the terms are often used synonymously along with the term "Battle Ready". A large-scale fight is known as a battle.

Combat may take place under a certain set of rules or be unregulated. Examples of rules include the Geneva Conventions (covering the treatment of soldiers in war), medieval Chivalry, the Marquess of Queensberry rules (covering boxing) and several forms of combat sports.

Combat in warfare involves two or more opposing military organizations, usually fighting for nations at war (although guerrilla warfare and suppression of insurgencies can fall outside this definition). Warfare falls under the laws of war, which govern its purposes and conduct, and protect the rights of soldiers and non-combatants.

Combat may be armed (using weapons), or unarmed (not using weapons). Hand-to-hand combat (melee) is combat at very close range, attacking the opponent with the body (striking, kicking, strangling, etc.) and/or with a melee weapon (knives, swords, batons, etc.), as opposed to a ranged weapon.

Hand-to-hand combat can be further divided into three sections depending on the distance and positioning of the combatants:

Certain speech act structures related to verbal and also physical exchanges are extant in ancient times as well as today.[1] Fixed speech act patterns employed in a verbal exchange are a phenomenon found in historical and modern texts alike. Although conventions change over time and from one culture to the other, ritualised exchanges seem to be part of the basic inventory of language usage, and so it is quite common to find similarities between the way individuals from various cultures engage in a verbal duel. Verbal combat may result in physical combat after a certain extent.