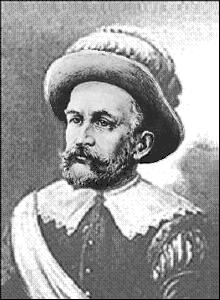 Peter Minuit (1589 &ndash; , ) was a Walloon from , today , , then part of the . He was the Director-General of the Dutch colony of from 1626 until 1633 and founder of the Swedish colony of in 1638. According to tradition, he purchased the island of from the Canarsee Native Americans on , . However, the Canarsee were actually native to Brooklyn, while Manhattan was home instead to the , an indian tribe who were not pleased by the exchange and later battled the Dutch in . [cite book |last=Loewen |first=James W. |authorlink=James Loewen |title=Lies My Teacher Told Me: Everything Your American History Textbook Got Wrong |year=1995 |publisher= |location= |isbn=1-56584-100-x ]

Peter himself was born in a time of great upheavals and struggles by Protestants against Catholics, which culminated in the . It finally led to the a century later (1648) and would leave much of Germany devastated, though Rhine-Westphalia less than most of it. The neighboring Dutch Republic would briefly emerge as the dominant force in Europe.

Minuit's Walloon family, originally from the city of , was one of many Protestant families that fled persecution from the government of the . In 1581, at the height of the that split the Netherlands in a Catholic South and a Protestant North, Minuit's father found refuge in the city of that had become a haven for Protestants as early as 1540. In the early decades of the next century the Duchy of Cleves was embroiled in a war of succession -an early phase of the Thirty Years' War-, while the neighboring northern provinces of the Netherlands were now an increasingly wealthy Protestant Republic. The exact reasons for Minuit's decision to leave Wesel are unclear but there are indications that he moved to Utrecht.

Minuit was appointed the third director-general of New Netherland by the , in December 1625, and arrived in the colony on , .

The legendary purchase of Manhattan

On , , he was credited with the purchase of the island from the natives — perhaps from a band of known as the "Canarsee" [ans often referred to the native inhabitants simply by the place name for the larger area: "Canarsee", in this case.] — in exchange for trade goods valued at 60 guilders. This figure is known from a letter by a member of the board of the Dutch West India Company to the States-General in 1626.60 guilders in 1626 had the approximate value of $1000 now. [ [http://teachpol.tcnj.edu/amer_pol_hist/fi/00000002.htm Letter of 1626 stating that Manhattan Island had been purchased for the value of 60 guilders] , . Accessed , . The 60 guilders have been traditionally converted to about $24. Of course, this is a mistake, as 60 guilders in 1626 had a much higher value. The website of the International Institute for Social History, Amsterdam ( [http://www.iisg.nl/hpw/calculate.php ] ) calculates its value as 60 guilders (1626) = Euro 678.91 (2006) , equal to about 1000 dollars. One might speculate that the confusion arose in the following way by making three errors. Error 1: A , a Dutch coin - only introduced in the 18th century - is worth 2.5 guilders (50 "stuivers" = 50 x 0.05 guilders = 2.5 guilders, so that 60 guilders would have the same value as 24 "rijksdaalders". Error 2 and 3: If one then mistakenly equates a "rijksdaalder" with a "daalder" (30 "stuivers" = 30 x 0.05 guilders = 1.5 guilders) and a "daalder" with a dollar ("" reminds one of ), one gets "60 guilders = $24".] In 1846 the figure of Fl 60 (60 guilders or florins) was converted by a New York historian to $24, and "a variable-rate myth being a contradiction in terms, the purchase price remains forever frozen at twenty-four dollars," as Edwin Burrows and Mike Wallace remarked: [The of New York is treated in Edwin G. Burrows and Mike Wallace, "Gotham: A History of New York City to 1898" (1999:xivff).] a further embellishment in 1877 converted the figure into "beads, buttons and other trinkets." A contemporary purchase of rights in , to which Minuit was also party, involved duffel cloth, iron kettles and axe heads, hoes, , drilling awls, "s," and "diverse other wares". "If similar trade goods were involved in the Manhattan arrangement," Burrows and Wallace surmise, "then the Dutch were engaged in high-end technology transfer, handing over equipment of enormous usefulness in tasks ranging from clearing land to drilling ." If the island was purchased from the Canarsees, they would have been living on and maybe passing through on a hunting trip. The "purchase" was understood differently by both parties, the local group having no conception of alienable real estate, as is always pointed out in modern accounts of the supposed transaction.

In 1631, Minuit was suspended from his post, and he returned to Europe in August 1632 to explain his actions, but was dismissed.

His friend, who had also been disappointed by the Dutch West Indian Company, drew Minuit’s attention to the Swedish efforts to found a colony. In 1636 or 1637, Minuit made arrangements with and the Swedish government to create the first Finno-Swedish colony in the . Located on the lower at what is now , within the territory earlier claimed by the Dutch, it was called , with the Swedes (and Finns) landing there in the spring of 1638. Minuit finished Fort Christiana that year, then departed to return to for a second load of colonists, and made a side trip to the to pick up a shipment of for resale in to make the voyage profitable. Minuit died while on this voyage during a hurricane at St. Christopher in the Caribbean.

The official duties of the governorship were carried out by the Finnish Lieutenant (raised to the rank of Captain) , until the next governor was chosen and brought in from the mainland Sweden, two years later.

Peter Minuit is commemorated by Peter Minuit Plaza, a small park at the foot of , ; by a marker in at the site of the actual purchase; by a granite flagstaff base in , which shows the historical purchase; the Peter Minuit Chapter of the ; and also by a memorial on Moltkestraße in ().