Infanta María Luisa Fernanda of Spain (30 January 1832 – 2 February 1897) was Infanta of Spain and Duchess of Montpensier. She was the youngest daughter of king Ferdinand VII of Spain and his fourth wife Maria Christina of the Two Sicilies, the queen-regent, who was also his niece. 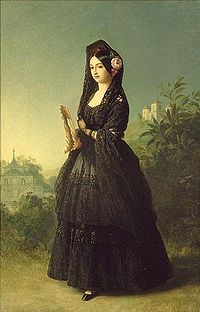 When her elder sister Isabella II of Spain succeeded to the throne, Infanta Luisa Fernanda was heiress-presumptive to the crown between 1833 and 1851, when Isabella's oldest surviving daughter was born.

Isabella had been engaged to their first cousin Francis, Duke of Cádiz, who was known to be homosexual and rumored impotent. Their kinsman, king Louis Philippe of France calculated that no children would be born from Isabella's marriage, and planned the crown of Spain to eventually devolve to his own grandchildren. For this purpose, Luisa Fernanda was engaged to Antoine, Duke of Montpensier (1824–90), the youngest son of king Louis Philippe, who also was Luisa's mother's first cousin.

Luisa Fernanda, only 14 years old, and Duke Antoine, 22, had their nuptials on 10 October 1846 as a double wedding with Isabella and Francis', and young Antoine was elevated to the rank of an Infante of Spain. The couple moved to Paris and later to Sevilla.

The relationship between Isabella and her sister was tense, due to Antoine's conspiracies against the queen.[1]

Antoine's father was deposed in 1848. The same year, the then 16-year-old Luisa Fernanda gave birth to their first child, Maria Isabel. After Isabella was deposed, the family went to exile. Luisa returned to Sevilla years later, already widowed, where she died.[1] She is buried at Escorial. 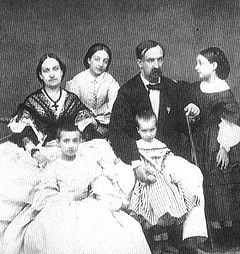 Luisa Fernanda and Antoine had nine children, but only five reached adulthood.[2] 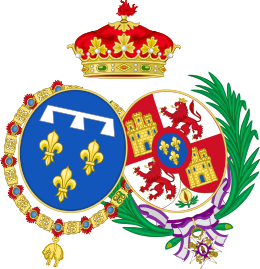 Arms of alliance of Infanta Luisa Fernanda and her husband.