She is a member of the Indian National Congress (INC), was nominated for the presidency by the ruling United Progressive Alliance and Indian Left.

Pratibha Devisingh Patil was born in Jalgaon District, Maharashtra. She received her early education from RR Vidyalaya, Jalgaon and later completed her Master studies in Political Science and Economics at the Moolji Jaitha College, Jalgaon. She obtained the degree of Bachelor of Laws from Government Law College, Mumbai.[1] She took part in sports and won several shields at various inter-collegiate tournaments. Even as a MLA, she pursued her studies as a law student.[citation needed]

Pratibha Patil started her professional career[when?] as a practising lawyer at the Jalgaon District Court and worked on various social activities, especially, for the upliftment of poor women.[citation needed]

She was elected for the Jalgaon Assembly constituency when aged 27.[citation needed] She was elected four times consecutively for Muktainagar (formerly Edlabad), Maharashtra, as a member of the Maharashtra Legislative Assembly between 1962 and 1985.[1] Thereafter, she served as a Member of Parliament in the Rajya Sabha from 1985 to 1990. In 1991 she was elected as a Member of Parliament in the tenth Lok Sabha, representing the Amravati constituency and stayed in the role until 1996.[1] She has the distinction of not having lost a single election that she contested to date.[citation needed]

She was the 24th Governor of Rajasthan between 2004–2007,[1] and the first woman to hold that office.[citation needed]

On 14 June 2007, United Progressive Alliance (UPA), the ruling alliance of political parties in India headed by the Indian National Congress, and the Indian left nominated her as their candidate for the Presidential Election to be held in July that year.[5] She emerged as a compromise candidate after the Left parties would not agree to the nomination of former Home Minister Shivraj Patil. UPA chairwoman Sonia Gandhi proposed her: her loyalty to the Nehru-Gandhi family was widely perceived to be a major factor in her nomination.[6] With the possibility that she might become the first female President of India, Sonia Gandhi described her nomination as a "historic occasion".[citation needed]

Before leaving Jaipur for New Delhi, she thanked Gandhi for choosing her and said that her first job as president would be to make the National Rural Employment Guarantee Act (NREGA) started by UPA a success.[7] In Delhi she asserted that she would not be a rubber stamp president.[6]

The Leader of the Opposition, L K Advani, unsuccessfully sought the intervention of Election Commission of India to force Patil to declare her assets.[clarification needed][9]

Shiv Sena, an important ally of NDA, declared its support of Patil on the grounds that she would be the first Maharashtrian to hold the office. This decision caused problems for the BJP-Sena alliance.[10][clarification needed]

She won the presidential election held on 19 July 2007 defeating her nearest rival Bhairon Singh Shekhawat by over 300,000 votes. She took office as India's first woman president on 25 July 2007.

Along with her husband, she set up Vidya Bharati Shikshan Prasarak Mandal, an educational institute which runs a chain of schools and colleges in Amravati, Jalgaon and Mumbai.[11] She also set up Shram Sadhana Trust, which runs hostels for working women in New Delhi, Mumbai and Pune; and an engineering college in Jalgaon.[11] She also founded a cooperative sugar factory known as Sant Muktabai Sahakari Sakhar Karkhana,muktainager and a cooperative bank named after herself as Pratibha Mahila Sahakari Bank. The bank ceased trading in February 2003 due to having its license revoked as a consequence of financial irregularities.[12]

The Bharatiya Janata Party (BJP) have opposed her[why?] in its political campaigning. BJP leader Arun Shourie wrote two articles published as a booklet titled Does This Tainted Person Deserve to Become President of India?,[13] and another BJP leader, Arun Jaitley, announced[when?] the launch of a website called Know Pratibha Patil, which contains various media reports and documents concerning the alleged questionable financial dealings of both Patil and her family.[14]

While the BJP tried to build a strong moral opposition to her nomination as president in 2007, it was advised not to challenge the nomination on legal grounds.[clarification needed][15] However, the BJP's National Democratic Alliance ally the Shiv Sena supported her nomination for president on the grounds that she was from Maharashtra.

A Public Interest Litigation was filed before the Supreme Court of India challenging her 2007 presidential nomination. The claim was referred to the various allegations against Patil and her family members and sought the cancellation of her nomination papers on the constitutional grounds of her being an undischarged bankrupt who had not cleared a debt to the public exchequer and others.[16][17]

The court ruled that it could not act on unsubstantiated allegations, and rejected the petition as being without merit at the admission stage.[18][19] Furthermore, it queried the intention of the petitioner and said that it was more of a "private interest litigation".[20] The court ruled:

In another case a Delhi-based NGO has also filed a petition[when?] before the Delhi High Court alleging that Patil being Managing Trustee of Mumbai-based Shram Sadhana Bombay Trust, which is under the control of state government, was holding the office of profit making her ineligible to contest the President's election.[22] The High Court deferred the hearing until after election.[clarification needed]

The leaders of Indian National Congress and Indian left tried to repudiate these charges.[23] They have also said that these issues have never been raised in the past while she was a deputy chairwoman of the Rajya Sabha, or during her tenure as a governor. They accused the BJP of launching a "malicious, unsubstantiated and deliberate" slanderous campaign just to damage her reputation.[24][25][26] Prime Minister Manmohan Singh defended Pratibha Patil and dismissed the charges as "mud-slinging".[27] On Monday 2 July 2007 breaking her silence Patil described the allegations leveled against her as "false, malicious and baseless".[28]

Prominent and controversial allegations against her are:

Allegations of shielding her brother on a murder charge

On 22 June 2007, Rajni Patil, a professor at a Jalgaon college, claimed that Pratibha Patil's brother G.N.Patil was the person who had murdered her husband, Jalgaon congressman Vishram G Patil. She accused Pratibha Patil of shielding her brother. She further said that she had provided details of her allegations to Sonia Gandhi and President Dr A P J Abdul Kalam. Copies of her letter to the President were distributed to the press by Sudheendra Kulkarni, an aide of Leader of the Opposition L. K. Advani.[29][30]

On 13 July 2007 Rajani Patil petitioned the Bombay High Court, demanding that the Central Bureau of Investigation (CBI) investigate Pratibha Patil and her brother in connection with the allegations before the presidential election. The court directed the CBI accordingly in order to remove the possibility that presidential immunity might come into play if Prabitha Patil were elected.[31][clarification needed]

The lawyer Mahesh Jethmalani said that two CDs have surfaced which contain incriminating material against Patil's brother. The CDs contain footage of the elections for the district Congress presidentship in Jalgaon. Jethmalani offered to place both CDs on record, saying "These contain vital information showing the political link behind the murder."[32]

Pratibha Mahila Sahakari Bank was a cooperative bank set up by Patil in 1973 to empower women.[citation needed] The license for it to operate as a bank was revoked in 2003 by the Reserve Bank of India for alleged financial irregularities. Among the irregularities listed were the loans policy of the bank and loan interest waivers given, among others, to Patil's relatives.[33] Patil was one of the chairpersons of the bank and a number of her relatives were also directors.[citation needed]

She is currently[when?] one of 34 respondents in a legal case at the Bombay High Court relating to allegations of mismanagement of the bank and misappropriation of funds by its directors.[34][35]

In her defence, her supporters point out that she was not the founding president[36] of the bank, and that she held the job of the chairwoman for a little over a month.[37] They also point out that the RBI has never mentioned Patil's name in the report, and the court has not charge-sheeted her.[38] Communist leader A.B. Bardhan cast doubts on the credibility of the official employees' union of the bank, which has been highlighting the issue of mismanagement since 2002, drawing attention to the fact that it is associated with the BMS union led by the BJP.[38]

A cooperative sugar factory – Sant Muktabai Sahakari Sakhar Karkhana – of which Pratibha was a founder member, was declared a defaulter for failing to repay a Rs 17.5 crore (Rs 175 million) bank loan.[39] Pratibha Patil had been its chairwoman and director until she became the Governor of Rajasthan.[40] The loan was taken in 1994 when Pratibha was its chairwoman, but the factory has failed to repay the full amount. The bank sealed the factory on 23 January 2007 after issuing many reminders. This was the second occasion the mill had been sealed. Earlier, it was sealed in January 2006, but was reopened after the board of directors headed by G. N. Patil – younger brother of Pratibha Patil – requested for an opportunity to improve the performance of the mill.[41]

In 2002 the chief commissioner of central excise and customs, Pune, issued notice to the factory for evading excise duty resulting from diversion of export-oriented sugar by the factory into domestic market.

Dubbing as "malign campaign" the allegations, Union Agriculture Minister Sharad Pawar, defended Pratibha and noted that there was never any enquiry under Maharashtra Cooperative Societies Act against her. He also pointed out that as many as 74 mills were issued notices in December 2006, and it was "unfortunate that only one particular case has been brought up in the media". Pawar said most of the mills had failed to repay the loans because of persistent drought affecting sugarcane production, leading these mills to go sick.[42]

Nevertheless in 2007, Manohar Lal Sharma, an independent advocate, filed a public interest litigation petition in the Supreme Court alleging that Mrs Pratibha Patil was an undischarged insolvent relating to the Sant Muktabai Sugar Factory and hence disqualified to remain in the office of the presidency.[43]

In February 2011, Rajasthan state minister Amin Khan addressing a meeting of the district INC party was quoted by the local media[44] as saying Pratibha Patil was rewarded with the presidency because "she used to make tea and cook food at Indira Gandhi's residence" without expecting anything in return.[45] Khan later said that he was misquoted and did not mean any disrespect, and resigned from his post over the controversy.[46]

It was alleged that as a Member of Parliament for Amravati between 1991 and 1996 Patil diverted Rs 36 lakh (Rs 3.6 million) from her MPLADS fund to a trust run by her husband Devisingh Shekhawat. This was in violation of Government rules which barred MPs from providing funds to organisation run by their relatives.[47][48][clarification needed]

On 10 December 1975, when she was the Health Minister of Maharashtra, Patil advocated in Maharashtra Assembly that people with hereditary diseases should be compulsorily sterilised.[49][clarification needed]

Patil claims to have spoken to the spirit of the deceased leader Baba Lekhraj[50] at their[who?] headquarters in Mount Abu, Rajasthan.[50]

"Dadiji ke shareer mein baba aye... Maine unse baat ki" (Baba entered Devi’s body and he communicated to me through her).[51] Reporters began to report on the message she received of a "divine indication" of great responsibility coming her way.[52] 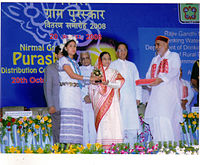