The Orange Line, is a rapid transit line in Chicago, Illinois run by the Chicago Transit Authority as part of the 'L' system. It is approximately 12.5 miles (20.1 km) long, and runs below grade and elevated on existing railroad embankments and new concrete and steel structures from Chicago Midway International Airport, the Southwest Side and downtown Chicago. The Orange Line has an average weekday ridership of 55,787 as of October 2009.[1]

Northward view from the Adams/Wabash station at night

Brown line and Orange line trains contend for the intersection at the southeast corner of the Chicago Loop. Photograph taken from the crossover walkway of the Adams/Wabash stop on the Green, Orange, Brown and Purple lines.

Chicago Transit Authority control tower 18 guides elevated Chicago 'L' north and southbound Purple and Brown lines intersecting with east and westbound Pink and Green lines and the looping Orange line above the Wells and Lake street intersection in the loop.

From Midway Terminal (4600 W. - 5900 S.), the Orange Line begins in an open cut near Midway Airport and then rises to elevated structure at 55th Street and continues northeast towards the city on railroad right-of-way. At Lawndale Avenue the line turns east along Conrail right-of-way at 49th Street to a point east of Western Boulevard, then curves north and northwest on embankment structure along CSX and Conrail right-of-way to Western Boulevard and Pershing Road.

From here, the line rises on elevated structure again and makes a sweeping curve to cross Archer Avenue, the Conrail tracks and Western Boulevard before descending onto Illinois Central (ex-Gulf, Mobile and Ohio) Railroad right-of-way immediately east of Western Boulevard. Entering the IC right-of-way, the line again changes from elevated structure to embankment. The line continues on embankment to Ashland Avenue where it crosses the South Fork of the South Branch of the Chicago River. At this point, the line enters the joint Illinois Central and Atchison, Topeka and Santa Fe Railroad right-of-way continuing on embankment to Canal Street.

There the line would again transition from embankment to elevated structure to bridge Canal Street, Cermak Road and the Chicago & Western Indiana Railroad tracks then curves east to run along the south side of 18th Street, crossing over the Red Line and Metra's Rock Island District tracks near Wentworth Avenue, before joining the other CTA 'L' lines immediately east of State Street, with the northbound track flying over the double track South Side Elevated. The ballasted track ends and the timber deck begins here. Orange Line trains share trackage with Green Line trains operating from the connection at 17th Street to the Loop.

Orange Line trains operate around the Loop 'L' clockwise on the Inner track via Van Buren-Wells-Lake-Wabash serving all Loop stations before returning to the Southwest Side.

Along the Orange Line's main route there are seven stations. An eighth station is located at Roosevelt/Wabash on the old South Side 'L' which Orange Line trains share with Green Line trains. A passenger tunnel connects this station with the Roosevelt/State subway station on the Red Line.

A downtown superstation has been proposed to provide express service from the Loop to O'Hare and Midway, via the Orange and Blue Lines. The station would provide services such as baggage check. The downtown terminal is under construction, but the express tracks required for the Airport Express trains have yet to be funded.

The Orange Line is operated only with Morrison-Knudsen-built 3200-Series rail cars which were delivered a year before the opening of the route. Trains generally operate in 8-car consists during the peak periods, and 4-cars during other times of the day except for special events when 8-car trains may be required. 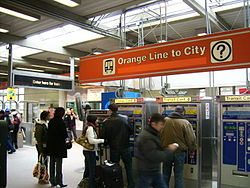 The Orange Line was opened on October 31, 1993, and was the first all-new service in Chicago since the Dan Ryan Line opened in September 1969, and the first extension to the CTA system since the O'Hare Airport Extension of the Blue Line in September 1984. But its planning dates back to the late 1930s when the City of Chicago proposed a high speed subway extension along Wells-Archer-Cicero between the Loop and 63rd Street and Cicero Avenue near Chicago Midway International Airport (then called Chicago's Municipal Airport). It would be another four decades before Chicago transit planners would become serious about providing rapid transit service to this area of the city.

In 1979, the City began the Southwest Transit Project, which proposed extending the CTA 'L' system to the Southwest Side of Chicago over existing railroad rights-of-way and newer elevated connections along the very busy Archer-49th-Cicero Corridor from the Loop to its originally planned terminus at Ford City Shopping Center. Funding for the project was made possible from Interstate Highway Transfer monies saved after the city decided to cancel the high priced and controversial Crosstown Expressway and Franklin Street Subway projects. Federal funding for the project was secured by U.S. Representative William Lipinski as a favor from then-President Ronald Reagan, who wanted to thank Lipinski for his vote to provide aid to the Nicaraguan contras.[2]

In 1985, construction of the $510 million transit line began and continued until fall 1993. When the Midway Line opened, the CTA decided to adopt a color-coded naming system for the rapid transit network (like Boston, Washington D.C., Cleveland) and named it the Orange Line.

Destination blinds on CTA trains have another destination sign for the Orange Line: Ford City.[3] The Ford City Mall is about two miles (3 km) south of Midway Airport, and it was originally planned to be the line's terminus. However, because of financial shortfalls, the City decided to end the line at Midway Airport.

The CTA recently undertook an Alternatives Analysis for the Orange Line extension to Ford City and determined that the project currently stands at an estimated $200 million. Community meetings were held in neighborhoods surrounding Midway and Ford City to judge the level of public support for the extension.[4]

In the August 2008 Screen 1 of the Alternatives Analysis, the four corridors being studied for the Orange Line extension include alignments along Cicero Avenue, Pulaski Road, and a combination of the Belt Railway and either Cicero or Kostner Avenues. The corridors selected for further study are Cicero Ave (Bus Rapid Transit) and Belt/Cicero or Belt/Kostner (Heavy Rail Transit).[5] For Screen 2 in April 2009, the Cicero Avenue/Belt Railway corridor was chosen as the most viable option and advanced in the Alternatives Analysis process.[6] By December 2009, the CTA had identified the Locally Preferred Alternative (LPA) as the Belt/Cicero route. According to a CTA report,

"The LPA would operate in a trench along the BRC right-of-way between the existing Midway station and approximately 6400 South, where it would begin to transition to an elevated structure above Marquette Road, where it would curve to the southwest over the BRC Clearing Yard and then continue south on elevated structure in the median of Cicero Avenue. The Orange Line extension would end at a new terminal station in the vicinity of Ford City Mall."[7]

Now the CTA will prepare a draft Environmental Impact Statement (EIS) and complete preliminary engineering. After the Federal Transit Administration approves the Final EIS, design and construction can start. The current extension schedule could potentially lead to service in 2016.[8] 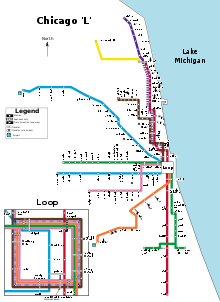 At Adams/Wabash, Orange Line trains continue south back to Roosevelt/Wabash, and make all stops in reverse to Midway.