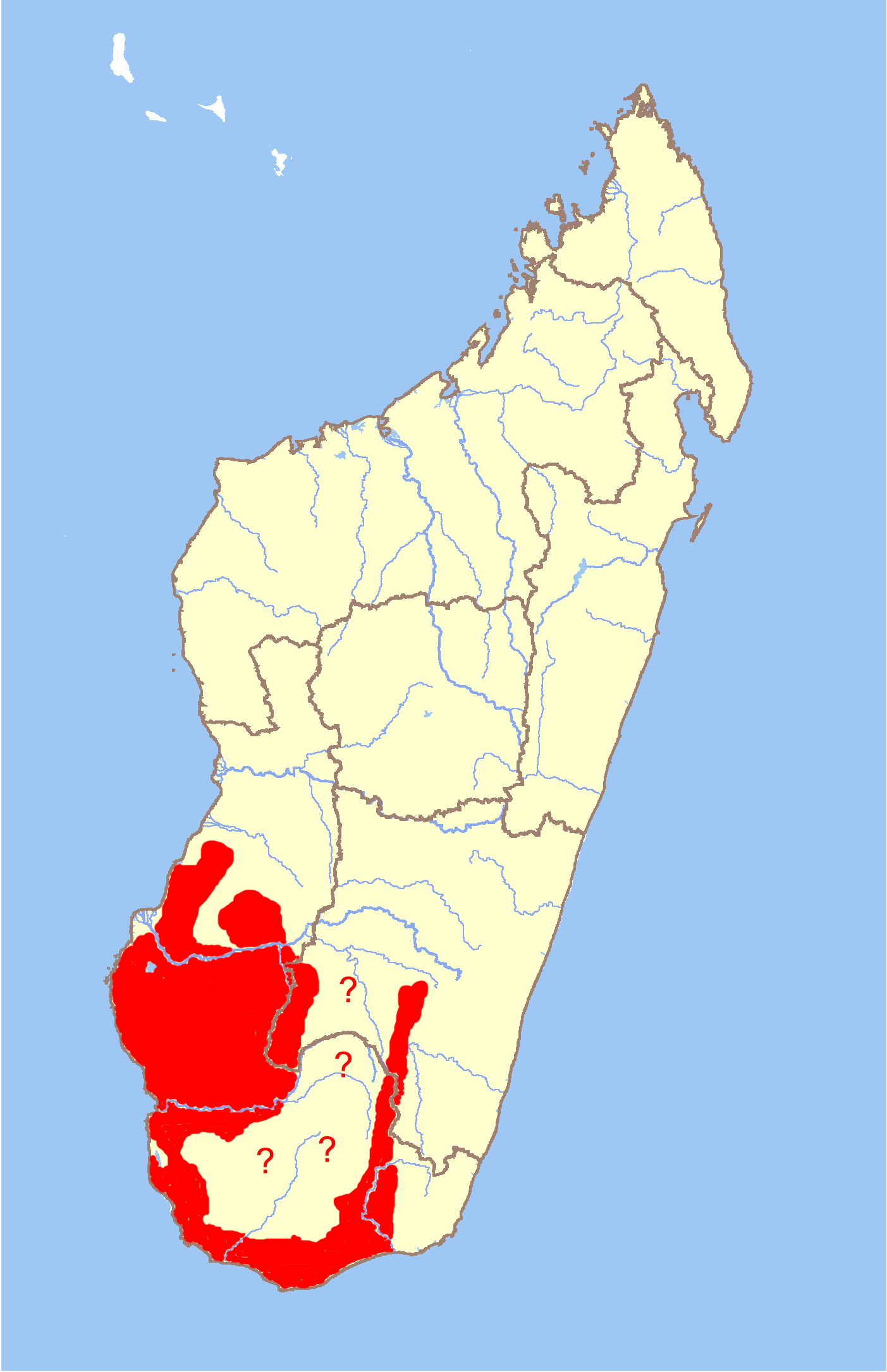 The Ring-tailed Lemur ("Lemur catta") is a relatively large Strepsirhine , a belonging to the family . The only species in the monotypic genus "Lemur", it is found only on the island of &mdash; like all other lemurs. Known locally as Hira

The Ring-tailed Lemur is widely recognized and easily distinguished from other lemur species by its long, black and white ringed tail. It is highly social, as well as matriarchal, a trait uncommon in primates. Like other lemurs, this species relies strongly on its sense of smell, and marks its territory with scent glands. Furthermore, it is one of the most vocal primates, with numerous vocalizations, including group cohesion and alarm calls.

Although threatened by and therefore listed as "Near Threatened" by the ,

The term "lemur" was selected by early biologists because the calls of some elusive lemur species brought to mind the cries of the spirits of the dead, or lemures, from .

No mammalian record has existed in Madagascar until recent times.

The genus "Lemur" contains only one species, the Ring-tailed Lemur.

The Ring-tailed Lemur's trademark, a long, bushy tail, is ringed in alternating black and white transverse stripes, numbering thirteen to fifteen each for both colors, and always ending in a black tip.

The is dense, with the ventral (chest) coat and throat being white or cream, and the dorsal (back) coat and neck being gray to rosy-brown. The crown is dark gray, while the ears and cheeks are white. The muzzle is dark grayish and the nose is black, and the eyes are encompassed by black -shaped patches.

The skin is black in color, and visible on the nose, genitalia, and the palms and soles of the limbs. Like all lemurs, the Ring-tailed Lemur's fingers are slender, padded, and semi-dexterous with flat, human-like nails. Also in common with all lemurs, the Ring-tailed Lemur has a (sometimes referred to as a "grooming claw") on the second toe of each hind limb specialized for grooming purposes. [cite web|title=Lemur Basics|url=http://www.lemurs.us/basics.html|accessdate=2008-08-28] Additionally, this primate grooms orally by licking and tooth-scraping with narrow, procumbent lower incisors and canines, called a .

The species' eyes can be a bright yellow or orange, which stay the same color from the time they are born. Unlike most diurnal primates, but like all strepsirhine primates, the Ring-tailed Lemur has a , or reflective layer on its eye, which enhances .

Furless s are present on both males and females. Both genders have and glands in their genital regions,

Troop sizes range from 6 to 25, with 13 to 15 being the average and groups over 30 individuals being recorded.

This species is found as far east as , north to , along the west coast, and inland towards the mountains of Andringitra on the southeastern plateau. It can be seen in the , , , and .

The following lemur species can be found within the Ring-tailed Lemur geographic range:

The Ring-tailed Lemur is an opportunistic , although it primarily eats fruits and leaves, particularly those of the tamarind tree ("Tamarindus indica"), known natively as the kily tree.

The Ring-tailed Lemur lives in multi-male/multi-female troops, with a as the core group.

For males, social structure changes can be seasonal, with males immigrating between groups during the 6-month period between December through May. Established males transfer every 3.5 years,

In the mornings, the Ring-tailed Lemur sunbathes to warm itself. It faces the sun, sitting in what is frequently described as a "sun-worshipping" posture or . However, it sits with its legs extended outward, not cross-legged, and will often support itself on nearby branches. Sunning is often a group activity, particularly during the cold mornings. At night, troops will split into sleeping parties, huddling closely together to keep warm.

Border disputes with rival troops occur occasionally, and it is the dominant female's responsibility to defend the troop's home range. Agonistic encounters include staring, lunging approaches, and occasional physical aggression, and conclude with troop members retreating toward the center of the home range.

Like most other s, olfactory communication is critically important for the Ring-tailed Lemur. Males and females scent mark both vertical and hortizontal surfaces at the overlaps in their home ranges using their anogenital scent glands. In order to mark vertical surfaces, the Ring-tailed Lemur will perform a handstand, grasping the highest point possible with its feet while it applies its scent.

In displays of aggression, males will engage in a social display behaviour called "stink fighting", which involves impregnating their tails with secretions from the antebrachial and brachial glands, and then waving the scented tail at male rivals.

The Ring-tailed Lemur has a complex array of distinct vocalizations used to maintain group cohesion during foraging and alert group members to the presence of a predator. Calls range from simple, such as the purr Audio2|Lemur_catta--purr1.ogg, which expresses contentment, to complex, such as the sequence of clicks, close-mouth click series (CMCS), open-mouth click series (OMCS), and yaps Audio2|Lemur_catta--click_series_&_yaps.ogg, which is used during predator mobbing.

The Ring-tailed Lemur is polygynous, although one central male typically breeds with more females than the others do. Fighting is most common during the breeding season.

The breeding season runs from mid-April to mid-May, with lasting approximately 4-6 hours.

Cognitive abilities and tool use

Historically, the studies of and in non-human primates have focused primarily on s (monkeys and apes), while strepsirrhine primates, such as the Ring-tailed Lemur and its allies, have often been overlooked and popularly dismissed as unintelligent.

This idea has been perpetuated by the commonly held view that the neocortex ratio (as a measure of brain size) indicates intelligence.

Regardless of this, research has continued to illuminate the complexity of the lemur mind, particularly that of the Ring-tailed Lemur. Even as early as the mid-1970's, studies had demonstrated that they could be trained through using standard schedules of reinforcement.

More recently, research at the has shown that the Ring-tailed Lemur can organize sequences in memory and retrieve ordered sequences without language.

Since tool use is considered to be a key feature of primate intelligence, the apparent lack of this behavior in wild lemurs, as well as the lack of non-food object play, has helped reinforce the perception that lemurs have less intelligence than their simian cousins.

Human activity is the greatest threat to the Ring-tailed Lemur. is the greatest concern, with much of its range being cleared through annual burning to create pasture for livestock. Furthermore, and the felling of trees for production are having a severe impact. This species is also hunted for food () and kept as pets.

* The Ring-tailed Lemur has been popularized in the television series Lemur Kingdom (United States) and (United Kingdom), as well as the character Julien in the animated films Madagascar (2005) and (2008). The television series depicts real events in the lives of wild Ring-tailed Lemurs, whereas the animated films depict representations, with lemurs talking, singing, and dancing. The Ring-tailed Lemur was also the focus of the 1996 Nature documentary "A Lemur's Tale", which was filmed at the Berenty Reserve and followed a troop of lemurs. The troop included a unique infant named Sapphire, who was nearly , with white fur, sparkling blue eyes, and the characteristic ringed tail.

This species also played a role in the 1997 comedy film "", starring , who has a passion for lemurs.