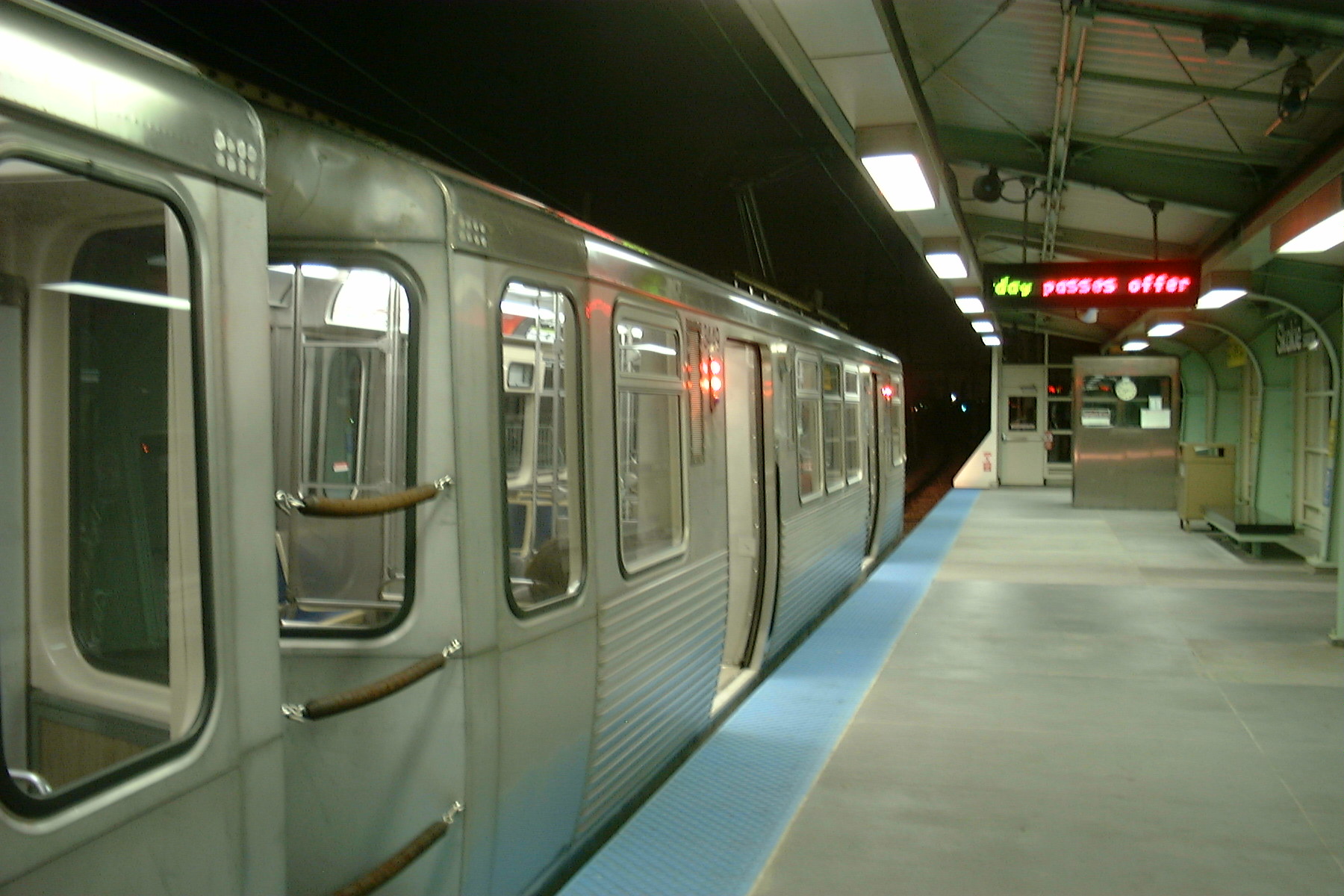 The Yellow Line (Skokie Swift Service), is part of the 's rapid transit system in . The 5.1 mile (8.2 km), non-stop shuttle route runs from the Howard Street Terminal on the northern city limits of Chicago, through the southern part of suburban Evanston, to the Dempster Street Terminal in .

At Howard Street, Yellow Line passengers can transfer to the Purple or Red Lines of the CTA. The Yellow Line is the only CTA line that does not go to Chicago's Loop. It is also unique in that it runs in a below-grade trench for part of its length, although it has no subway component and does not run in an expressway median and it includes grade segments and crossings at the northern portion of the line. It was built using the tracks of the former 's high-speed Skokie Valley Line.

Extending the line to Old Orchard Mall in Skokie has been discussed as well. At one time the line had several intermediate stops in Evanston and Skokie--including one at Oakton--but these stations have long been out of use and have been dismantled.

Travel time along the Skokie Swift-Yellow Line is about eight minutes. Trains operate using -built 3200-Series rail cars (and occasionally 2600-Series rail cars) in two-car train consists with 10 to 12 minute headways all day. Service is provided Daily, Monday-Friday between 5am and 10:30pm, Saturday-Sunday 6am and 11pm with about 2,800 daily station boardings.

The Yellow Line begins at the Skokie terminal located at 5005 Dempster St. in Skokie. A stub track extends north of the station to allow trains to turn around. The line runs south from Skokie at street level. After crossing Oakton Street, the Yellow Line turns east and briefly rises to cross Skokie Boulevard (U.S. Route 41) before returning to grade level. After the East Prairie Road grade crossing, the tracks rise to become an elevated route. At this point, the route passes the Skokie Shops CTA maintenance facility and crosses over the . After passing over Dodge Avenue, the tracks descend into a below-grade trench. The line remains in the trench for about mi to km|1, then passes under the and Purple Line tracks to enter Howard Yard. The line then rises to serve the elevated Howard station. A stub extends south of the station to allow Yellow and Purple Line trains to turn around.

The Yellow Line originally started as the Niles Center Branch of the old Chicago Rapid Transit Company (CRT). The rapid transit service began as part of the Chicago North Shore and Milwaukee Railroad's high-speed Skokie Valley interurban line on a five-mile section between Howard Terminal and Dempster Street, Niles Center. It was placed in operation on , .

The route included several intermediate stops through Evanston and Skokie (then called Niles Center) at Ridge, Asbury, Dodge, Crawford/ East Prairie, Kostner, Oakton and Main. On , , the Chicago Transit Authority (who had just bought out the Chicago Rapid Transit Company in ) discontinued service over the Niles Center Branch and replaced it with the #97 Skokie bus service. The stations were closed and remained dormant for the next 15 years.

The CRT had always owned the trackage between Howard Street and the Skokie heavy repair and inspection shops and thus their successors, the CTA, would inherit it as well.

On , , the Chicago North Shore and Milwaukee Railroad ceased all of its operations, and the remaining mi to km|2.4 section of trackage between the Skokie Shops and Dempster Street was purchased by the CTA. The intermediate stations were never reopened. Some of the vacant station houses were used by other businesses, including a convenience store and an electrical supplier, before finally being razed in the 1980s.

The Skokie Swift high-speed (5 miles in 6-1/2 minutes) service, between Howard Street in Chicago and Dempster Street, Skokie, was inaugurated on , , as a federally-aided mass transportation demonstration project. Participation in the net project costs was divided between the , CTA and the Village of Skokie.

The success of this project had attracted nationwide attention. On its first day of service, Skokie Swift carried nearly 4,000 passengers in a 16-hour period compared to approximately 1,600 passengers carried by the North Shore Railroad from the Dempster Terminal in a 12-hour period before the railroad terminated. Ridership continued to increase and by the end of the first year, nearly 6,000 passengers were riding the new line each weekday.

Because of the weekday success, Saturday service was inaugurated, with more than 2,000 riders. At the end of the two-year experimental period, 3,500,000 persons had used the new service, and CTA authorized operation of the Skokie Swift as a permanent part of its rapid transit system.

The success of the Skokie Swift route demonstrated that many motorists will forsake their cars when high-speed mass transit is provided, and to a minor extent, gave birth to the first use of "light rail" before the term was ever coined.

On , , Saturday service was discontinued during a service purge by CTA. The "Skokie Swift" name was changed to the "Yellow Line" in , when all Chicago 'L' lines were renamed for colors. The Dempster Street Terminal was completely remodeled in , with a new station house and train platforms. In , the old brick station building (designed by architect ) was moved 150 feet to the east, then was restored and converted into commercial property.

Three alternatives are being studied, one plan would have the Yellow Line tracks follow the old North Shore Railroad right-of-way at grade from Dempster Street to about Church Street, then follow private property, possibly in a subway north to Golf Road. The route could then emerge from the short tunnel in an open-cut to the proposed Old Orchard Terminal which could also be built below street grade, or as an elevated structure immediately west of the mall. Another alternative keeps the yellow line on the former Chicago & Northwestern and North Shore Line right of way, passing under the north of Golf Road and terminating at Old Orchard Road near Woods Drive.

Also, the planning process is nearing completion to establish a new intermediate stop on the Yellow Line at Oakton Street in downtown Skokie to serve the , which is scheduled to be completed in 2008, and other stops have been proposed at Kostner Avenue, , and perhaps on the section of the route in Evanston. Plans are also being studied to resume weekend service if ridership increases are sufficient when the new stations open.

On , , weekend service commenced following CTA board approval for a six month trial period on the Yellow Line to determine if it gains enough ridership to keep that service permanent.