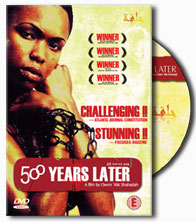 
"500 Years Later" ( _ge. ፭፻ ዓመታት በጓላ "transl|gez|500 ʿamätatə bägwala") is the title of an independent documentary film directed by , written by released in 2005. It won 5 international film festival awards (including 'Breaking the Chains Award' [http://www.ziff.or.tz/details/winners.htm] )in the category of Best Documentary, it has been heralded as one of the most powerful African and documentaries of this centuryFact|date=February 2007. "500 Years Later" has received praise as well as controversy, both for the genre of the film (creative documentary), and the social-political impact of the film as it relates to race study. The film opened on , , at the Pan-African Awards (PAFF) and won Best Documentary at its premiere. The film made its television premiere on August 23, 2008 on .

This soundtrack offers a glimpse into the worlds and landscapes that make up the music of the . The breadth of this rich cultural legacy that often has to exist within the limited confines of the genres defined and created by others outside of itself. But, it is only when we see this legacy in its entirety that we can begin to appreciate and understand its magnitude and see why it has been, and continues to be, one of the most influential forces within music and culture.

* The documentary does not use any narration which is rare for a feature length film; it uses the interviewees in a unique way to create a seamless transition from topic to topic
* The film uses a mixture of quotes and statistics, as well as sound bites to support its claims
* '500 Years Later' uses chapters to divide the topics.
* One of the only documentaries made in line with the politics of the .
* The film was the first mainstream Western documentary to use Ge'ez characters for the film title, _ge. ፭፻ ዓመታት በጓላ ("transl|gez|500 ʿamätatə bägwala") . The script also appears in the trailer and promotional material of the film.
* Features