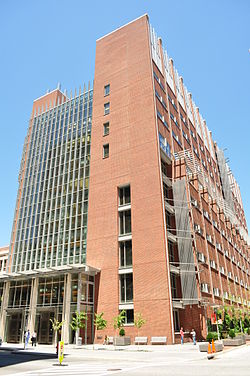 The University of Maryland Dental School

The University of Maryland Dental School was the first dental school in the world. Founded in 1840 as the Baltimore College of Dental Surgery (BCDS), it was chartered by an act of the Maryland General Assembly. Its principal founders were Drs. Horace H. Hayden and Chapin A. Harris. It was the first school in the world to offer a science-based curriculum in dentistry.[1] It currently ranks among top 10 in the nation to receive NIH research funding. The school moved to a new building in October 2006. The new building, located adjacent to the old one in Baltimore Street, offers some of the newest facilities and technologies in the world for education and patient care. The cost of construction and equipments was over $140 million USD, the highest spent by the state of Maryland on an academic building.

University of Maryland School of Law

The University of Maryland School of Law opened in 1816 as the "Maryland Law Institute" "in a spacious and commodious building on South street, near Market street." [2]. It is the third-oldest law school in the nation. [3] It was founded by David Hoffman Esq., who authored a comprehensive Course of Legal Study, which had a lasting influence on other law school programs around the country and led to the development of legal ethics programs and responsibilities. [4] The law school moved to a new building in 2002, adjacent to the site of Westminster Presbyterian Burying Ground the cemetery where the poet and writer Edgar Allan Poe is buried. It is the only law school in the United States with a famous author buried on its campus. Westminster Hall is used for campus events and is often requested for wedding ceremonies.

The University of Maryland School of Law was ranked 36th among law schools according to the 2008 edition of U.S. News and World Report law school rankings and was also ranked among the top 10 programs for health law, clinical law and environmental law. The School of Law's students' undergraduate median GPA is a 3.65 and median Law School Admissions Test (LSAT) score is a 162. It admits 16.1% of applicants, making it one of the most selective law schools in the country. [5]. The law school takes about 220 full time day students and about 75 evening students per year. [6]

The current Dean of the School of Law is Phoebe A. Haddon.

University of Maryland School of Medicine

Established in 1807, the University of Maryland School of Medicine is the first public and the fifth oldest medical school in the United States and the first to institute a residency training program. The medical school includes Davidge Hall, which was built in 1812 and is the oldest building in the Northern Hemisphere in continuous use for medical education. [7] It is listed on the National Register of Historic Places. In the 1950s, it was named after founder and first Dean John Beale Davidge.

The Medical School offers a joint MD/Master of Public Health (MPH) degree. [8] In July 2005, the majority of the Ph.D. granting programs that were previously department based were reorganized to for the Graduate Program in Life Science [9].

The School of Medicine also houses the Department of Physical Therapy and Rehabilitation Sciences (PTRS) established in 1956. The PTRS program offers a Doctor of Physical Therapy Degree (DPT) which lasts 3 years. In the 2008 edition of U.S. News and World Report physical therapy school rankings, UMB PTRS ranked 15th in the nation.

The Medical School was ranked 30th for primary care and 41st for medical research in the 2008 edition of U.S. News and World Report medical school rankings. It admits 8.4% of applicants. [10]. This school recently celebrated its bicentennial culminating with the 2007 commencement. The current Dean is Dr. E. Albert Reece, M.D., Ph.D., M.B.A., F.A.C.O.G., who also served as Acting President of the University of Maryland, Baltimore during the transition between Dr. Ramsay and Dr. Perman.

The University of Maryland School of Medicine has launched two research institutes, the Institute of Human Virology (IHV) and the Institute for Genome Sciences (IGS).

The Institute for Genome Sciences (IGS)
Launched in 2007, the Institute for Genome Sciences (IGS) is an internationally recognized genomics research center at the University of Maryland School of Medicine. IGS investigators use genomic and bioinformatic tools to research genome function in health and diseases and work in interdisciplinary collaborations with biomedical investigators. IGS is led by Dr. Claire M. Fraser-Liggett. Research areas include: Bioinformatics, Cancer Genomics, Functional Genomics, Human Genetic Variation, Infectious Diseases, Organismal Diversity and Evolution, Human Microbiome Project, Plant Genomics, and Microbial Community Ecology. Investigators at IGS work on Disease Ontology research, the Data Analysis and Coordination Center (DACC) for HMP, and other grants. IGS is one of the Genome Sequencing Center for Infectious Diseases (GSCID) centers designated by NIAID.

University of Maryland School of Nursing

The School of Nursing building, which opened in November 1998, shares a 32-acre (130,000 m2) campus in downtown Baltimore with five professional schools — Dentistry, Law, Medicine, Pharmacy and Social Work — as well as the University of Maryland Medical System and the Veterans Affairs Medical Center. The campus is a national leader in health sciences research, with $256 million in grants and contracts in fiscal year 2001.

The School of Nursing has pioneered a variety of innovative educational programs, including the first nursing informatics program in the world and the nation’s first nursing health policy program.[citation needed] More than 20 specialties are offered at the graduate level, including trauma/critical-care, oncology, gerontology, psychiatric/mental health nursing, and nursing administration. In 1999, the School of Nursing became the only school in Maryland to offer a midwifery program, pre-accredited by the American College of Nurse Midwives.[citation needed] Nurse practitioner options are also offered in family, pediatrics, women’s health, neonatal intensive care, adult primary care, acute care and geriatrics.

To provide clinical programs for students, the School of Nursing maintains affiliations with more than 300 hospitals and health care agencies throughout Maryland. In addition, within the 154,000-square-foot (14,300 m2) School of Nursing building are clinical simulation laboratories, which also afford students hands-on training in a real-life setting.

The School of Nursing offers a wide range of courses at off-campus locations. Students can enroll at numerous outreach sites throughout the state, permitting residents in remote, educationally under-served areas to complete undergraduate and graduate degrees in nursing. Linking regional, national and international audiences, the School incorporates the most advanced classroom and laboratory design, as well as modern distance learning communications technology, to provide a state-of-the-art education experience.

The School of Nursing Living History Museum, officially opened in October, 1999, examines the history of the nursing profession from its earliest days to present day.

University of Maryland School of Pharmacy

The University of Maryland School of Social Work is a top program in social work education. Graduates of the School of Social Work have become policymakers at all levels of government, from the U.S. Senate to the state and federal courts, to the State Department and departments of social services. Graduates also work as educators and researchers at universities across the country and have become therapists, community organizers, and managers. According to the most recent rankings, The University of Maryland School of Social Work was ranked 18th among schools of social work in the 2008 edition of U.S. News and World Report.

The University of Maryland, Baltimore has two main libraries on its campus: The Health Sciences & Human Services Library (HS/HSL) and the Thurgood Marshall Law Library.

UMB's Health Sciences & Human Services Library was founded in 1813 from the collection of Doctor John Crawford, a former British naval surgeon, and is the origin of the entire University of Maryland Library System.[12] The first location of the library was across from the medical school (now known as Davidge Hall), in a church. The church was later razed for construction of a new library that opened in 1960. The library has since moved into a large modern building in 1998.

Name of the Institution

The campus is composed of 58 buildings located near Camden Yards and Baltimore's famous Lexington Market. Construction on a new 114,000-square-foot (10,600 m2) campus center began at the start of 2007 and opened in August 2009 as the Southern Management Corporation Campus Center (SMC Center).[13] The SMC Center contains dining facilities, meeting locations and the campus's gymnasium and recreation facility, URecFit. UMB has also recently undertaken a vast west campus expansion. This 10-acre (40,000 m2) project, known as BioPark, will create ten new buildings containing a total of 1,200,000 square feet (110,000 m2) of classroom, lab, and office space.[14] In addition, University of Maryland Medical System has cleared a downtown site for the construction of a $329 million ambulatory care center.

The university is served by the University Center/Baltimore Street station of the Baltimore Light Rail system, which is at the eastern edge of campus. The Orange Route of the free Charm City Circulator provides service to both the BioPark and through the UMB campus to the inner harbor and points east.

The university is protected through the University of Maryland, Baltimore Police Department. The UMB Police department is a state and nationally accredited police agency providing law enforcement services to the UMB campus and surrounding communities.[4] Through an agreement signed between the UMB Police Department and the Baltimore City Police Department, UMB Police officers have the same jurisdiction and authority as Baltimore City Police officers throughout the campus of the university. [5] The UMB police force is composed of both sworn officers and unarmed security guards who are located in university-owned buildings to control access to the buildings and for other security purposes. [6] The UMB Police force also provides escort services to students and university personnel throughout the campus, either though an escort vehicle, or a walking escort by an officer. [7]