The University of Baltimore (UB), located in downtown Baltimore, Maryland in the Mt. Vernon neighborhood at 1420 N. Charles Street, is part of the University System of Maryland. Through the Freshman Initiative or Lower Division Initiative, UB has transformed from an upper division university to a traditional university.[3] In addition, the University has changed the school colors to blue (PMS 3025) and green (PMS 362), updated the "UB" logo,[4] and adopted the new slogan-- "Knowledge that works".[3] In 2010, the school was chosen as the site of the 2011 US-Balkans Business Summit.

Founded in 1925 by a group of Baltimore business professionals, UB sought to provide educational opportunities for working men and women. In the 1970s UB merged with Eastern College, Mount Vernon School of Law, and Baltimore College of Commerce. In 1975, UB became an "upper division academic institution", offering only third and fourth year undergraduate and post-graduate course work. At the same time, ownership was assumed by the State of Maryland. In 1988, the state merged UB into the new statewide university system, the University of Maryland System, which was later renamed University System of Maryland.[5]

The Lower Division Initiative is a program that began in 2005 to extend the University of Baltimore's current position to once again offer the first two years of the baccalaureate degree. In April 2005 the University System of Maryland's Board of Regents approved plans that would allow UB to start accepting freshmen and sophomores. Under the original plan, freshmen and sophomore would be admitted starting in the fall of 2006.

In a unanimous vote that took place on February 15, 2006, the Maryland Higher Education Commission approved a revised mission statement submitted by the University of Baltimore, thus enabling the University to return to four-year undergraduate status. This is the same initiative that already received approval from the Board of Regents in April of the prior year; however, the plan was revised slightly, calling for freshmen to be admitted in the fall of 2007.

The University states that this new program will better reflect the current focus, and will be designed to prepare students in business, pre-law, technology, public affairs, and applied liberal arts. The University says that it will be offering Freshman "free" tuition for their first year. This was offered because of a donation made by an anonymous private donor. In the fall of 2007, it was said that up to 140 Freshman would be entering.[6]

UB offers professional degree programs leading to a Doctorate in Communications Design or Public Administration. UB through its law school offers a Juris Doctor and several concentrations. In addition, the law school offers a Master of Laws in the Laws of the United States and Taxation.[7]

The University is composed of multiple colleges and schools:[11] 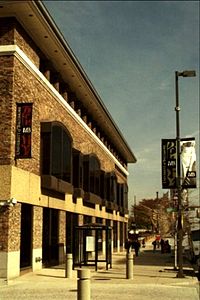 The main campus is located in Baltimore's Mt. Vernon cultural district, close to downtown and the Inner Harbor. The Lyric Opera House, Joseph Meyerhoff Symphony Hall, and the Maryland Institute College of Art (MICA) are nearby. For the most part, the main academic buildings surround the intersections of Mount Royal Avenue and North Charles Street. Gordon Plaza is at the center of campus.[12]

The principal academic buildings include:

The University, the Bozzuto Group, and the Gould Property Co. entered into a public-private joint venture to develop UB's Bolton Yard parking lot into a mixed use development, including apartments, a bookstore, a grocery store, speciality retail, and garage parking.[13] The project, which is named the Fitzgerald at UB Midtown was scheduled to break ground in 2008.[14] The facility was largely complete by 2011, with the bookstore, parking ramp and housing portions in use by that time. The Fitzgerald project was viewed at the time of its inception as a prelude to future public-private development projects, for instance student housing.[13] To that end, an October 2010 announcement indicated that the university was planning an 11-story student housing tower, to again be built in partnership with a private company, according to The Baltimore Sun.

UB's Department of Public Safety is the law enforcement body that protects and serves the students, staff, and visitors on its main campus. In addition, the department collects and distributes campus crime statistics, offers women’s self defense courses, issues student identification cards, and operates several crime prevention programs.[15] Under a Memorandum of Understanding (MOU) with the Baltimore Police Department, the UB campus police have concurrent jurisdiction for twenty blocks into the city of Baltimore from UB's main campus.[16] The current chief of police is Samuel D. Tress.[15]

Penn Station, with connections to Amtrak and MARC service, and a Light Rail stop, are just to the north of campus. The University of Baltimore/Mt. Royal station on the Baltimore Light Rail system is on northwest edge of campus. The State Center station on the Baltimore Metro system is just a few blocks from campus. UB runs shuttle bus service between its academic buildings, parking garages, and the nearby public transportation/local transit stops.[17]

In conjunction with the University System of Maryland, UB offers courses and several undergraduate and/or graduate degree programs[18] at the Universities at Shady Grove in Rockville, Maryland.[19] In addition, the university also offers its Master of Arts in Legal and Ethical Studies and Master of Public Administration programs at the National Labor College in Silver Spring, Maryland[20] Through a partnership with College of Southern Maryland, UB offers the upper-level undergraduate coursework leading toward Bachelor degree in Business in Southern Maryland.[21] UB also offers some classes online.

UB has numerous academic clubs, student organizations, and an active student government.[22] The academic clubs usually sponsor a host of programs and speakers throughout the school year. The UB Post is the monthly student newspaper; which serves the purpose of keeping the general student population informed of upcoming campus activities, as well as relevant news.[23] The Student Center is the central place for students—housing the bookstore, food services, student government and organization offices, and study lounges[24]

UB has an athletic/fitness center named Campus Recreation and Wellness. The Director of Campus Recreation Services is Bill Schnirel and Assistant Director of Intramurals and Sport Clubs is Dustin Fisher. Campus Recreation and Wellness at University of Baltimore is continually growing for the betterment of the university and surrounding community. Campus Recreation And Wellness has an aerobics studio, a sparring/boxing room, two indoor racquetball courts, a well-equipped gym, a basketball court, and locker rooms. The Recreation Center, located on the third and fourth floor of the Academic Center, offers fitness classes free of charge on a first come/first serve basis to all members and hosts the Sport Club and Intramural Sports teams.[25] At one time, UB owned and operated a golf driving range in the Mount Washington neighborhood of Baltimore. However, this facilitate has been leased to the city. Campus Recreation Services seeks to serve the recreation, fitness, health and leisure needs of the university community through instructional and competitive sport activities, including aerobics classes, golf lessons, intramural sports, informal recreation and sport clubs. The Recreation Center facilities include basketball, racquetball, badminton and volleyball courts, weight and cardio rooms, aerobic and spinning studios, indoor golf cage, foosball, darts, Wii gaming system, as well as locker rooms and a sauna. The facilities are open to students, faculty, staff and Recreation Center members with validated University of Baltimore I.D. cards.

For the latest league, class or activity schedules, visit www.ubalt.edu/campusrec . [26]

The university hosts chapters of several honor societies, including:[27]