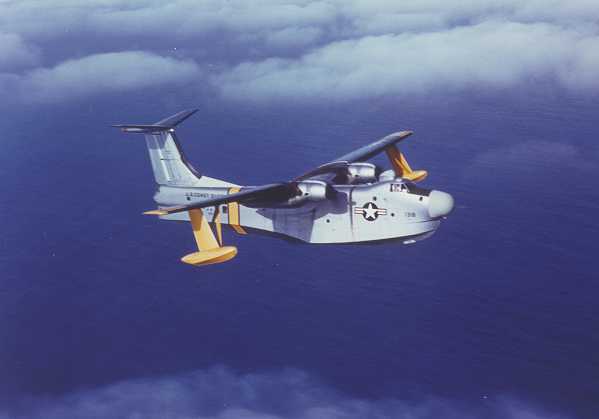 The Martin P5M Marlin (P-5 Marlin after 1962), built by the of , was a twin engined piston powered entering service in 1951 and serving into late 1960s in service with the for naval patrol. It also served in the U.S. Coast Guard and with the French Navy. 285 were produced overall.

Built as evolutionary successor to the , it had better engines, improved hull form, and more conventional tail. The XP5M Marlin prototypes were based on the last PBM-5 Mariners, the company designation being Model 237. It would be heavily improved again leading to the P5M-2 (Model 237B), which was redesignated SP-5B. A number of P5M-1 models were also used for training, designated TP-5A (after 1962).

The Marlin was designed as a ed aircraft to lift the engines and propellers high above the spray. Power was by two s. The rear hull did not lift sharply from the water at the tail, instead rising up steadily, a Martin innovation; this gave the aircraft a longer base of flotation and reduced "porpoising" over waves.

The prototype had nose and tail turrets with twin 20 mm cannon in each, as well as a dorsal turret with two 0.5 in (12.7 mm) s. The cockpit area was the same as the Mariner's. It first flew in .

The first of 167 production P5M-1 aircraft was produced in 1951, flying on . Changes from the prototype included a raised flight deck for improved visibility, the replacement of the nose turret with a large for the AN/APS-44 search radar, the deletion of the dorsal turret, and new, streamlined wing floats. The engine nacelles were lengthened to provide room for weapons bays in the rear.

The P5M-1 was followed by 116 P5M-2 planes. These had a to put the tail surfaces out of the spray, a AN/ASQ-8 MAD boom at the rear of the tail-tip, no tail guns, better crew accommodation and an improved bow to reduce spray during takeoff and landing.

The last flying boat operations of the United States Navy were patrols of VP-40.

Seven P5M-1Gs and four P5M-2Gs were built for the for service, but the service found the planes difficult to maintain and surplus to requirements. They were given to the Navy, which used them as trainers since they had no provision for armament.

The took delivery of ten ex-USN Marlins in 1959 to replace s in maritime patrol service, based out of , in West Africa. They were returned five years later.

;XP-5M:Prototype converted from a with modified hull.

One P-5 is at the at , Florida. It is currently in poor condition but is scheduled for partial and, eventually, full restoration. The restoration is being financed by the museum and by the Mariner/Marlin Association.