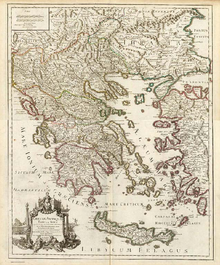 The David Rumsey Historical Map Collection is one of the world's largest private map collections. It has some 150,000 maps and cartographic items. The collection was created by David Rumsey, who after making his fortune in real estate, focused on collecting 18th- and 19th century North and South America as this era "saw the rise of modern cartography."[1]

There are now over 17,000 digitized maps available through his website, http://www.davidrumsey.com, and about a dozen of which are currently being hosted through Google Earth layers. Select maps are also featured at the Rumsey Maps island in Second Life.

The website presents maps using two Insight viewers from Luna Imaging, Inc.—one using Javascript and the other using Java—from files stored in MrSID format on its server. Maps can be exported as JPEG from the Java viewer.

In February 2009, David Rumsey announced that the entire collection would be donated to Stanford University, including 150,000 maps and their digital images, plus the davidrumsey.com web site (where the images are publicly posted on-line), as well as the database used to track the images.[2]