La Ronde (sometimes called Six Flags La Ronde) is an amusement park in Montreal, owned and operated by Six Flags. It is the largest in the province of Quebec and the second largest in Canada after Canada's Wonderland, with about 2.5 million guests in 2006. The park is under a emphyteutic lease with the City of Montreal, which expires in 2065.

La Ronde closes its season the last weekend of October. To celebrate Halloween, in the late couple weeks of October, the park hosts its annual La Ronde's Halloween Fright Fest. The festival includes an extravagant haunted house and dozens of horrifically-costumed performers, who roam the park looking for new victims to thrill and scare. 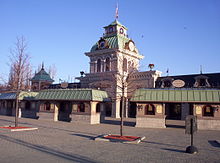 La Ronde was owned and administered by the City of Montreal until it was sold to Six Flags, an American theme park chain, in a deal completed on May 4, 2001. They acquired all of the assets of the park for 20 million USD and have a long-term contract to lease the land from the city. Before the announcement of the Six Flags purchase, the city had considered offers from other bidders including Paramount Parks, Cedar Fair, and Parc Astérix. Since then Six Flags has invested around 90 million dollars in new rides and improvements,[1] such as Le Vampire, Splash, Le Goliath and Ednör - L'Attaque as well as a new main entrance.

La Ronde also includes a Nintendo-sponsored video game center. Inside are the latest Nintendo video games and attractions. Since 2009, the former 3D theater housed Nintendo DS and Wii consoles, as well as advertisements and a Nintendo Store.

Since the takeover by Six Flags, prices of admission as well as on-site food and beverages have skyrocketed. Some prices of beverages are precisely three dollars per bottle. One of the most popular restaurants at La Ronde is the McDonald's in the center of the park due to its relatively low prices compared to other franchises in the park.[citation needed]

In May 2002, La Ronde announced the installation of a Bolliger & Mabillard inverted roller coaster called Le Vampire and was the first major investment by Six Flags.[2] It is a clone of the "Batman - The Ride" roller coasters found at many other Six Flags parks.

In May 2006, La Ronde opened its 9th roller coaster, The Goliath, a 53-metre (174 ft) high Bolliger & Mabillard mega coaster. It reaches speeds of 110 km/h (68 mph), making it the second tallest and the second fastest roller coaster in Canada. It was surpassed by Canada's Wonderland's Behemoth in 2008, which will also be surpassed in 2012 by Leviathan, a giga coaster currently being constructed in Canada's Wonderland as well.

For the 2007 season, La Ronde painted its iconic observation tower bright orange to advertise Pizza Pizza, an Ontario pizza chain that, at the time, was just emerging into the Quebec market. As well, all of the pizza stands inside the park were renamed from Pizza Ronde to Pizza Pizza.

As well in 2007, La Ronde celebrated its 40th anniversary. As a special event, Le Galopant, the oldest merry-go-round in the world was installed in the park. It was also featured at Expo 67.[3]

The Serial Thriller, a Vekoma Suspended Looping Coaster formerly located at the now defunct Six Flags Astroworld, has been shipped to La Ronde from the Great Escape & Splashwater Kingdom, another Six Flags property where it lay in storage since 2005. The roller coaster, which originally opened in 1999 at Six Flags Astroworld, has been installed over the Lac des Dauphins at the park for the 2010 season and is named Ednör - L'Attaque.[4] It features special effects and theming from an alleged sea monster that was reported to have appeared in the Lac des Dauphins.[5]

On March 9, 2010, La Ronde announced that Terminator X: A Laser Battle for Salvation, an interactive laser-tag attraction themed around the Terminator series, will also be featured in the park for the 2010 season.[6]

Every year at La Ronde, they present audiences with a pyjama day fireworks show.

In January 2009, La Ronde announced its intentions to become a Six Flags branded park, thereby using the rights to Warner Bros. and DC Comics trademarks under the licensing agreement with Six Flags.[7] Le Vampire, a mirror image of Batman: The Ride constructed in 2002, carries no association to the Batman media franchise because the license with Warner Bros. and DC Comics is not valid in unbranded Six Flags parks.[8] It is yet unknown if Le Vampire will be re-branded to Batman: The Ride once the branding of the park commences.

The site is accessible by automobile via a special exit off the Jacques-Cartier Bridge. On-site parking is available at a cost of $15 per day for regular parking, $20 on days when there are fireworks presentations, or $25 for VIP parking. A seasonal parking pass is available for $85 ($115 for a seasonal VIP parking pass).[9] [10]

During the months when the park is open, the Société de transport de Montréal runs a free shuttle bus (known as route 167) between the park and Jean-Drapeau metro station on Île Sainte-Hélène. That station is on the yellow line. Additionally, route 169 connects La Ronde to Papineau Metro station, in eastern Montreal.[10]

Finally, La Ronde operates a private marina for access to the park by boat.[10] The daily rates are as follows: $20-$25 for a half-day and $35-$45 for a full day. The lower number represents boats 24' and under, the higher represents boats 25' and over. Overnight, weekly, monthly and seasonal rates are also available. Septic-emptying and boat launch services are offered on-site.[11] 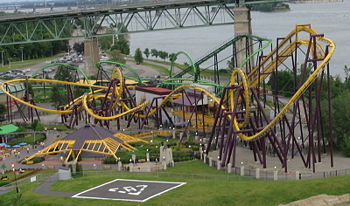 Le Vampire (yellow) with the Cobra (green) in the background, as viewed from the Grande Roue

The roller coaster was relocated in 1994 from the Skara Sommarland amusement park in Sweden, where it was known as the Stand Up. In 2007 it was announced that a colony of Townsend's big-eared bats had settled in the ride's engine room. Le Cobra is a clone of the Shockwave coaster that was at Six Flags Magic Mountain, Six Flags Great Adventure, and later at Six Flags Astroworld as Batman: The Escape. Cobra only has one inversion (a loop), a turnaround dive hill, and a helix through the only loop.

Unlike B&M built stand-up coasters, this ride is considered rougher then most roller coasters of its kind. The ride is over 20 years old (originally built in 1988) which has led to it becoming rough over time. However, most Intamin stand-up roller coasters are considered rough. The two Intamin engineers of this ride and Shockwave, the ride Cobra is a clone of, went on to found B&M a few years later. 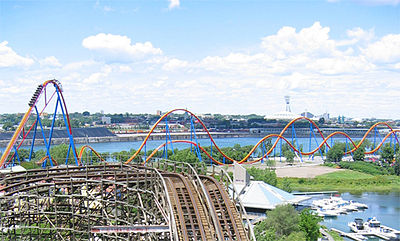 Taken from the top of Le Monstre at La Ronde amusement park. The Goliath is the red, yellow and blue ride to the north 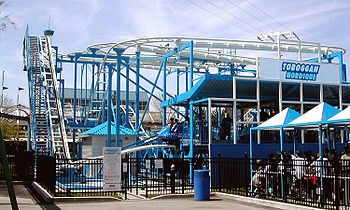 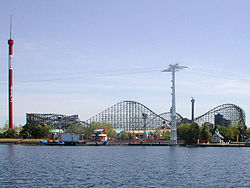 Le Monstre and La Spirale from across the lake. 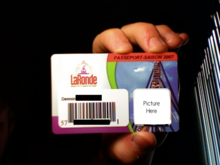 With the introduction of the Flash Pass in 2007, visitors can “hold their place in line” electronically allowing them to go elsewhere in the park while waiting for an attraction. They will be alerted by the Flash Pass device when it is almost their turn to ride. Three types of Flash Pass are available: Regular, Gold, and Platinum. A regular pass simply holds your place in line. Gold holds your place as well as reducing your waiting time by 75%. Platinum reduces your waiting time by 90% and allows you to ride twice and only wait once. The Flash Pass is purchased separately from normal park admission. The flash pass prices increase as they reduce your waiting time. There is only a restricted number of Flash Passes available for purchase on a given day.