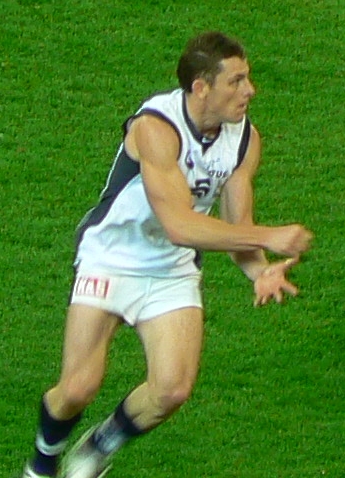 Scotland was an underrated onballer for Collingwood, though suffered from being the player interchanging between the last place selected in the senior team, and the first dropped at the sign of trouble. Following promising early seasons, Scotland's career at Victoria Park appeared on the slide when he played in only rounds one and 22 of season 2001, however, in collecting 28 disposals against the Kangaroos at Manuka Oval in the final round, he arguably saved his Collingwood career, coach stating that he had matured considerably as a footballer over that period of time. Scotland enjoyed a career-best 2002, playing a then career high 19 matches, including every match following the round 12 loss to , having not appeared since the victory over Essendon. It was here that Scotland established himself as a classy user of the , his footskills and composure welcome additions to an onball bridge built on grunt and hard work, his polish in disposal helping sand the rough Magpie midfield edges. A quiet performance in the stunning Qualifying Final defeat of Port Adelaide at AAMI Stadium saw Scotland's name bandied around by media pundits as the man most likely to make way for the returning for the Preliminary Final against Adelaide two weeks later. The selection committee thought overwise, vice-captain the unlucky man to make way for the skipper. Scotland vindicated his selection with 19 disposals and a vital goal late in the second term. His Grand Final efforts were solid off the bench, his season a perfect platform for which to grow from in the coming seasons.

Unfortunately, Scotland was again not afforded the opportunity's his form with Williamstown in the VFL warranted, playing only four of the first 19 matches. However, following the side's loss to Brisbane in round 19, Scotland was again called upon, and he did not miss a beat for the rest of the season, notching double-figure possession tallies for the remainder of the year, 19 possessions and three goals in the wet against Sydney at Telstra Stadium in round 21 putting an exclamation mark on his abilities. Again beginning on the interchange, Scotland, despite gathering only eight disposals, was one of the few Magpies to handle the ball with any confidence in the 50-point Grand Final humiliation against Brisbane.

Sadly, the writing was on the wall for the likeable wearer of Scott Russell's number 29 guernsey, who requested that he be moved on during the October trade week in search of greater opportunity at another club. In one of the more questionable trades in recent times, Collingwood swapped Scotland for Carlton's selection 35, Brent Hall, who subsequently went on to play only one match in his three seasons at the club.

Scotland was one of a number of senior Magpies to move on in one way or another following the second unsuccessful Grand Final on the trot, joining Mark Richardson, , Jarrod Molloy and in the exodus.

Scotland has been an important part of Carlton's team since, and is the only remaining player of the seven acquired by Carlton in that trade week. Scotland plays generally as a midfielder, rotating into a sweeping half-back role, directing the switches.

His 2006 season was stellar, and saw him play every game and rank in the top twenty for Champion Data rankings in the league. He averaged 27 disposals, had six games with 30 or more disposals, a season-high of 33 disposals, three triple-doubles, and had an average of 2.8 tackles per game. He also had the second most disposals in the AFL behind of the Western Bulldogs. Despite these figures, he was overlooked for the team in 2006.

In 2007, Scotland continued his high possession form. He again had six games where he amassed over 30 disposals, with a career-high 41 in Round 22 against Melbourne. He finished a close second in the , and polled a club-high 12 votes.