Acme Fresh Market is a grocery store chain with 16 locations in Northeast Ohio serving Portage, Stark, Summit, & Cuyahoga Counties.[1] It has been locally owned since 1891.

15 company-owned stores and one franchise [2] 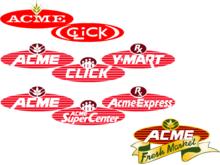 Logo history, including Acme's other stores

Fred W. Albrecht, a native of Massillon, Ohio, started in the grocery business when he gained control of his brother’s local store. In 1891, he opened his own store in Akron, called Albrecht's Grocery. After a visit to Philadelphia, and seeing their local "Acme" grocery chain, Albrecht soon renamed his small corner grocery store to "Acme". He also changed his business to conduct only cash sales. More Acme Cash Stores soon opened around the Akron area, reaching 40 locations by 1918. After ceasing home-delivery operations, Albrecht renamed his stores once again to “Acme Cash Basket Stores.” [3]Acme grew to over 100 stores, both large and small, by the 1930s.

The Great Depression and World War II brought a decline in consumer behavior, and caused Acme to halt its expansion. Following the war, Acme began to experiment in the Supermarket business, opening their first such location in 1952. In 1966, the 75th anniversary of the business, the last of the small corner stores was closed.

In 1965, Acme opened a subsidiary retail chain called Click. The Click stores were department stores with a full sized Acme grocery store under one roof. The first Acme-Click store was in Stow (currently Fresh Market #17). In the 1970s, Acme joined with Youngfellow Pharmacy to open Y-Mart stores, a chain of pharmacy/convenience stores similar to Walgreens. After new competition entered the area, the Click stores were renamed Acme Super Centers in the early 1990s. The Y-Mart stores were renamed Acme Express in 1996. At the end of the 1990s, the Super Centers and Express stores were closed. Some of the Super Centers were converted into Acme Fresh Markets, while others were sold. The Acme Express stores were sold to CVS/pharmacy. [4] This was part of the company's effort to downsize and rebrand the remaining stores as Acme Fresh Market.

As Acme moved away from non-food items and into the Fresh Market branding, many of the stores were remodeled and renovated. One of the first was the Stow location in 1999, which was reduced in size from a Super Center (No. 50) to a Fresh Market (No. 17).

Acme has a long tradition of keeping its stores up-to-date and in good working order. From the mid-2000s to the present, many of the older stores have undergone various renovations. These projects were to help modernize the facilities and to streamline and improve customer experience. The most recent renovations were to the Stow location in 2011, which included a redesigned lobby and parking lot. Other remodel projects in the past five years were at Ellet, North Canton, Bailey Road, Kent, and Kenmore. 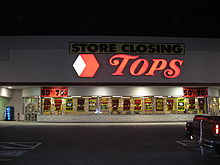 The Tallmadge, Ohio store that closed which now contains Acme #11

On July 6, 2006, one of Acme's competitors, Tops Markets, announced it was leaving Northeast Ohio and seeking buyers for its 46 stores. Eight locations, some of them originally operated as Finast, are in the Akron area. Acme President Steven T. Albrecht indicated to the Akron Beacon Journal that the company was going to "review the Tops Stores" to see if any "fit Acme's goals" [5] Acme No. 11, located in Tallmadge, relocated to one of these former Tops stores across the street on May 19, 2007.[6] On December 4, 2007, Acme purchased another Tops location in Parma, Ohio, which had been empty for one year. The new store opened on May 3, 2008 as Acme No. 20.[7] [8] [9]

In November 2009, Acme opened a new pharmacy inside the Akron General Health and Wellness Center in Stow. Designated Acme No. 30, the pharmacy continues the partnership between Acme and Akron General.[10]

The Acme Fresh Market Savings card is used to receive special discounts and sales throughout the store, and to earn Fuel Rewards.[11]. The card comes in both a wallet size and a keychain size. It currently features a mixed berry background.

In March 2009, Acme Fresh Market teamed with local Circle K stores to offer gasoline discounts. The program first launched at the Parma location, and the rest of the chain followed in May 2009. Shoppers earn rewards for buying select products throughout the store. The rewards are in dollar and cent amounts off the total gasoline bill (not per gallon). Along with the Acme Fresh Market Savings card, shoppers carry a Fuel Rewards card, which is used at the pump to redeem the credits earned.[12]

In 2006, several stores introduced QuickClinics. These small clinics offered patients exams and healthcare with a nurse practitioner. Two years later, ownership of the clinics switched to Akron General. [13][14] After Akron General stopped accepting insurance at these locations in 2010, the clinics were shut down. The rights to the clinics were purchased by a private company, and reopened operations at the Ellet location. The Stow location reopened following an extensive remodel in 2011.

The Acme stores have a wide variety of wine and beer. Seven locations also have State Liquor licenses.

In 2011, Acme started the "Mix-a-Six" program in the beer aisle. This is an empty six-pack carrier that customers can fill with six bottles from a selection of craft beers.

Later that same year, Acme introduced Growler stations at some of its stores. These stations feature several craft beers on tap, which are dispensed into customer-purchased Acme beer jugs.

For Children and Parents

Acme's mascots, Buck the Dog, and his "girlfriend" Buffy, frequently visit the stores and local events. Store managers hand out Kid Dollars, featuring Buck's picture, to the young shoppers. The stores often put on events at holidays for children, including Breakfast with Santa Claus and Breakfast with the Easter Bunny.

The Stow, North Canton, and Ellet stores offered free childcare while shopping, known as Kids' Corners. This service was discontinued in 2011.